"Alternative Sounds" at Coventry Pride 2018 at the CET Popup 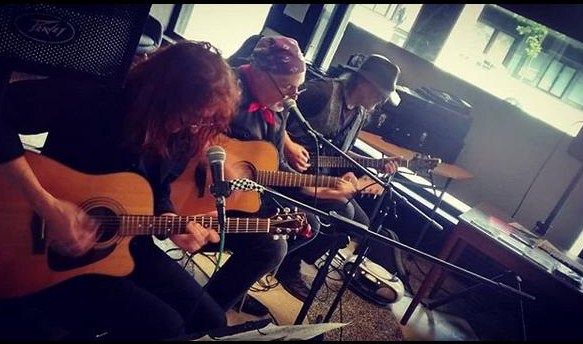 In its relatively short lifetime, the former "Coventry Evening Telegraph" building has become a superb & iconic venue with a tremendous momentum over the past months as the local community grew to recognise its power & potential. It has provided space for artwork for a wide range of artists who might not have their work displayed in more mainstream spaces: students, amateurs, the experimental, the transgressive and even world renowned figures such as John Yeadon whose work raises questions that the mainstream struggles to respond to.

In terms of music, the many weird & wonderful spaces have seen performances & gatherings from people like Synthcurious & the Leamington Home Made Music Society, creating incredible blends of sound & vision within the decaying post industrial environment. ATTRITION have been spotted several times in recent weeks shooting stills & video while access is still possible.

As part of the inclusive & imagination vision of the team, on Saturday the 9th June, the building hosted not only elements of Coventry Pride 2018, but as part of that, an event by the "Alternative Sounds" project. Project artists Crokodile Tears, Keith Fabrique & Huffy plus project supporter Dave Kafka (of the Smashed Vinyls) played sets, the writer of this piece introduced them and spoke about the project and tracks from the "Alternative Sounds" records (plus a few unreleased treats) were played.

Among the many great songs played were several from the "Alternative Sounds" records: Crokodile Tears played "Trains" and "Chinese Whispers", Keith played "Inside Looking Out" and Huffy played "Don't Speak Out". Among old favourites and a few covers, Keith showcased his new album (launched next Saturday at the Humber) "Talk on the Radio", Huffy debuted a brand new song "Airwaves" and Crokodile Tears treated us to several tracks from their upcoming (September) release 'Old Skool'

It was good also to see several other "Alternative Sounds" artists giving their support: Ashley Spindler of Prole Position, Nigel Meffen of Skeet and Martin & Kerri Bowes of ATTRITION.

Videos of some of the performances are at:

Many thanks to Alan Denyer, Clare Allington-Dixon & Christopher Sidwell as well as everyone else at the CET Popup, who played & who came along for making this work so well

Hopefully the setup at the CET Building will be able to set up again on a more long term basis at the "Elephant" former sports centre which would be great: the potential for providing a centre for grassroots, creative, experimental and downright alternative arts & music is enormous and can really help foster local talent.

Tell me: are you "Old Skool"?Crokodile Tears  have been releasing albums now for some 33 years since their eponymous debut when they were known as ...
[2 images] END_OF_DOCUMENT_TOKEN_TO_BE_REPLACED

In the classic rock arena, it's the epic themes that matter, burning casinos, the desperate camaraderie of the battlefield and the countdown to ...
[1 image] END_OF_DOCUMENT_TOKEN_TO_BE_REPLACED

It will not surprise you, i imagine, to learn that a talk by one of our area's most individual & quirky musical talents would be both highly ...
[1 image] END_OF_DOCUMENT_TOKEN_TO_BE_REPLACED

If anyone remembers my article of July 10th in which I looked forward to the Belgrade Theatre's takeover of the former "Coventry Evening ...
[4 images] END_OF_DOCUMENT_TOKEN_TO_BE_REPLACED

A couple of weeks ago, I was mourning the loss of the former "Coventry Evening Telegraph" building as a venue (though looking forwards to the ...
[2 images] END_OF_DOCUMENT_TOKEN_TO_BE_REPLACED