Chalk Drawings at the Town House 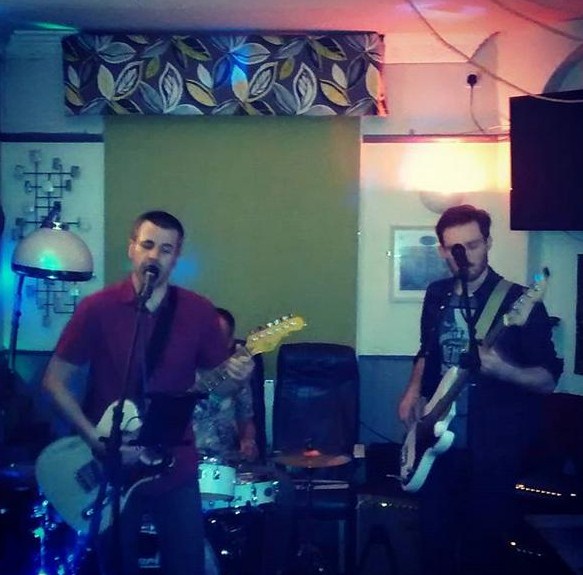 I hope anyone reading this remembers my April 6th review of Chalk Drawings' current (concept) album 'Grand Union'? Perhaps that's a bit presumptuous of me, but I was very enthusiastic about it. I look forward very much to hearing it in its entirety live.

I was fortunate enough to hear a couple of tracks from it last night when the band played the Town House, and they were the highlight for me personally: very powerful, compelling and moving songs.

However, the nature of the gig was that the set contained a higher proportion of cover versions, which is fair enough when played to this standard especially, and although I wasn't counting, I don't think that the covers outnumbered the originals, which I applaud. In fact another cardinal rule of the "originals band play a covers set" was broken by the number of brand new originals aired: all of which seemed to go down well generally. I do think that a healthy music scene while having space for the best covers bands (and we are blessed with some superb ones locally) should also provide as many opportunities for audiences to hear the excellent original material being created.

Another facet of Chalk Drawings' set which I again commend was that the majority of covers fell outside the range of the over familiar: those chose imaginatively, and while arrangements weren't avant garde, nor did they slavishly stick to facsimiles of the originals: each had its own bespoke approach.

Generally, the set probably represented the band at its most funky & r'n'b It was pretty high energy, without dipping into the ballad end of the repertoire which also greatly appeals to me.

The crowd enjoyed the whole set & I personally was delighted that there was a distinct "Alternative Sounds" feel: not only have Chalk Drawings kindly agreed to let the project add one of their songs to a future volume showcasing "the cream of Coventry & Warwickshire music, past, present & future" but in the audience were Taylor-Louise and Faith from Blind Faith, both of whom have also done so. We look forward to being able to share the work of all three superb acts both on an album and hopefully live and it was nice to update them all with our plans & thank them for their support.

In an interesting coincidence, it is a year & a week since I reviewed the album ‘Grand Union' by Chalk Drawings in ‘Hot Music Live'.
[7 images] END_OF_DOCUMENT_TOKEN_TO_BE_REPLACED

Years ago, I am not sure I could imagine myself reviewing a concept album.
[1 image] END_OF_DOCUMENT_TOKEN_TO_BE_REPLACED

I expect we all agree that music can actually do things to us & for us: improve our mood & morale, lift our spirits, transform our psyches.
[2 images] END_OF_DOCUMENT_TOKEN_TO_BE_REPLACED

I have to admit from the start that I found writing a review which captures the essence of Tigermask adequately, having seen him play at the Town ...
[1 image] END_OF_DOCUMENT_TOKEN_TO_BE_REPLACED