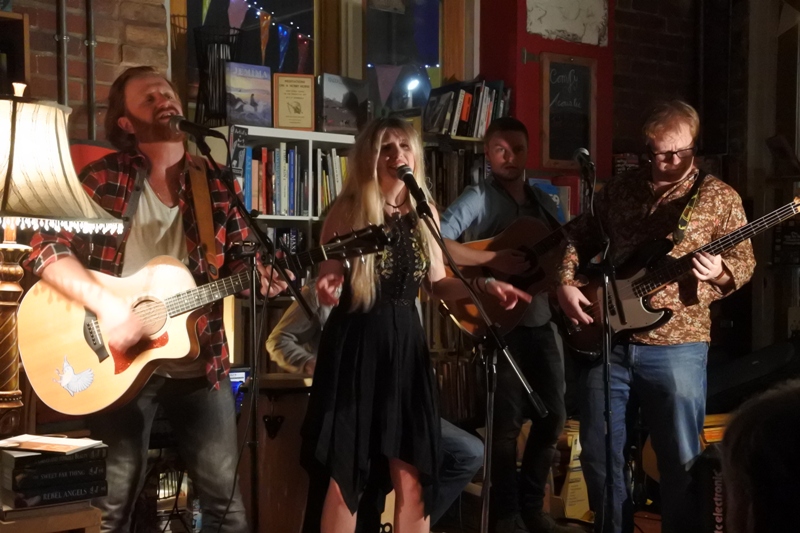 Michael McEntee knows how to pick 'em and his bill for one of his twice monthly "comfy and acoustic" sessions illustrated his talent in this regard on 18th May 2018. Fred's House from Cambridge were the headliners. Although that said, whether "acoustic" was the right term to use for a band, all of which were using amplification with the exception of Paul Richards, the drummer is a good question. He did leave his full kit at home however and in deference to the size of the venue "only" used a Cajon and a tom tom.  The Big Comfy Bookshop is a lot bigger than before, because Michael has doubled the size of the shop. It is much more organised and "comfy" now and can accommodate a larger audience.

Is there a more consummate and professional band in catering for it's core fans than Fred's House?  A gig at The Big Comfy Bookshop in Fargo Village Coventry went a great deal of the way to answering that question with a resounding "Hell No!" They launched straight into a couple of their better known numbers with no preamble giving the audience hardly time to draw breath between the two. Hence "This Little Boy" which seems to have it's origin in a nursery rhyme, (but no such chant that I ever learned in my infancy contained the line, "If you want me, come and get me.") This was followed by another of their favourite vital and lively openers, "Shut Up And Dance." Sadly there was no room for the audience to comply, but Victoria Gavin made up for that in her swirling black dress.

Written by Vikki and Griff (Jameson) at a time when they were listening to a lot of Tom Petty's music, "Fire" which had at certain points a staccato rhythm, precisely timed and in unison by all the band. Indeed they were "burning like fire" roaring out "I don't wanna just another victim of your love. Incidentally I am old enough to remember a singing duo from the 1950's called "Vikki & Griff" but is fair to say they were nothing like Fred's House. The band get their name from the house where they used to gather, of a well known record producer, none other than Fred Cox, then a Coventry lad who has worked with many luminaries in the music world.

Griff triumphantly announced that their new single has been released on vinyl. He proclaimed waving a fist in the air, "after all these years arguing... I won!" The fundamental truth of a single on vinyl, is that it needs a "B" side, thus we were introduced to "Can't We Just Pretend?" A song of frustration with a partner who seems not to pay enough attention and the relationship seemed to be hanging on a knife edge "I'll hold on as long as I can," goes one line. The "A" side seems to be the reciprocal of that sentiment. "You can be my..... go-to guy... guiding light... joker... clown.. But I'll never love you." The single therefore is "Never Gonna Love you"  Sorry Griff, I bought the CD version, you can't play vinyl in the car.

The regular lead guitarist Lachlan Golder was missing for this gig visiting friends (He has friends???) in Germany. Standing in for him and proving what an excellent player he is, was Adam Chinnery. You would never have known he was not a regular member of the band. He is apparently studying Jazz Guitar, but from his performance tonight, he can't have much more to learn. Mr Golder was represented however by "Bonnie & Clyde" a number he wrote for the band and which is well known to Fred's House aficionados and forms the title track of their debut album. Their second being the marvellous "Faultlines."

On the subject of albums, a third is on the cards and will be released "Sooner or Later" which also happens to be one of the tracks thereon. This is another missive about take care how you treat people, because you are certain to get bitten on the bum in the future and may need help.

"Ghost Town" was given it's customary vibrant performance, the "Bab bab bab bab bab bab bab" vocal introduction announces the arrival of another of the fan's favourites. It is the direct opposite of the song of a similar name by Coventry group, The Specials" which was written about urban decay in the city. However the two songs share a sentiment as displayed in the closing line of the Fred's House song, "We don't want no trouble here."   Then we went through a "Bad Place" to a Neil Young cover of "Old Man" Vikki seemed to suggest that Young wrote it about Gafyn Jameson the Fred's House bass player, but I think she was joshing us.

The band suggested they are coming to the end of their current tour, but reference made to www.fredshousemusic.co.uk/#gigs-section seems to provide many more opportunities to witness this band in action. Action is an appropriate term to use for this bunch of entertainers and this is never better demonstrated by their (supposedly) closing number, "Beautiful You."  After a gentle start it morphs into a driving beat and unusually features a vocal performance by percussionist Paul Richards. OK it only lasts a few seconds, but even he will admit it probably needs work. This is not something that can be said about his competence on the cajon. I have never seen another player of that seemingly simple instrument, get anywhere near his level of performance. He gets sounds and rhythms out of that basic looking wooden box that do not seem possible.  He is a pretty nifty drummer too and always seems to have a big smile on his face, he must be the happiest drummer in the world.

All the musicians are masters of their instruments and voices, however it has to be said no-one goes to sleep during a Fred's house gig. It is loud, brash and fabulous. Check them out when they come near you.

When Michael introduced Zoe Wren from London, he indicated that it was the first time that she was appearing at The Big Comfy Bookshop. He also suggested that such was her rising star, that he was likely to be unable to afford her in the future. Zoe is a young singer who writes all of her own material and although a first glance at the lyrics of her songs might suggest that she writes about boys who tick her off, she insists that she is really not like that.  She writes of things that have happened to her, people she has met and of traditional stories with her own bent. Her first song was entitled "London Town" and needs no further expansion on what that was about.

Legends, Myths and folklore of the Scottish islands abound and one such is about The Great Silkie of Skule Skerry, where the creature was a man on shore and a seal when at sea.  a tale of sexual confusion because while the males of the silkie race were irresistible to the island women, silkie-women were no less alluring to the eyes of earth-born men.  Zoe wrote her version of the tale in "Silkie Lullaby."

She met a blind accordionist, a friend of her Godfather, who was busking in Slovenia. He was saving money for a trip to Morocco, because he had been told that this was the best place to find love and cure his loneliness. He had almost reached his target and he felt he was "Just A Song Away" from having enough. It was a sad tale both because of his affliction and the fact that he had such faith in what he had been told. The song contained the arresting line regarding the people walking by, "He doesn't see their faces, but he hears their remarks." How often I wonder, do we assume that because someone cannot see, they happen to be deaf as well? the song gives us all a salutary lesson indeed.

Zoe returned to myth and legend in "She's A Highwayman" taking the story of a woman who, feeling neglected by her lover, hatches a plan to dress as a highwayman and rob him of his riches. In the original story, the lover falls for her all over again and they all live happily ever after. In the Zoe Wren version, the woman likes the freedom so much that she keeps to the life and rides off into the sunset - alone, free to indulge herself. a musical version of "S*d looking after man all my life, -I'm off"

This gives you a flavour of what a Zoe Wren gig is like. Her playing and singing are superb and although at one point, the technology fought back and received the admonishment, "BAD pedal!," her set was a delight. She told a little of her work in prisons leading singing workshops and this led to her song "What If The time?" and heralded "voices still unheard, and stories still to be told."

Her set finished with a rendition of the title of her recently released EP, "Gold & Smoke" where she let us know she had "coins in my pocket and good sense in my head." Long may she continue to do so. Check her out at www.zoewren.com

The opening act of the concert was a trio going under the name of "Threaded" formed in 2013. They are variously from Derby and Birmingham, which must make rehearsals interesting. They clearly managed them somehow, because their blend of violin, guitar and clarinet works beautifully.  They play a mixture of tunes and songs all written by members of the group. Their opening number was "Bridge Of Eagles" which seemed to start off as a jig and then transform itself into a reel, but what do I know?  It was a good start to the set. "The Long Return" demanded a degree of audience participation and soon we were all "Heave Ho-ing" along with Jamie Rutherford on guitar as he led us in the chorus.

One of their new tunes came next, about the anticipation of an event to which the writer is excitably looking forward. "Sooner Tomorrow" is a way of wishing that time would run just that little bit faster - until the next day. "The Blacksmith and The Lady"  is a song which tells of a manual worker who like a certain gamekeeper in a famous D H Lawrence book, allows the Lady of the Manor to fall in love with him. M'Lord is not best pleased with this and seeks revenge. However the Blacksmith turns out to be a ghost and fades away....

How do you write a tune about a poem? I don't know, but between them, Jamie and Rosie Bott (plays clarinet) did. "Hidden Lights" recalls a poem written about a trip to an aquarium and explores the darker depths and unseen corners of the tank where unknown things happen. I give them full marks for imagination and originality on that one. The final song in the set began with Ning-Ning Li strumming her violin like a ukulele for "Left Off." She later returned to more conventional use of her instrument as she sang a duet with Jamie.  It was an interesting first time for me to see and hear them play, I shall look forward to doing so again.  Try facebook and search "threadedjrn."

The first and third Fridays of the month mark the twice monthly shows put on by Michael McEntee at the Big(ger) Comfy Bookshop in Coventry, check out who is on the schedule and tickets at http://www.wegottickets.com/location/14417 otherwise http://www.fargovillage.co.uk/tenants/the-big-comfy-bookshop/ for more about the shop... they sell books too!

Daria Kulesh at the Big Comfy BookshopA concert in which Daria Kulesh appears is no ordinary gig.
[7 images] END_OF_DOCUMENT_TOKEN_TO_BE_REPLACED