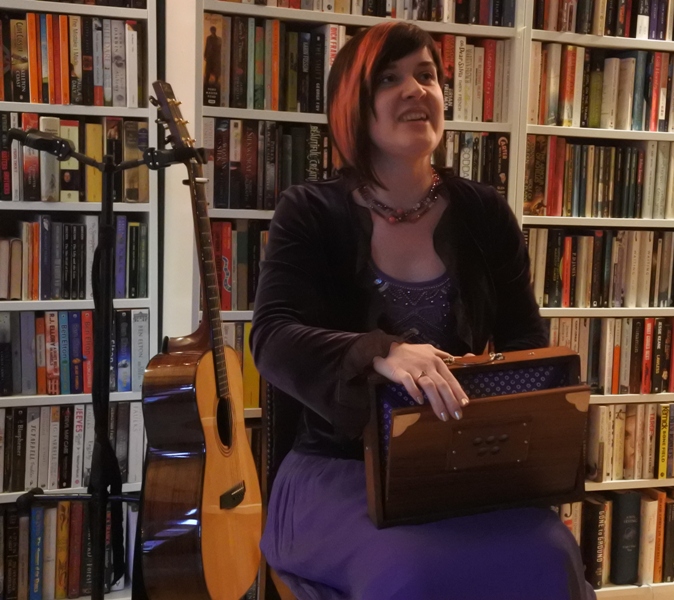 Daria Kulesh accompanied by Jonny Dyer is currently on tour publicising both her "Spring Delights" EP and the fact that a third full album is in preparation for release early next year.  I caught up with Daria shortly after she returned from a multi date tour of Germany.

The intimate setting of The Tree House Bookshop in Kenilworth provided an appropriate venue for an evening of story and song. A Daria Kulesh gig is as much about the stories as it is about the songs.  She always strikes a happy balance between the two and indeed if one or the other were not in place, the atmosphere and indeed the whole event would not be the same. They are not just any old stories either, they almost amount to a history lesson in what happened during Joseph Stalin's reign during Russia's dominance over the states which fell within Churchill's definition of an "Iron Curtain" long before the term was coined.

Most of Daria's stories, which in turn prompt her songs hinge around the Ingush people who lived on the northern slopes of the Caucuses  west of the Urals. People were displaced, tortured and killed by Russian forces. Children were separated from their parents. Indeed Daria's own Gt Gt Grandfather was one of these children, an Amanat.  The definition of the word varies between "hostage" and "gift", depending on the context in which it was used. He was in someway fortunate, because he was allowed books and given an education by his carers and later wrote extensively. Her song "Amanat" describes his life.

That is just one of the stories, each illustrated by a song. Another is "The Moon and the Pilot" a story of romance, her Grandmother's story in fact. Yet another is about "The Panther" a rarity in that a woman was accepted into the precursor of the KGB despite that fact that she was an Ingush, ergo an outsider. She became a a deadly shot and a sniper, but she railed against the treatment of the Chechens and those of Ingushetia and would not take part in the genocide order by Stalin.

This gives a flavour of the evening. Not all of the songs are of doom and destruction, the products of Sandy Denny and indeed Bob Dylan put in an appearance.  Daria's powerful soaring voice captivates the audience and Jonny Dyer's dexterity on guitar, piano and bouzouki enhance the musical content for the benefit of those fortunate enough to be present.  Details of where you can catch up with this fabulous artist can be found on the website. www.daria-kulesh.co.uk/gigs  with dates going through right into 2019, there must be somewhere near you.

As with all Daria Kulesh gigs, moments of humour abound. Like the time she was booked to appear on a vast stage, in front of thousands. So dressed to the nines in evening shoes, and long gown, she found herself in a muddy field pretending to plant a tree whilst miming to one of her own songs. She did make it to the big stage - just a little late. Make a note to see her and have a thoroughly enjoyable and instructive evening.