We don't yet know much about Carrick.
Get in touch and we'll add some details. 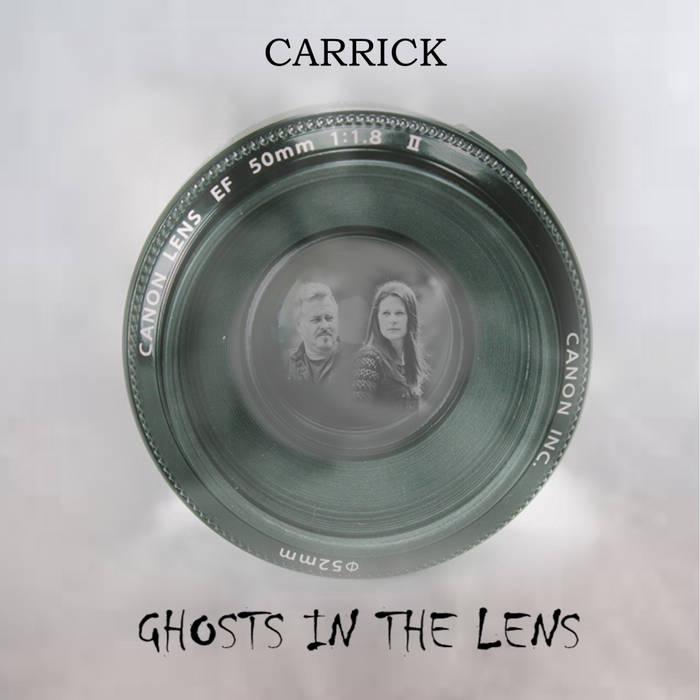 When I reviewed the Carrick single "Stay at Home" just over a year ago, (you can also find it on ‘Hot Music Live Presents Volume Five'), I mentioned that in due course it would feature on the duo's second album, ‘Ghosts In The Lens'. Well here we are at the release of that record which includes the tracks "Wait For You", "The Captain's Tale", "No One", "Brick Lane", "Dark Descends", "God Knows Why", "Through A Lens", "As the Tide Rolls (Haul Away)", "Running Aground" and as predicted, "Stay At Home".

Following their  2016 debut ‘Face To Face', like that album, ‘Ghosts In The Lens' is intended to showcase their ability to create original music (their live sets mix their own songs with a staggering range of covers: few folk duos can be expected to play so many tracks from so many genres including hard rock, soul & punk).

Of course with the experience & expertise that Caroline Dyson (flute, cajon, bodhran, ukelele bass and fiddle) and Rich Howell (guitar, mandocello and tenor guitar) bring to the musical table, they have the capacity to write & perform pretty much how & what they like and while clearly they root their music within the fertile soil of a still growing tradition, I appreciate how their self description of "modern folk" permits them to interpret the broad genre & enrich it from whatever other source takes their fancies.

Given too that they spent as long as was necessary (three whole years) to craft it precisely as they heard it themselves (and this of course "allowed" the inclusion of the pandemic inspired single which was created during the process), you get a very high class artefact which works on several levels.

If you are among the many people who enjoy Carrick's live act, you can simply be entertained by the songs as each is immediately accessible & works its magic instantly upon you. Hopefully while this is happening, an appreciation may also grow within such listeners that however fresh a cover version might be when you are out socially listening to music, there is something extra special about the creation of new songs & future generations will be as enriched as we are if the canon of music continues to expand and offer new opportunities.

For those who like to listen intently to music they have not heard before, there are offered to you further joys: both musically & lyrically. I personally have always had an issue with those folk hard liners who sometime in the 1950s & 60s more or less declared the tradition locked & closed at an approved repertoire & style. I see "folk" as a popular format which reflects its times & places and thus evolves in content & form to tell new stories in ways contemporaries can relate to & ultimately aspire to perform themselves, even if they fall a little short of the talents of the original performers.

Thus the songs on , ‘Ghosts In The Lens' speak to our current times as much as the legendary past & can be related to a wide ranged audience: they also are readily capable of being covered by others and without the need to do so via jamming a finger in your ear nor donning an Aran sweater.

It's music created & performed by virtuosi but aimed at real people.

As I wrote when reviewing "Stay At Home" last year, "..this is an excellent song which I'm sure will resonate long after the events have hopefully passed & which can act as a cultural testament for these times.." and while this is the most overt COVID19 tune in the collection (I don't know which of the others were written before the pandemic), one cannot help reading other references to our times in some of the others (at least I can, and it's something I am rather prone to do these days).

What is striking however is that overall it is quite a sombre collection (there is no rollicking dance/celebration number such as appear in their live set in there) and maybe one can take that is less of a comment on our times than a reflection of the state of mind of two writers attempting to pen new songs during this period: though to be fair, ‘Face To Face' was pretty sombre for the most part too. Carrick do seem particularly attuned to the sorrows of this world & compassion for it & I suppose the title of the album suggests a mission to capture a flavour of our times..

Some tend towards the more traditional narratives such as "The Captain's Tale" while others like "Wait For You" or "Brick Lane"   present more contemporary tales.  Yet others like "No One" or "Dark Descends" defy time classification entirely.  In line with all great folk music we get the lows of tragedies small & great ("God Knows Why") : and each is enhanced with another of folk's enduring characteristics of emphasis. If you can listen all the way through "Dark Descends" without a little moistness in your eye then you have a heart of stone: it's a great song & maybe a potential single? We even get three maritime numbers to ensure it's a "proper" folk album.

What strikes me though listening to the whole album is the stunning internal variety: for those who (understandably) view genre based albums as necessarily having a certain homogeneity, this collection firmly refutes that notion.  It is not simply the influences from other musical traditions: it is the incredible detailing within the songs. There are so many different instruments deployed (and never too many at once: each is clearly discernible & plays a vital role in the arrangement) in varying combinations, vocal harmonies, different tunings etc.

"Folk" is a living traditional and thankfully there are quite a lot of great musicians who treat it as such: including within our own currently vital local scene. Carrick are at the forefront of this. They delight many audiences and I just hope that a good percentage of those who enjoy the live performances take note of the originals in the sets, go away & acquire a copy of  ‘Ghosts In The Lens' for subsequent re-listening as it certainly repays such close attention. 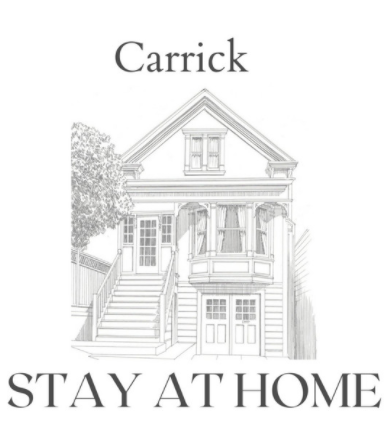 This morning's news is that Carrick have just released their new single "Stay at Home", which will later appear on their forthcoming second album, ‘Ghosts in the Lens'.

Although Caroline Dyson & Rich Howell bill themselves as a "modern" folk duo (and the covers aspects of their live act certainly transcends both genres & eras in such a way), this latest release is extremely traditional & classic in sound. As the subject matter (as you'll have guessed from the title) is very much contemporary in inspiration, this juxtaposition of the old & the new gives the track extra power & by setting our current struggles within the much broader framework of the age old role of folk music to record the narratives of affliction, it gives an extra layer of meaning to both the song & our personal understanding of how the pandemic fits into our history & sits alongside what our forebears had to endure.

The song itself, quite apart from the above attributes is really well wrought & executed; thoughtful & articulate lyrics which address the impact of COVID19 on a variety of groups with empathy & understanding as well as a delightful clarity of expression, set above an equally clear & suitably restrained accompaniment. A cool & sympathetic vocal delivery, augmented from time to time with harmonies for emphasis & an ongoing woodwind motif which injects the poignancy part of the song, this is an excellent song which I'm sure will resonate long after the events have hopefully passed & which can act as a cultural testament for these times. 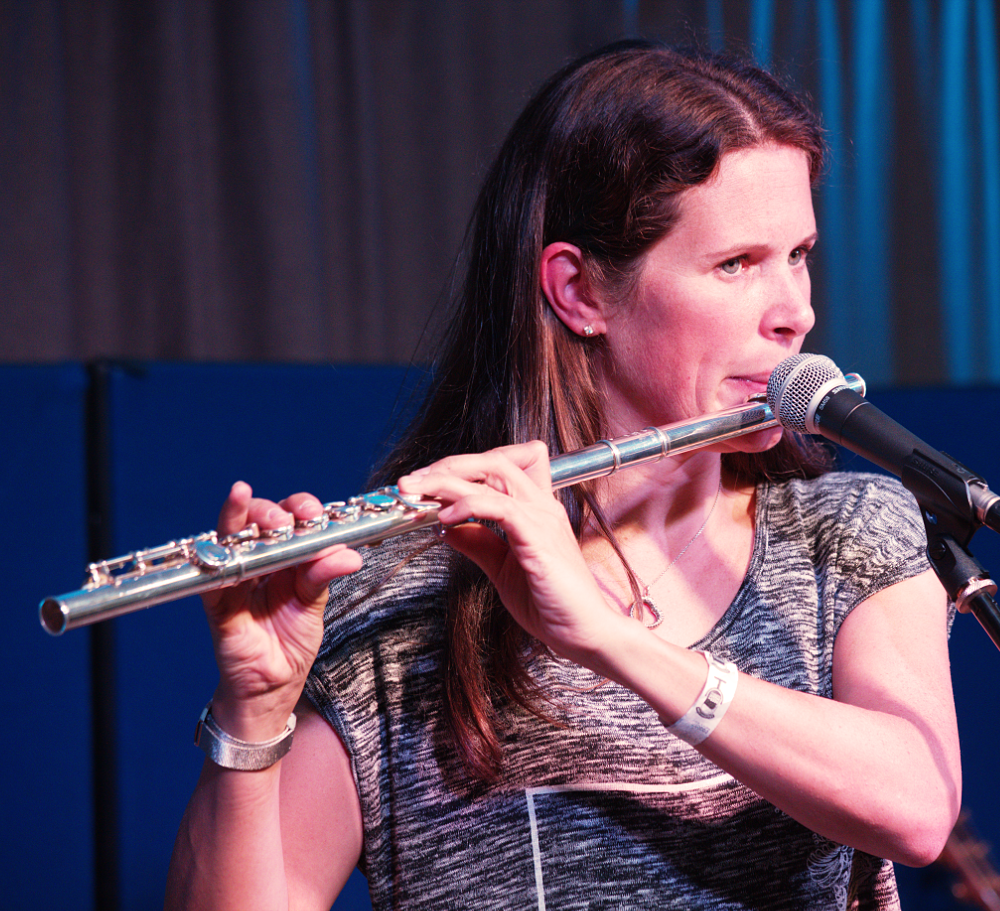 1 of 8
An excellent folk-pop workout from the lively and charming Carrick who persuaded a hall packed with real-ale fans to sing along with 'I would walk 500 miles'. Actually, the beer selection was very very good and little persuasion was needed.