Matthew has written about the following acts:

To link to this page, use the URL http://www.hotmusiclive.co.uk/MAGAZINE/magazine/contributor.php?writer=Matthew 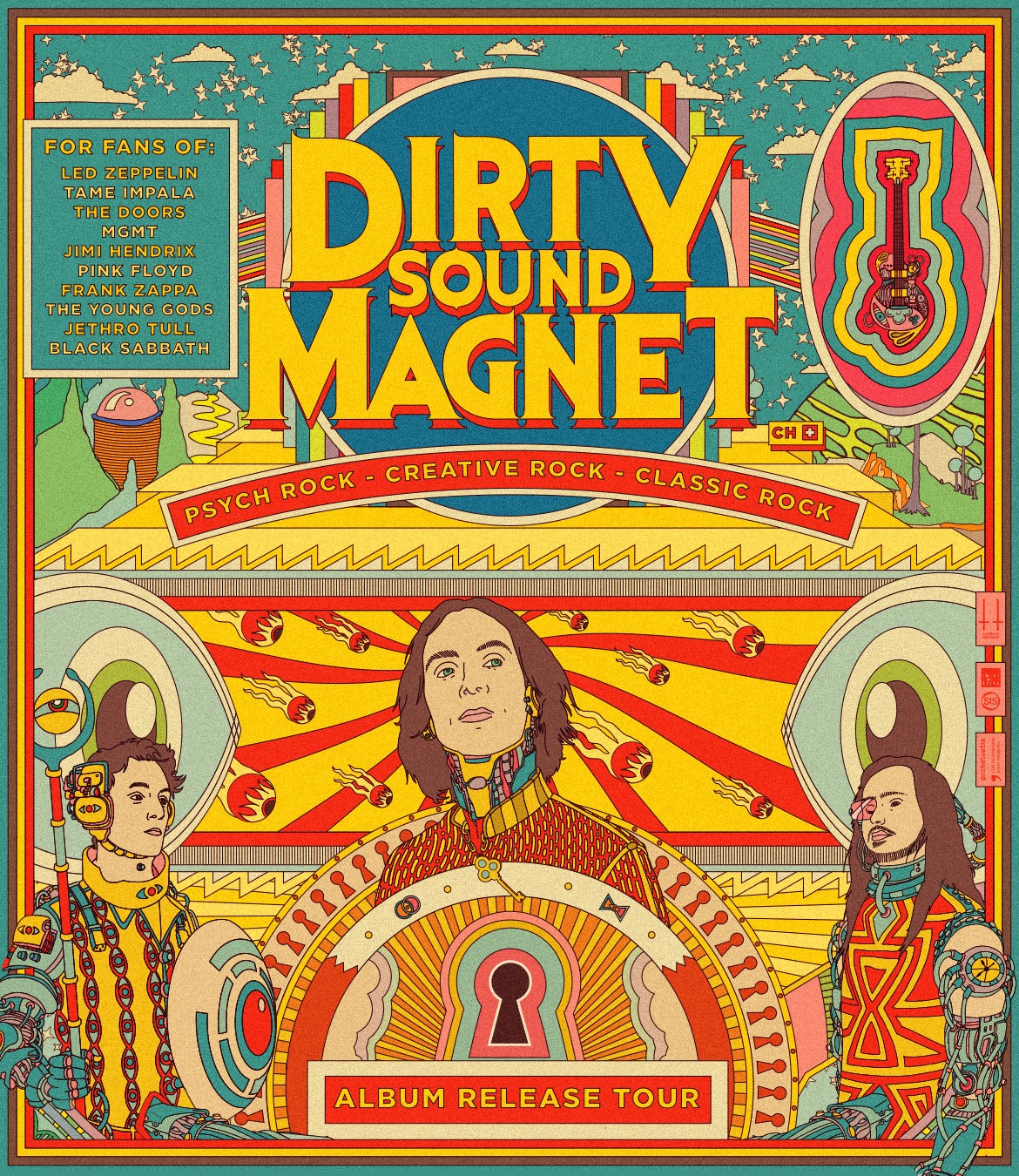 On Friday 29/11/19 Dirty Sound Magnet will hit The Tin Music and Arts with support from two fantastic local acts, Satsangi and Tamarack - Presented by Catch 22 Promotions.

Dirty Sound Magnet is a psychedelic rock power trio from Fribourg, Switzerland. The band's DNA can be traced back to the ancestral ‘Golden Age of Rock' (60s, 70s), but it would be incorrect to think that DSM is..."retro". The musicians are inspired by contemporary artists and modern production techniques; pushing the boundaries as they see fit. The results are personal, unique and original. Simply put: the Dirty Sound Magnet experience is a mystical journey back to the future…

In 2017, DSM released its third album, Western Lies. The results were instantaneous, with the band winning an award in the category of "best Swiss rock song" for their single ‘Homo Economicus'. Between 2017 and 2019 the band toured relentlessly, playing over 200 shows internationally. Their new album, titled Transgenic, was released on the 18th of October 2019.

Support from Leamington Spa psychedelic rockers Satsangi and Warwick University band Tamarack. Satsangi play "world influenced pysch-rock-n-roll'. With three albums under their belt they have gigged with the likes of The Kills, Dr Feelgood, The Primitives, Saint Agnes, Fields, The Moons, plus at multiple high level festivals. Tamarack are a pseudo post stucturalist progressive rock band. Focusing on exploring the world that has slipped between the cracks through kalaidascopic soundscapes and soaring melodies.

14+ show, under 18s must be accompanied by an adult 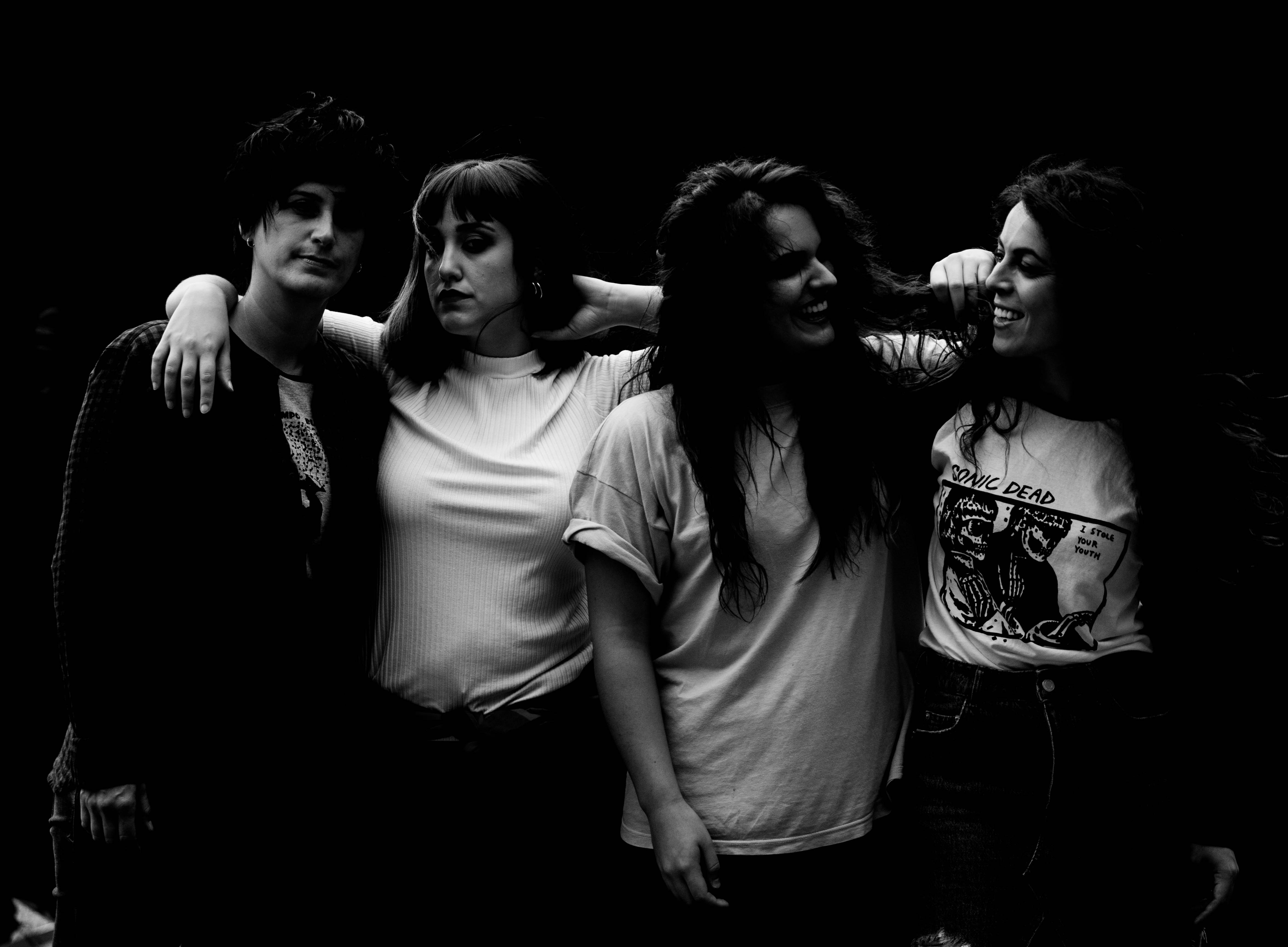 An incredible night of rock music hosted by Catch 22 Promotions!

Agoraphobia are the new trailblazers of Spanish Alt-Rock. After winning various awards in recent years, 2017 saw them release their first LP ‘Incoming Noise', leading to an extensive European tour that included their first visit to the UK and appearances at renowned festivals such as Mad Cool Festival in Madrid and SXSW festival in Austin, Texas.

Their stunning live performances have helped them to quickly earn a large, loyal fan base - When you see them expect a dynamic powerhouse that can sway from crunching riffs to reverb soaked melodic breaks, always accompanied by soaring pitch-perfect vocals. September 2019 will see them release their second album 'Unaligned', before they set out to make further UK appearances in October.

Support from The Smoking Kills, Just For Now and Women Gone Missing. The Smoking Kills: A grunge-inspired, Peruvian-Polish, freshly formed three-piece based in Coventry, UK. Just for now: A Birmingham based grunge Band. They take inspiration from bands like Nivarna, We Are Scientists, The Wombats and many more. Women Gone Missing: a noisy rock band from Leamington. 60s psych and blues have been dragged kicking and screaming to the present day, with pit stops at doom, punk, and grunge. They're heavy, dark, and foreboding, but with a groove to latch onto. 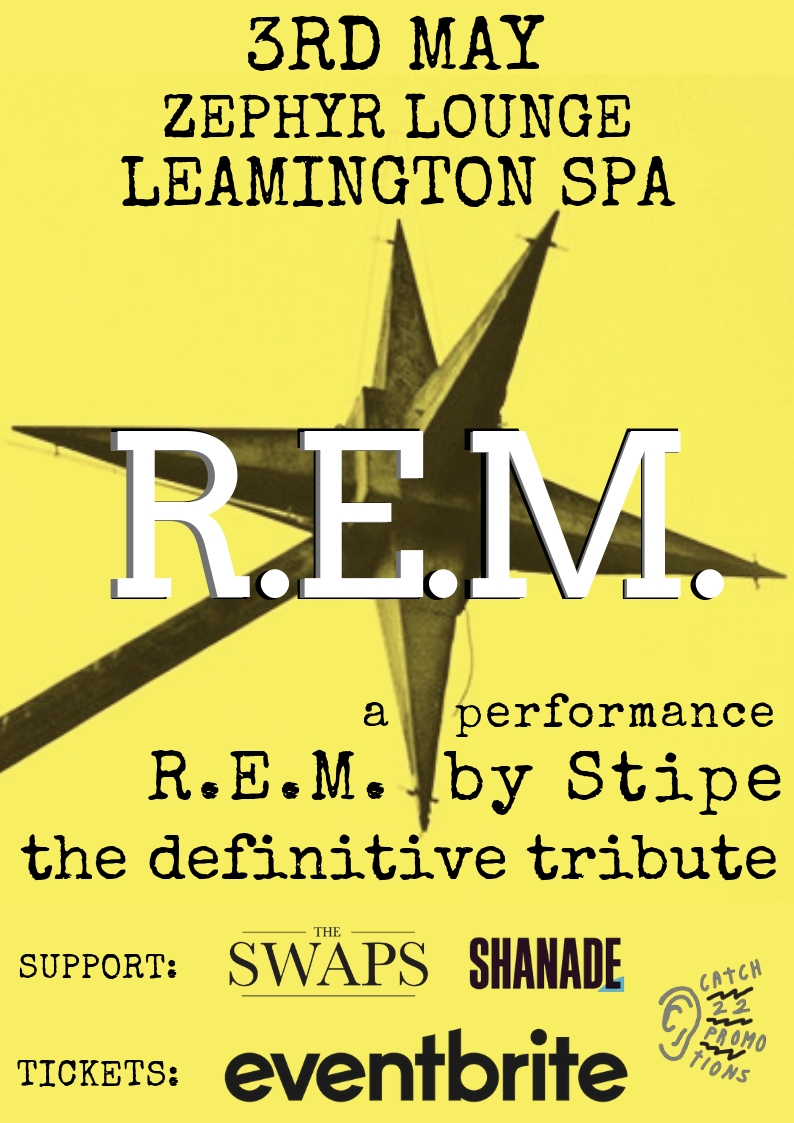 R.E.M. remain one of the world's most enigmatic stadium rock bands. With a string of peerless albums running through the 80s and 90s; one eye on the underground and one eye on the soaring chorus; it's safe to say we will never see their like again.

Whether it's laying major festivals or appearing on the One Show, performing for Michael Stipe himself, Stipe are the definitive R.E.M. tribute – a complete 6 piece band, and encyclopaedic knowledge of the back catalogue, the boys from Athens' legacy is in good hands.

Supporting will be The Swaps and Shanade. The Swaps - Swoopy melodies, unexpected turns, boogaloo drive and waltz-time swing, the band deliver disco blues, folk-pop turbulence and Delta honk to an increasingly infatuated population – live and on local and national radio.

Shanade is an up-and-coming singer/songwriter with a powerful, soulful voice, known for her captivating performances. Her music pairs classic song-writing and heartfelt lyrics with a gutsy modern sound. 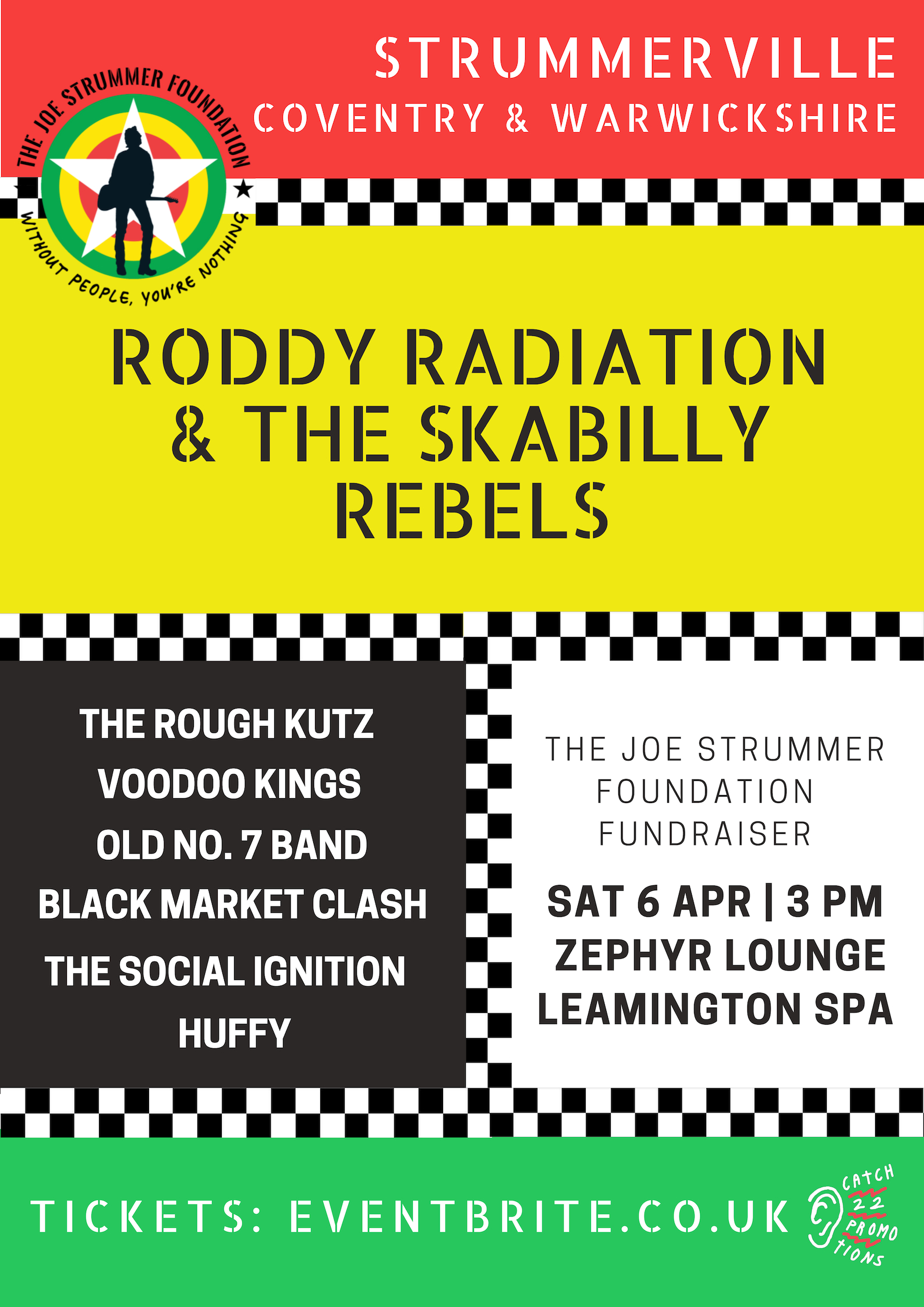 On 6th April 2019 Catch 22 Promotions in association with The Joe Strummer Foundation will present Strummerville Coventry and Warwickshire! A full day of Ska, Punk, and all things in between at Zephyr Lounge in Leamington Spa headlined by Roddy Radiation and the Skabilly Rebels. Also featured will be The Rough Kutz, Voodoo Kings, Black Market Clash, The Old No. 7 Band, The Social Ignition and Huffy. An event packed with brilliant bands, and to top it all off raising money for a great cause. 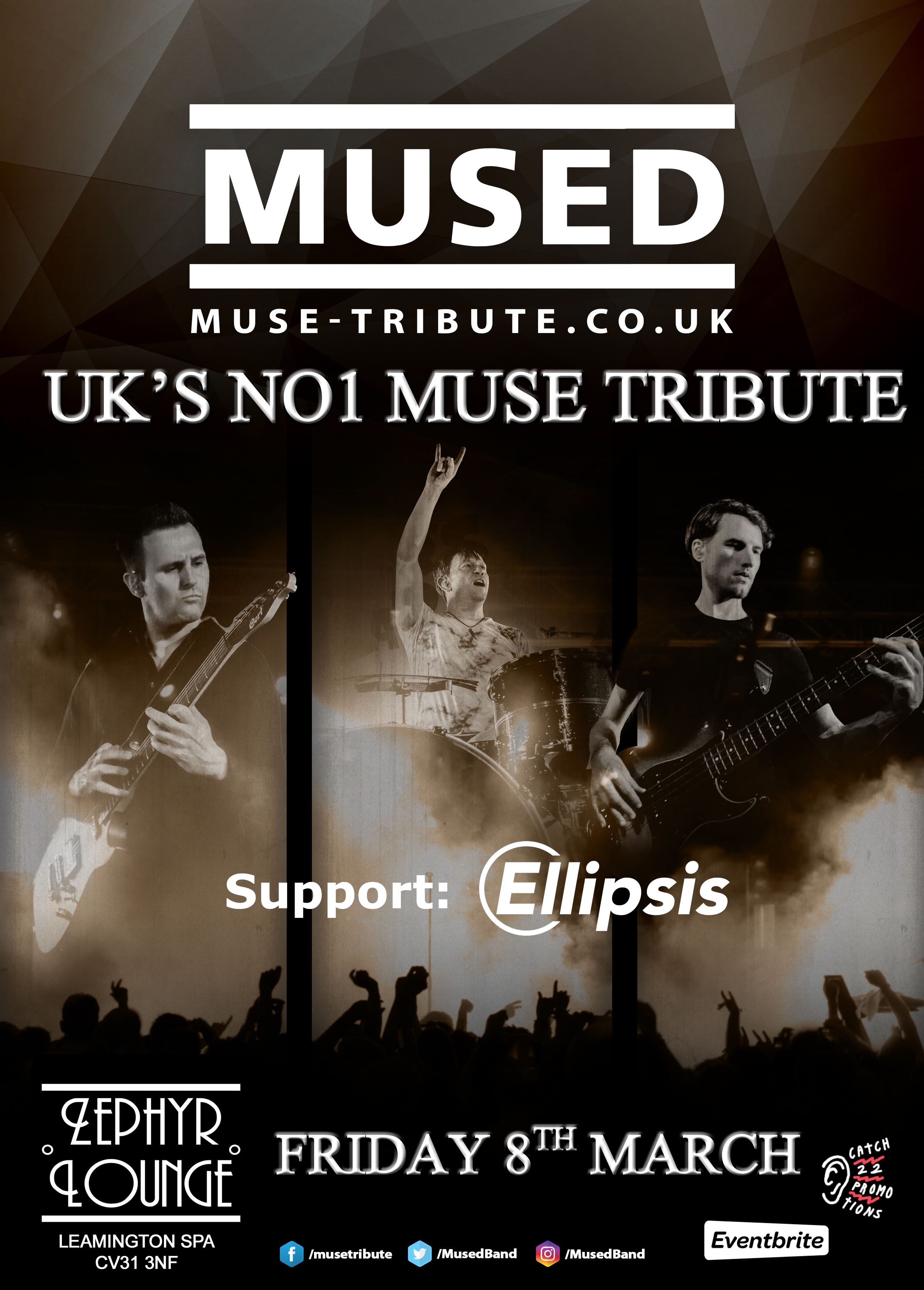 MUSED, the UK's Number 1 MUSE tribute band will be performing at Zephyr Lounge Leamington Spa on 08/03/2019, presented by Catch 22 Promotions.

Mused are a UK based professional tribute act who excel at providing an authentic Muse concert experience. Muse themselves now rarely perform at anything smaller than arena capacity, and Mused offer the opportunity to get up close to the action!

They accurately recreate all of the favourite Muse tracks, and like Muse, rather than playing them exactly like the studio recordings, perform all the extra bits including the "improv" parts in-between songs just as Muse do when performing live, thus creating a true Muse live experience! From the moment the show opens to the encore you will believe you are listening to, and watching Muse themselves!

The band's set list compiles songs from across all Muse's studio albums, from Showbiz to Simulation Theory. 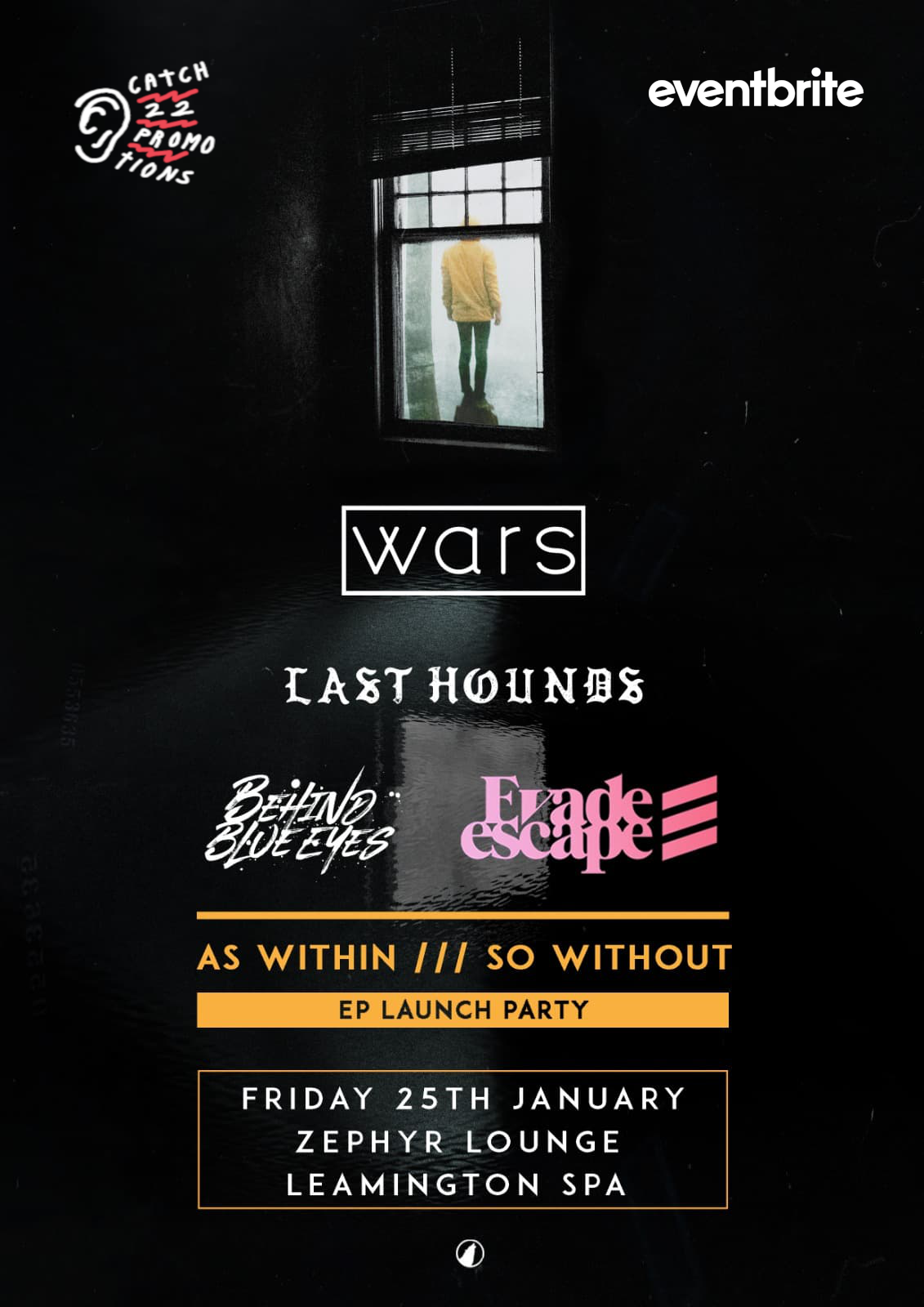 Catch 22 Promotions has put together an amazing 4 band bill at Zephyr Lounge in Leamington Spa on 25th January to celebrate the release of Warwickshire rockers Wars new EP, ‘As Within /// So Without'. The band have been winning national acclaim recently, featuring on the BBC Radio 1 Rock Show and playing at Wembley Arena as part of a huge event.

Wars are a 5 piece post-hardcore band, whose music tackles the conflicts we all find inside ourselves. From nuanced reflections on existentialist philosophy, to the outright catharsis of chaos, wars use their music to confront, question and extinguish the deepest demons. Since releasing their debut album ‘We Are Islands, After All' in 2017, Wars have been carving out a sound and space fit for their future.

Last Hounds are a 5-piece Hardcore Punk band hailing from the Midlands. Mike, Tom, Ben, James and Chris combine to create an energetic sound, fusing influences such Gallows, Letlive and Frank Carter and the Rattlesnakes as well as a vibrant mix of old school Hip Hop artists.

Behind Blue Eyes are a metalcore band who formed in London during the summer of 2016. Since then, they have toured the UK and Europe consistently, making a name for themselves through their hard-hitting, energetic live performance.

Hailing from Warwickshire, Evade Escape offer a fresh blend of modern rock loaded with all the hard hitting riffs and infectious melodies! Fuelled with pure passion and a relentless energy, it's time to launch into the scene guns blazing!

This is a 14+ event, under 18s must be accompanied by an adult

Tickets can be purchased by following this link: Tickets