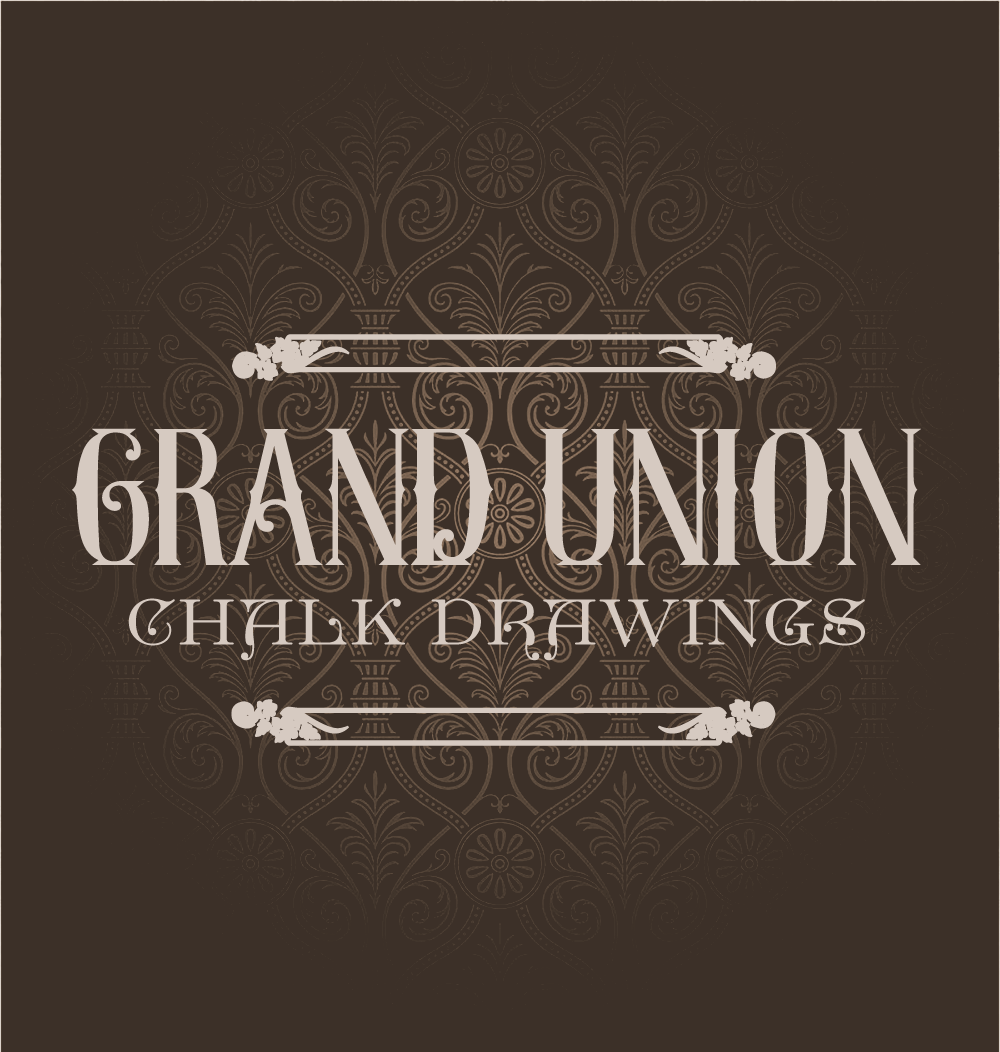 Years ago, I am not sure I could imagine myself reviewing a concept album. I guess the concept of a concept album has been around a long time (presumably "A Love Supreme" must be one) and of course when pop music evolved into rock then bands looking for the next step "forward" produced some great ones. It was the subsequent descent into pomposity & pretension that rather sullied the expression for many people though: myself included.

However in recent years, Coventry & Warwickshire can hold its head up high in terms of  some excellent concept albums: even if that's not always the terms the artists themselves use: sets like "Millions of the Mouthless Dead" & "All Mine Enemy's Whispers" by ATTRITION, "12 Songs" by Two Giraffes & Kel Elliott & Her Three Man Orchestra's album of songs around Chedham's Yard in Wellesbourne are superb examples of suites of songs around a theme & I defy anyone to criticise them in my hearing.

The latest in this respect is Chalk Drawings' album "Grand Union": a narrative set of songs released just before Christmas, telling the story of two individuals & their relationship. The album title works on several levels: there is a title song but in the song "Exquisite Night", reference is made to a bar in Leamington of that name (which did in recent years actually exist, it was a good music venue too but no longer exists under that name: it's now Apehangers under Procaffeinate) which of course in turn takes its name from the famous canal, yet I imagine the main reference in the title is to that of the bond between central couple.

In a tale wending its way from 1939 to 1975, the narrative arc encompasses war, love, ecstasy, separation, reunion, marriage, parenthood, loss & redemption in ten songs plus a partial reprise of the title song.

Obviously within this, the story ebbs & flows with finer detail which is impressive. It's a sort of musical version of Proust or "Dance to the Music of Time" I suppose, albeit on a more intimate scale: indeed like the latter, the imagery of a turning wheel (of life) is central.. That scale seems to determine the musical setting which is appropriate to such a narrative. The instrumental arrangement is tasteful, subdued & is more of a setting to the lyrics than overwhelming them (and overblown arrangements were part of what gave the "concept album" a bad name in the 1970s: that & pretentious lyrics, which these certainly aren't: instead they are elegiac & elegant with a sense of restraint: probably echoing the culture in which "Alfred" & "Millie" were supposed to have lived, when expressing emotions through the "less is more" approach). I can see why Chalk Drawings & Blind Faith enjoy working together as both seem to share a belief in avoiding over fussy arrangements & letting clarity prevail, with plenty of the space in songs which I prefer & which encourages dynamics to thrive. Since the quality of singing & playing is excellent on "Grand Union", there is no need for layering on extraneous embellishments & the material is all the better for this. Yes, the arrangements are discreet, but this firstly allows the variety of tone, which keeps the album interesting & engaging, to emerge simply through musicianship & not production & secondly is a better reflection of the story being told. In fact as the action shifts from fairground to POW camp, to dance hall to home to cemetery (with plenty of other stops along the way), the musical action shifts accordingly with folk, jazz, swing, soul, rock, blues & even music hall tinges.

At this point in a review, I expect normally to move into a look at standout tracks. However I find this quite difficult on this occasion: firstly because all the tracks sound equally good to me & secondly because I wonder if I should single individual tracks out from the wider context of a complete & unified set (I know Pink Floyd get upset about this sort of thing too). I am sure each one on "Grand Union" could stand on its own merits, but they do work well interacting as intended. That said, the band have produced a video for a single track, "Rag & Bone (you can view it here: https://www.youtube.com/watch?v=1nG1i6O0UgQ&feature=youtu.be). Also, I'm stuck with making some sort of a choice as Chalk Drawings have kindly allowed "Alternative Sounds" to use one of the tracks on a forthcoming volume of the cream of Coventry & Warwickshire music, past, present & future. Certainly "Rag & Bone" is a very catchy track: perhaps at the more upbeat end of the spectrum on the album, (along with "Ain't Nobody" in that respect) but then the title track is central to the album's whole being: in terms of narrative, imagery & also its emotional tone."Last Letter" and "Exquisite Night" offer the more heartrending end of the scale. But as I say: there is only one real way to get the most out of the record: play it all & play it in the right order. Then play it again as I did.

In an interesting coincidence, it is a year & a week since I reviewed the album ‘Grand Union' by Chalk Drawings in ‘Hot Music Live'.
[7 images] END_OF_DOCUMENT_TOKEN_TO_BE_REPLACED