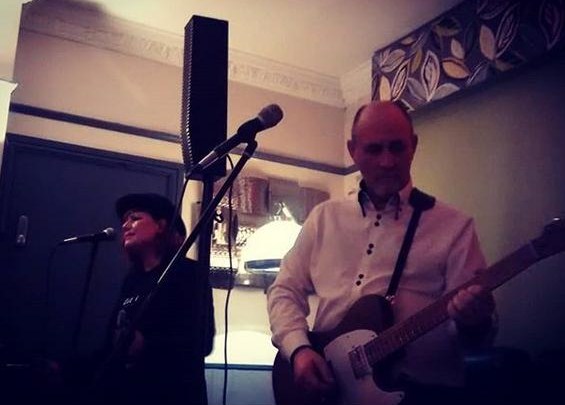 The law of averages suggests that many "Hot Music Live" readers will have seen & heard Holly Hewitt (vocals) & David Page (guitar & vocals) perform though probably not necessarily under their own names, but instead as part of one or more of their myriad projects. So many are these and so dynamic (new ones are added & each one itself evolves: nothing is static let alone complacent in their world), that in order to make this review as accurate as the band & readers deserve, I sat down with them both just to get my bearings on where they are as of January 2018.

Tonight, they were performing as "Retroville" at "Tunehouse at the Townhouse" (a second great gig of the year in this series after last week's superb South Town performance kicked off 2018). "Retroville" is the intended counterpoint to their "Gloria Sunset" set: the latter being orientated (in theory) around earlier, jazzier, swing type material & the former within a later set of periods including rock etc. In fact even this distinction is no more than an indicative guide to what you might hear: "eclectic" barely does justice to a set which encompasses Cab Calloway, Guns N' Roses (a cracking country version of "Sweet Child o'Mine") via Billie Holliday, Robert Palmer, Aretha Franklin and many others: no two consecutive songs belonging to any one genre or style: in fact many songs have been rearranged into other styles from their original one anyway. To cap that, the band have decided to move away from using backing tracks (each lovingly constructed by David in his home studio rather than purchased) to a fully "no safety net" set. With their skills, this is an obvious move which I'm looking forward to & tonight a most poignant version of "The Tennessee Waltz" gave us an inkling of their new direction.

Holly & David were also founder members of local country supergroup "Honky Tonk Rose" with such luminaries as Horace Panter & Malc Evans (though pressure of their other work has led to their moving on from this band recently) and they also have a blues band the "Hounds Blues Band" with DTs bass master Craig Rhind joining them to create a trio lineup. Add to that their separate work performing for residents in care homes (and listening to them talk about this side of what they do really tells you all your need to know about their personal & musical values) and Holly's recent work guesting with the "Dirt Road Blues Band" supergroup (Steve Walwyn, Sir Horace again & Ted Duggan plus Patricia Moore, Mark Feltham & Holly as guests) and you begin to get a feel for how incredibly active they are: and that is not even taking account of their substantial work for private parties & functions (as "Gloria Sunset" outstripping their public gigs) and retro events such as 40s nights & "Peaky Blinders" themed parties.

As noted above, they roam through their favourite songs at will, keeping the set fresh & audience engaged with constant shifts of tone & style. They believe strongly in playing songs likely to be less familiar to audiences, whether by less well known names (such as "If It Hadn't Been For Love" by Chris Stapleton)  or by avoiding the cover band staples of famous artists in favour of more obscure numbers. Soliciting audience participation must be a reasonably risky strategy in any event, especially when it descends (ascends?) into playful tongue twisters, but tonight's crowd certainly played their honourable part in "Minnie the Moocher": or at least as far as anyone could be reasonably expected to go. I urge you to check Holly & David out in at least one of their guises & preferably the full set to get the most complete picture of all they are so capable of.

Next stop?  Apehangers on 10th February

It was nearly a year ago (January 28th 2018) that I reported in the pages of "Hot Music Live" that Holly Hewitt & David Page of Retroville were ...
[3 images] END_OF_DOCUMENT_TOKEN_TO_BE_REPLACED

I expect we all agree that music can actually do things to us & for us: improve our mood & morale, lift our spirits, transform our psyches.
[2 images] END_OF_DOCUMENT_TOKEN_TO_BE_REPLACED

I have to admit from the start that I found writing a review which captures the essence of Tigermask adequately, having seen him play at the Town ...
[1 image] END_OF_DOCUMENT_TOKEN_TO_BE_REPLACED