Chris Sidwell speaks out & sings too 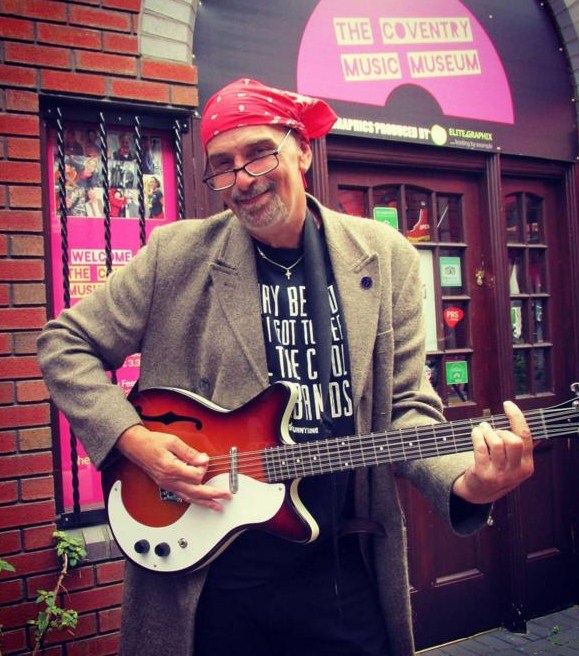 It will not surprise you, i imagine, to learn that a talk by one of our area's most individual & quirky musical talents would be both highly fascinating & greatly entertaining.Chris Sidwell, talking as part of the Big Lottery funded "Sounding Off" series to Pete Chambers BEM at Coventry Music Museum, covered the length & breadth of his distinguished career.From childhood influences such as The Beatles, Syd era Pink Floyd & the theme to "The Big Country", the precocious talent of Chris led him at the ages of 10 to start creating (and taping) musical experiments, mainly of a percussive style rather than his later highly melodic approach, using household cooking utensils & cheese wire (a high risk strategy). With a diversion to learn the "Ode to Joy" on the piano (not an instrument he has played since), he settled on the guitar, which instrument he played in the proto-Indie band The Digital Dinosaurs while teacher training in Birmingham. This group, reviewed in the legendary Coventry fanzine "Alternative Sounds", drew also on a pool of five guitar playing brothers, which a maximum of two at a time appearing with the band at any one time.On returning to Coventry, Chris put together the iconic Crocodile Tears (both his bands did overlap for a short period), working with the cream of local musicians most of who were Pink Umbrellas, such as Steve Edgson, Paul Sampson, Barry Jones & Robin Hill. Their debut album, if you have it, is worth a bomb on Ebay, especially in the USA.Growing family commitments & Paul Sampson's many other commitments ate away at this band and Chris continued teaching: a whole range of subjects including Geography & French where he confesses his own knowledge was stretched considerably. He also was convinced by his publisher, the legendary Jon Lord, so stand as a candidate for the Monster Raving Loony Party. (technically he stood as candidate for "Captain Rainbow's Crocodile Tears Monster Raving Alliance" His ingenuous reply to a reporter that his main aim was to promote Crocodile Tears records led ultimately to the cost of candidates' deposits being heavily increased: leaving his mark on British democratic history.Eventually, Chris (re)formed his band, renaming it (slightly) as Crokodile Tears to reflect that it was a new lineup, with Chris & famed multi-instrumentalist Alf Hardy as the core. His philosophy for this band was to write songs either about children or about adults acting like children.Pete then took him through the albums they have recorded such as "Dodo-ism" "Go for the Jugular" Gullible's Travels" (a retrospective) "If Hippies Ruled the World" (cited by Pete as "probably their best album" in the ‘Coventry Telegraph') and "Maid in Meriden", all of which Chris outlined in terms of the process of creation & the songs within them. Most are available for sale at the Museum.I haven't even mentioned yet other fascinating excursions such as the Tears backing Screaming Lord Sutch (his party leader) nor his on-going friendship/song writing partnership with Graham Fellows ("Jilted John" & "John Shuttleworth") whom he brought into the Museum recently and his work with famed Coventry bassplayer/singer Cary Lord (daughter of Jon and formerly with cult band L'Homme de Terre) for Blush.Chris was kind enough to play two songs: the cult fan favourite "Trains" and the brand new "Kids". The former is being rerecorded with additional harmonies by Chris' grandchildren (which they devised themselves) as part of the upcoming Martin Bowes produced album for Coventry Music Museum: "Alternative Sounds" (which kind of brings the story full circle if you return your eyes to the top of this article). Chris talked us through the genesis of each song: the former about declaring his love to a former girlfriend only to have it drowned out by a passing train at the bottom of her garden, the latter about his "first love".Photos & film of the session can be found on the Coventry Music Museum's Facebook page https://www.facebook.com/groups/Covmusic/
Web

Tell me: are you "Old Skool"?Crokodile Tears  have been releasing albums now for some 33 years since their eponymous debut when they were known as ...
[2 images] END_OF_DOCUMENT_TOKEN_TO_BE_REPLACED

In the classic rock arena, it's the epic themes that matter, burning casinos, the desperate camaraderie of the battlefield and the countdown to ...
[1 image] END_OF_DOCUMENT_TOKEN_TO_BE_REPLACED

In its relatively short lifetime, the former "Coventry Evening Telegraph" building has become a superb & iconic venue with a tremendous momentum over ...
[6 images] END_OF_DOCUMENT_TOKEN_TO_BE_REPLACED

Most readers of this piece will know of Joe Meek & his revolutionary production techniques, but fewer will be aware of his work with one of the top ...
[1 image] END_OF_DOCUMENT_TOKEN_TO_BE_REPLACED