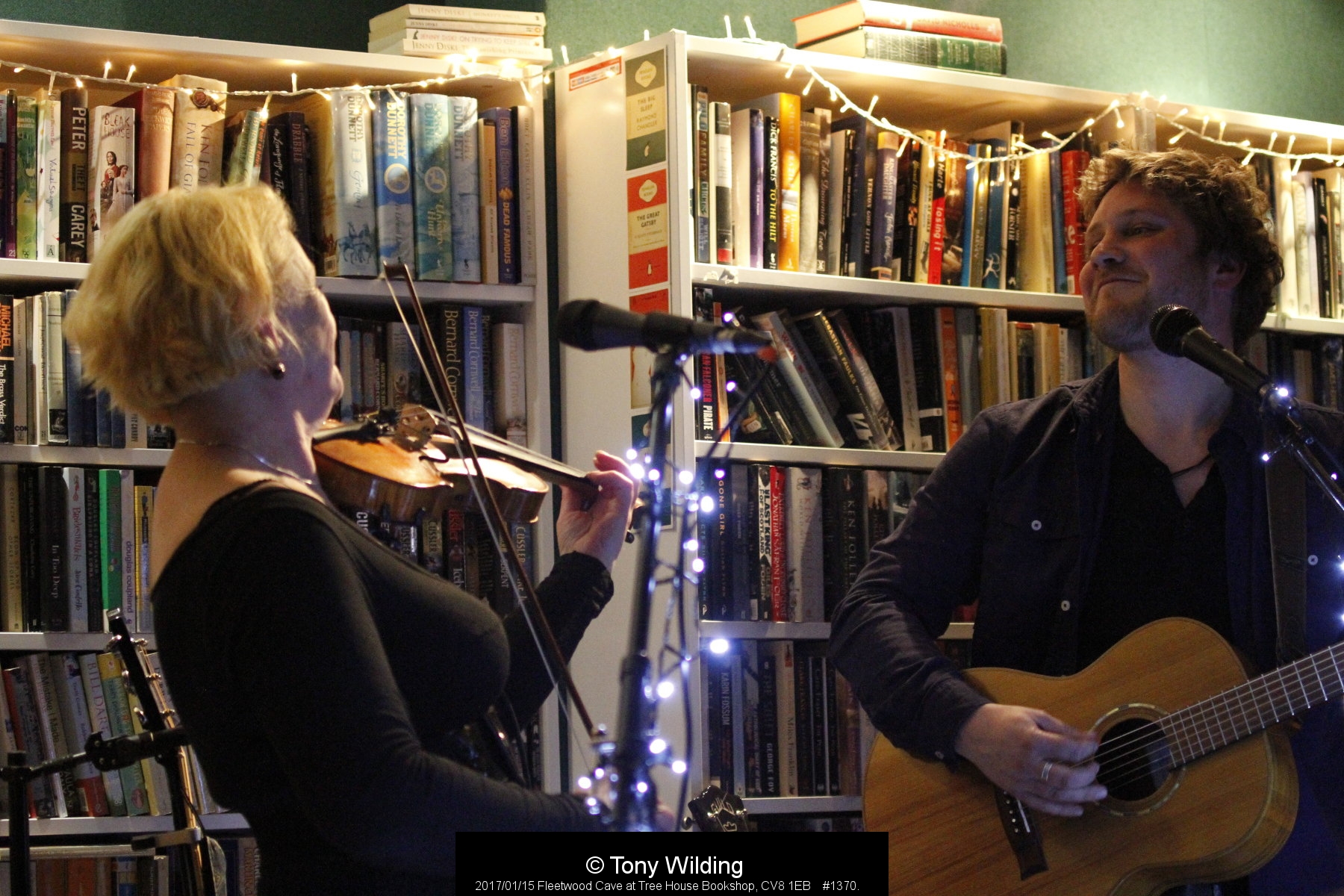 1 of 3
Twin passion indulged as The "People Like Us" spring tour thunders into The Tree House Bookshop with Fleetwood Cave (Marion & Gregg) flushed from recent high spirited performance in Banbury. Gracious host Victoria welcomes to duo full of warm repartee, sparkling wit, engaging smiles and more than one chorus song delivering all too brief an interlude from daily lives.As 'People Like Us' kicks off proceedings also listen intently to the craic between songs and be further rewarded as we dig for victory, spend time at a retreat, live the dream (daytime TV) and hear of inspiration behind the songs. "Guinea Golden" first of 2 songs composed in or about Clifford Chambers holds promise of prize, during interval find from the book-shelves...Extended set with inclusion of 2 numbers bound for the next TRADarr album, Marion and Gregg returning to melting pot which forged the making of Fleetwood Cave as duo when recording "Cautionary Tales". The first offering 'The Bonny Lass Of Anglesey' appears on Gregg's own solo album "Old England Grown New" song we return too later ; 'Please Be Patient' leads into scented farewell of 'Dancing Girls' before returning visit to fiddle of the late Dave Swarbrick (who featured on Gregg's recording of 'The Bonny Lass Of Anglesey') in fitting tribute 'Wizard Of The Worldly Game' and Marion's dashing bow on 'Lazurus'. Second revelation of new TRADarr material is the setting of the John Clare poem Winter winds, cold and bleak to music in 'Winter Winds', beautiful song which should not distract from the song writing talents assembled in front of us. Marion, whose solo album "Holding Space" also shares merchandising table at concerts, writing the traditional material with a contemporary slant coming from Gregg. Together equal duties of the 10 originals upon "People Like Us". 'Lay Me Down Gently' soaring vocal graced with brief moment of silence as the beauty sinks before rapturous applause, 'Jesus' still finds abode in a Northamptonshire town.'18th Day Of May' and re-visit to Clifford Chambers for unusual custom in 'Gypsy Queen' more opportunity for sing-along, the latter dividing room between girls and boys sadly carry things to journeys end. 'Passage Of Time' signals finale of an acoustic 'Hurry On Sundown'. Closing refrain of tour and album title song 'People Like Us' asks "Where Do We Go From Here?". In reply onward to Hinckley Act (17th February) as tour continues until end of April before Festival season gets underway. On tonights evidence both remaining tour and festival season promise great delight, Stratford Folk Festival early temptation.Everyone prize winners, try your luck at The Tree House Bookshop on Febraury 25th when duo Jacob & Drinkwater, Tobias ben Jacob and Lukas Drinkwater visit (The Burning Low EP and Live At Hope Hall excellent introduction). http://fleetwoodcave.com