A catch up with Paul McLoone of The Undertones 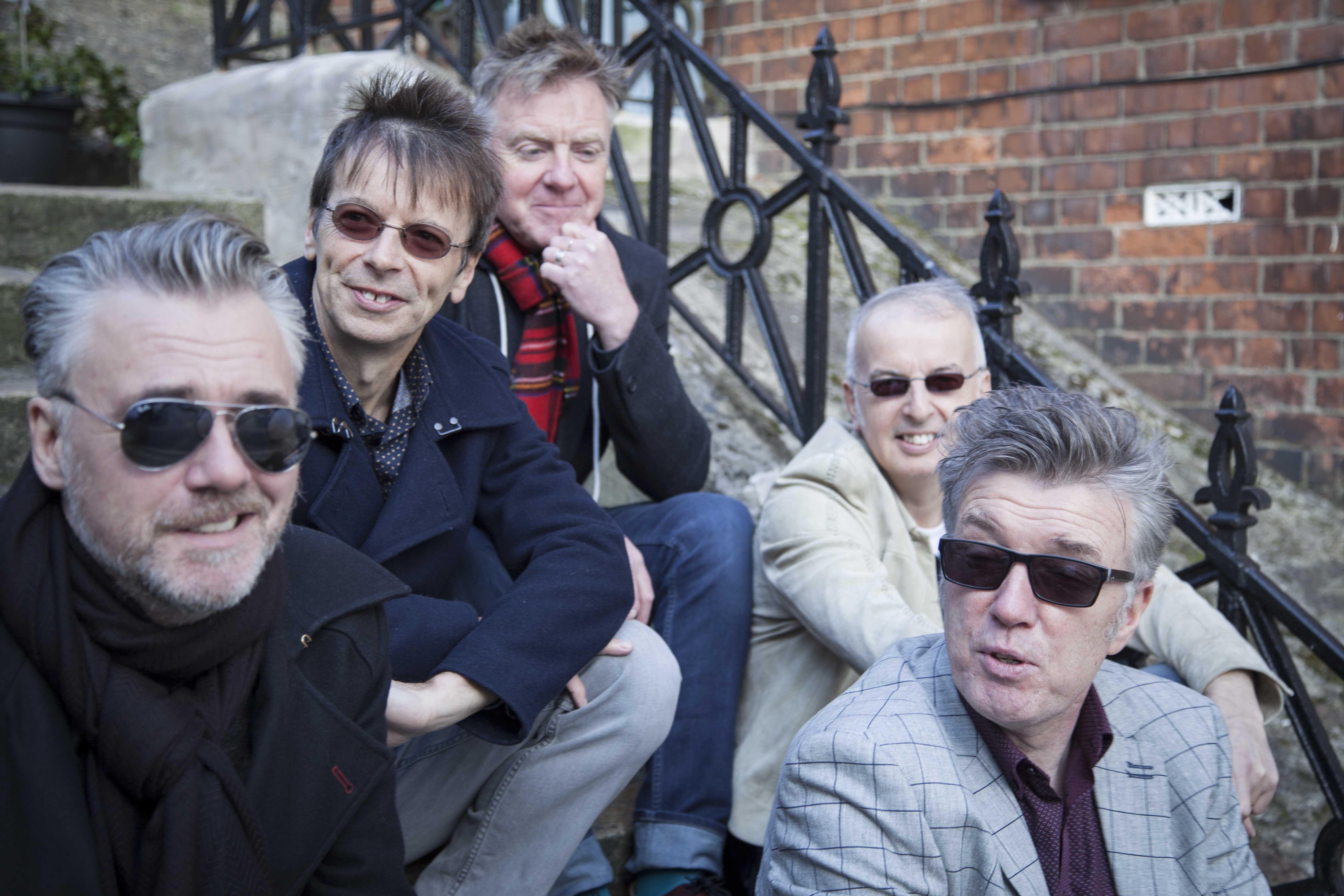 As reported earlier in this month, one of the world's favourite bands, The Undertones, are playing at the HMV Empire in Coventry on Saturday June 4th, supported by Hugh Cornwell who had hits with his band The Stranglers as they too were hitting the big time in the same era.

It was therefore a great pleasure today to catch up with lead singer Paul McLoone ahead of the gig. Part of the pleasure was listening to someone so articulate & enthusiastic for what he & the band was doing: we spoke for over an hour & I only wish I could share with you the full transcript but that would make an article of pretty daunting length.

My initial question was what is pretty standard for 2022: how have the band come through COVID19?

Paul's response set the tone for what followed: something of an outpouring of enthusiasm for getting back out playing which surely in itself reflects the frustrations of not being able to do so: and indeed his admission that there were times when they questioned "is this it? Are we done?". He feels that getting back out playing has "reignited" their love of what they do , made them even more appreciative of how lucky they are, how much they enjoy it  & focused their attention more on the band against the background of all the other things they are involved in.  They are also very aware of and grateful to the audiences coming to see them, especially given the background of the continuing aspects of the pandemic. He says he is conscious of having a smile on his face & that they must never take playing for granted. They are certainly looking forwards to playing the home of Two Tone: he feels that although very different in sound, what The Undertones do & what Two Tone did come from similar places: they have played recently with the Neville Staple Band and the audiences appreciated both bands.

I wanted to know specifically, how drummer Billy Doherty is now as he was taken ill during a recent short UK tour? The good news is that he's absolutely fine: over the heart scare which happened just before going on stage in Newcastle & resulted in a trip to hospital & back to full fitness. Paul reports that he's "100%... firing on all cylinders… loving being out there… really really glad to be playing"* He also paid tribute to Kevin Sharkey who deputised for Billy at short notice for the gigs immediately afterwards.

I couldn't get very far into a conversation with a Derry musician without asking about "Derry Girls" (in which the band's "Teenage Kicks" quite rightly makes an appearance, albeit a version Paul considers "heavy metal" and reminiscent of how the group might have played it before they recorded it). Paul finds watching it "..slightly surreal.. Derry is itself very much a character.." and beyond the great humour & poignancy he sees in it, feels it is important to allude to "..some of the tragic episodes which were unfolding in the North.." during the period in which the show is set and is particularly pleased how it covers the signing of the Good Friday Agreement with its high level of public support in the context of present day events which are unfolding so he finds it "..all very timely that we should reflect upon the Good Friday Agreement…"  Though he did wish more of the accents were actually from the city. If you look closely, you can apparently spot Paul's son in a scene outside the shop, but sadly no band members appear.

In fact "Teenage Kicks" has very much evolved a life of its own (it figures in many "greatest song" lists & was famously John Peel's own favourite) and in March 700 Derry school children recorded a version for the "Walled City Passion" Festival. Paul reports the "huge impression" it had on the band. We had a long chat about the "resonance of that song which just reverberates… so it can be reinterpreted forty five years later in such a radically different way.. it's transcended its origins.. you can't have a critical view of it any more. It just IS " a song which John O'Neill wrote in an afternoon, which wasn't their biggest hit, wasn't on the first album (originally) and nearly didn't make it onto their debut EP.

How did they come to have Hugh Cornwell as a support: his style is so different from theirs? Equally over the years the band have played with other bands such as Joy Division with much darker songs to their own. Paul is "looking forwards to seeing him again" and as a "..huge Joy Division fan has always been impressed that the band played with them". He feels the "punk/post-punk /New Wave, whatever you want to call it" is a "very broad church… very diverse… a lot from that era tends to be a lot darker than what we normally do.. our dark moments are kind of disguised .. they are there in the songs but you've got to dig a little deeper" and that fans of The Undertones & The Stranglers respected both bands and that likewise there was "a lot of affinity between the Two Tone kids (and Undertone fans).. it's not hard to work out the connection.. disaffection & a government which was completely ignorant of the concerns of that generation….. The punk fans appreciated The Undertones because they felt there was an authenticity: it's not affected…Having legends like that play with us is just a great honour. …Musically we're not the same at all but audience wise there's a big crossover".

Paul has been lead singer now for something like 23 years, far longer than his predecessor, yet it is Feargal Sharkey who so often is first thought of (for example the press went to him for a quote on the "Walled City Passion" event despite his not having written "Teenage Kicks" nor having not been an Undertone for forty years): is that a burden?

Paul was most gracious on this point, accepting that the hits which put the band into public consciousness & were commercially most successful were recorded with Feargal and of course acknowledging his distinctive voice which was a significant factor in their initial appeal. He is totally comfortable singing in his own style and is used to brushing off less informed comments: often from people unaware that the band reformed in 1999 with a new singer.

I personally think the two albums recorded with Paul (‘Get What You Need' and ‘Dig Yourself Deep') are superb & as great as those with Fergal (there is also a new compilation of the two out called ‘Dig What You Need') (indeed if you heard me interviewed by Doug Armstrong on his "Music From Big Pink" show on Welcombe Radio last month, you'll have heard me make this point & I selected "Here Comes The Rain" as one of my five songs  to prove this: a song Paul referred to as their "Jesus & Mary Chain song").  Paul was initially a little sceptical of the point of the compilation ("it was very much Damian's baby") but now is very pleased with it: Damian has "refreshed" the songs with subtle new mixes and the response has been excellent: there has been more press than with the original releases & sales have been good. The reviews too have been great & he's delighted that the songs are now getting appreciated.

We talked about plans for the band & Paul expressed a hope that they'd get new material out or maybe a live album, as they've never done that. They are looking forwards to playing Glastonbury 2022 for the first time in quite a number of years (though mysteriously on the Acoustic Stage: "I hope they're not expecting us to turn up with a couple of acoustic guitars & bongos because that won't be happening").

I must say that find the Paul McLoone Show's (which ran for 22 years on Today FM) Spotify playlist to be one of my favourites , so with that sort of oversight, I thought I'd pick his brain and ask if he's got any artists for our readers to listen out for? He enthused about the number of current great Irish artists emerging over the last five years particularly. He namechecked Fontaines DC, Just Mustard, MELTS, (he recommends their current ‘Maelstrom' album), Denise Chaila ("going to be a big thing very, very soon"), CMAT, For Those I Love ("so lyrical & poetic… quite remarkable") and Kojaque. What I especially appreciated was how Paul enthused about the current Irish music scene, with artists being unafraid to be themselves, not copy each other and being part of a collegiate wider community "without all having the same kind of haircut" unlike in his earlier days in the music business: a description uncannily like the one I keep on emphasising about the current Coventry & Warwickshire musical community: which suggests the tendency is thankfully widespread.

However in this respect, his longest response took the form of a tribute to the late Cathal Coughlan of Microdisney and Fatima Mansions fame who died very unexpectedly last week (Paul said that spookily he had been playing his music when he got the call) in which he waxed very enthusiastically about his recent work including as part of the duo Telefís (their album is ‘A hAon') and his recent solo ‘Song of Co-Aklan' ("simply tremendous") plus various work "which hasn't yet seen the light of day" including a collaboration with Jah Wobble. "A huge, huge loss… such a talent and a fierce uncompromising artist that we've lost… artists would do well to emulate him"

So there you have it: some of the many highlights of a long & fascinating conversation.

*Did you spot Paul's presumably subconscious Billy Doherty reference in that sentence?

The Undertones (John O'Neill, Damian O'Neill, Billy Doherty, Michael Bradley and Paul McLoone) are playing at the HMV Empire in Coventry (supported by Hugh Cornwell) on Saturday June 4th. Tickets can be purchased from here:  https://www.eventim.co.uk/event/the-undertones-hmv-empire-14930110/

‘Dig What You Need' is available from all the usual sources.

As those of you who were kind enough to read my interview with Paul McLoone last week (and what an interesting one that was for me to enact) will ...
[5 images] END_OF_DOCUMENT_TOKEN_TO_BE_REPLACED