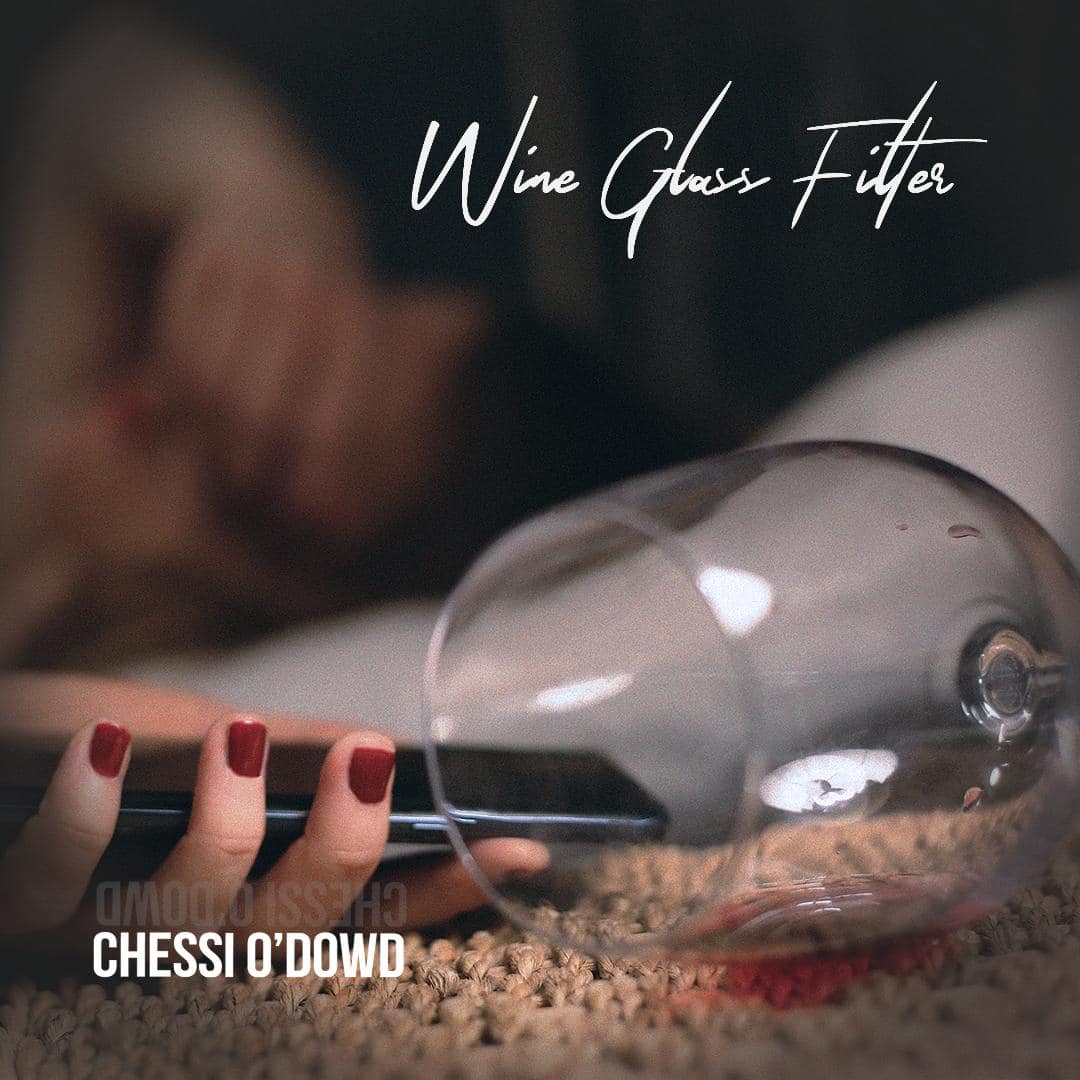 Way back in March 2020 I had just enjoyed the launch of the latest Izzie Derry EP and was looking forwards to the one for the Chessi O'Dowd ‘Wine Glass Filter' EP. It never happened & goes down in my personal history as the very first commitment to be crossed out due to lockdown. Which is a pity as I was very much enthused as to the prospect of the evening and the music. Meanwhile, over in Australia, Chessi was with family, anticipating the same event & preparing for it when the metaphorical axe fell. It must have been worse for her.....

So here we are more than two years later: though ready to roll out so long ago, ‘Wine Glass Filter' has never appeared, to my chagrin & that of others.

But now at last our wait is over, though not necessarily as we had imagined it. Chessi is releasing a full album of that name on Friday May 27th , but it is emphatically not the EP as originally prepared nor even that record augmented by additional tracks.

You might well understand why an artist, thwarted in their original intentions, might take either option. However Chessi makes it very clear that she is not only a perfectionist when it comes to her music but someone also whose values are vitally important to her: which explains many of her lyrics but also why we are getting the record we are getting.

Thus additional songs have indeed been added to the March 2020 conception (and these are ones she feels better encapsulate the Chessi of 2022 compared with the 2020 version) but just as importantly, the album is more collaborative & sonically richer than ‘Wine Glass Filter #1' would have been.

The first version was a simpler affair, recorded "almost live". Now, instead we have the far from inconsiderable input of both Dan Sealey & Jack Blackman added to the mixture: both performing & Dan on the production & mixing side too.

By all accounts, the initial collaborations were tricky, carried out as they were in separate studios while physical proximity was not possible but Chessi being Chessi, she persevered in pursuit of the best possible setting for her songs & I understand latter parts of the process involved them being able to come together in the studio.

Of the eleven tracks now on ‘Wine Glass Filter', some such as "Forget It All", "Snowflake" and "The Pines" will be familiar to listeners from previous releases: though not necessarily in the versions on the album.  In addition, you'll hear "Stuck", "Falls To Me", "New Beginnings", "The Road", "Blue & Yellow", "Shoe Laces", "Midnight Caller" and "Counting Down".

"Snowflake" of course provides the album with its title and was in many respects the epitome of the tragedy of March 2020. Released as a single from the EP once it was clear that the parent record was on hold, it sent the clearest possible signals not only of her talent but where she stood. Whether she meant it as a signature tune, it immediately gained that status & proclaimed her qualities to the world, attracting plenty of radio play & critical acclaim.  What you lucky people get on the album is a version with a fuller arrangement: less stark & raw than the original but with none of its power nor integrity diminished. In fact, having heard the single version for over two years (you can also hear it on ‘Hot Music Live Presents Volume Three'), this new one is a bonus treat for Chessi's fans, complementing what they already know so well & offering a slightly different angle. Equally 2019 single as "Forget It All" re-appears in another slightly lusher guise: though again it's about textures & nuances rather than major reworkings. It's great to revisit an already fine artefact but no need to remove its essential qualities. To me the version of last September's "The Pines" sounds to be the same recording, though whether it's been slightly remixed or that's just my imagination, I'll leave to other ears. At any rate, I stand by my previous review of that fine song.

The other eight songs are crackers & while I still regret the events of March 2020, you can easily hold the opinion that they allowed some of them to exist & that overall is a blessing.

The three musicians involved have the highest standards & this shows in what you get. I've frequently in these pages raised the issue that more & more people are favouring EPs over full albums for reasons discussed elsewhere in the magazine, but one beneficial effect has definitely been to completely eradicate the concept of the dangers of "filler" tracks. That in turn has rather raised the bar on the matter & it's interesting how the relatively few albums I've written about lately have been filler-free: most recently this one. Not only have the performances & production been sweated over, but the writing & selections of tracks to use: a pretty rubbish couple of years musically for Chessi maybe, considering the feedback she was getting for "Snowflake" but it was time she has spent well in preparing this set & on consideration, it's hard not to say the wait is worth it for what she has offered us. (Not least "Blue & Yellow" which although written a few years ago about a friend, has in recent months gained extra resonance for unconnected reasons).

Of course it's not been a whole void between "Snowflake" and "The Pines": last May saw the very popular cover of "Pensacola" (originally by Joan Osbourne) by Chessi & Jack which appears not just to have kept her name & artistry in the public domain but opened her up to the possibilities of adding the voices & instruments of others to her music in ways which enhance the songs without removing from the essential Chessiness of ownership.

And that more or less is what ‘Wine Glass Filter' is: less a full band album but a sort of "Chessi Plus" affair: her songs, her voice, her thoughts, but realised to a slightly deeper degree as new elements add emphasis & varying dynamics.

The dominant voice is beyond doubt: as is her lead instrumental playing. Dan's respectful & deeply restrained production sees to that. If you hear anyone but her on a song, they are aiding it, not taking it over.

It's important that you hear what she is saying as the album is pretty polemic in an accessible & non-preachy way. The light & popular approach to melody may initially deceive you & indeed Chessi loves metaphors & allusions to make her point, but make her point she does. Whether it's gender identity & rights, defending liberalism, ecology, calling governments to account, war, relationships or abusive behaviour or indeed any of the things she deplores, she is ready to call them out. Sometimes reproachful, sometimes "more sad than angry" and sometimes more angry than anything, Chessi also avoids the trap of seeming self righteous by various expressions of self deprecation, humour (and I never trust a record without that) and a few tracks which tackle the smaller issues of life: including several regrets over the passage of time & opportunities missed.

The richer palette of instruments (including keyboards, electric guitar, drums & I'm pretty sure I heard a banjo in there at one point) means that although melodically different (and Chessi also subtly varies her singing style too), yet more diversity is generated as the tracks sound so different from each other.

This is not the first album I've said this about recently, (check out ‘All of the Fallen Stars' by Kenzie Webley) but one aspect of removing filler means that every track has the immediacy of a potential single. I wonder which one she'll choose next? Something like the apocalyptic "Counting Down" would reflect the side of Chessi we might expect from "Snowflake" while "Shoelaces" is a more intimate tale.

Seen from our perspective, ‘Wine Glass Filter' seems to offer a little something to a wide range of people (though probably not bigots nor the narrow minded). More importantly, from her internal one, it allows Chessi to articulate multiple thoughts, aspects of her personality & emotions in effective & discrete ways.

Her name & talent has been known among the cognoscenti for three or four years now. The COVID19 hiatus, the relative paucity of her released music so far & the fact that she's not been as active on the live circuit as some of her contemporaries account for that relative restriction. With ‘Wine Glass Filter' though, at long last she can pick up the "Snowflake" momentum again, build upon it & attract the size of audience proportionate to her artistry.

The last twenty or so months have to some extent made us all consider various aspects of time I think: such as how long has elapsed since we last did ...
[1 image] END_OF_DOCUMENT_TOKEN_TO_BE_REPLACED

Two apologies to you all.
[1 image] END_OF_DOCUMENT_TOKEN_TO_BE_REPLACED