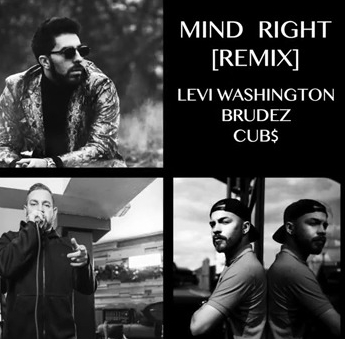 It was grand indeed to catch up with Levi Washington live on Sunday on the Bandstand, but it's back to the weekly business as usual now with his latest recording release, a remix of "Mind Right", whose original version we reviewed back in January.

This time though, it's more than just a case of tweaking the knobs into different positions on the board, as Levi has welcomed Brudez (no stranger to "Hot Music Live" readers) and Cub$ onboard to offer additional rap contributions to the song in question.

Each certainly adds new thoughts to whatever Levi had in mind originally (and you'll see from my review of the first version that I wasn't entirely sure myself). I still wonder how much mental health musing is involved at some level, though the new lyrics seem to take the song further & further from my first thoughts. I suppose by this time I ought to hold my hands up and admit I called it wrong.

I've long been a fan of Brudez who brings to the table not only technical skills, but a warm & humane approach to rapping. In a genre where aggression & putting people down has unfortunately been a notable thread, he has always been an uplifting alternative vision of what can be said.

Cub$ is new to me & his more strident rapping complements both the tune & Brudez's laid back style, creating a good tension & moments when although apparently on the verge of getting in each other's way, they generously back off and let the other have their say.

Behind it all, Levi continues as before: I'm not sure quite what he's done to the instrumental aspects (if anything) though it sounds like he's toughened it up slightly to fence with the rapping. Otherwise it is still that strange & provocative collision of psychedelic stylings, with retro & contemporary approaches.

This is precisely the sort of thing that I imagine a lot of Levi fans (at least those who see him indoors) might have expected. However he's not gone down the road of pandering to anyone's expectations in this series of weekly issues: he seems much more interested not only in exploring his own wide range of musical interests but demonstrating them to members of his public who may only have experienced some of his many facets to date.

It's back to business nearer usual for Levi Washington with the release of "Same Ole U".
[1 image] END_OF_DOCUMENT_TOKEN_TO_BE_REPLACED

I was pleased to hear that Levi Washington is managing both his health issues & his rapidly expanding portfolio of commitments running live events ...
[1 image] END_OF_DOCUMENT_TOKEN_TO_BE_REPLACED

I'm sure many readers will have been saddened to hear of the illness of Levi Washington last week and his consequent hospitalisation.
[1 image] END_OF_DOCUMENT_TOKEN_TO_BE_REPLACED

You can't fault Levi Washington for ambition: trying to release a new single every week against the background of organising so much live music ...
[1 image] END_OF_DOCUMENT_TOKEN_TO_BE_REPLACED

After the angst of last week when he agonised over the mix of "Carrie, Baby" until Wednesday & the existential angst of the preceding "Check 1, 2" ...
[1 image] END_OF_DOCUMENT_TOKEN_TO_BE_REPLACED