"Everywhere I Turn I See The Devil" by Levi Washington 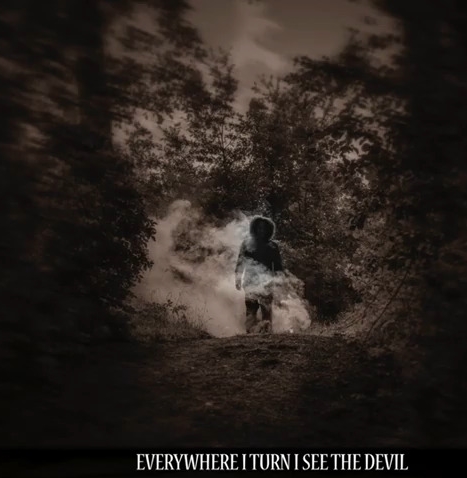 I was pleased to hear that Levi Washington is managing both his health issues & his rapidly expanding portfolio of commitments running live events and even has been able to offer us another single this week, albeit on the Thursday: not that it matters which day: personally I'm just glad that he is functioning on that level at all.

However it's not just a release for the sake of it (though apparently a planned collaboration, had it been completed this week might have nudged past it in the schedule), as "Everywhere I Turn I See The Devil" is without doubt already another big personal favourite of mine within this current campaign of weekly singles.

One of his more sparse arrangements, his own likening of it to the work of Johnny Cash makes much sense: not just in the bleak & sombre sound (and that peculiar feeling of dignity which is there in so many of his songs), but also in the biblical imagery of the words & the implied self criticism: the Man in Black was frequently in this mood of advising his audiences not to do as he had done. Though I would imagine that Levi has led a much more virtuous life than Johnny did from time to time. Nonetheless, how can you write a song of this nature convincingly unless you've peeped into the abyss & taken notice of what you've seen within it?

He described it so me as "spooky" and it does indeed have a sinister vibe to it, though I personally don't find it tending towards the supernatural: in fact instead of conjuring up some sort of mysterious agent of darkness, it evokes an all too real demon which lurks within each of us & can shape our actions for the worse. He wasn't too sure apparently when to share it with us, but quite apart from the fact that Hallowe'en is surely far too long to wait for such an excellent song, I think the subject matter is with us all year round, not just one night. Who could not doubt that the Devil currently walks the earth today as we see the horrific footage?

Levi tells me he "didn't try to over-think" this one, and I feel that by perhaps letting instinct prevail, it's that much better given the type of song it is. It's yet another of Levi's songs which evidence his range & like so many of his songs, it's in a style he has mastered & could realistically build a whole career out of if he simply limited himself to it.

I commend it unto you unreservedly.

It's back to business nearer usual for Levi Washington with the release of "Same Ole U".
[1 image] END_OF_DOCUMENT_TOKEN_TO_BE_REPLACED

It was grand indeed to catch up with Levi Washington live on Sunday on the Bandstand, but it's back to the weekly business as usual now with his ...
[1 image] END_OF_DOCUMENT_TOKEN_TO_BE_REPLACED

I'm sure many readers will have been saddened to hear of the illness of Levi Washington last week and his consequent hospitalisation.
[1 image] END_OF_DOCUMENT_TOKEN_TO_BE_REPLACED

You can't fault Levi Washington for ambition: trying to release a new single every week against the background of organising so much live music ...
[1 image] END_OF_DOCUMENT_TOKEN_TO_BE_REPLACED

After the angst of last week when he agonised over the mix of "Carrie, Baby" until Wednesday & the existential angst of the preceding "Check 1, 2" ...
[1 image] END_OF_DOCUMENT_TOKEN_TO_BE_REPLACED