The Mintakaa Collective live at the Daimler Powerhouse


The Mintakaa Collective live at the Daimler Powerhouse 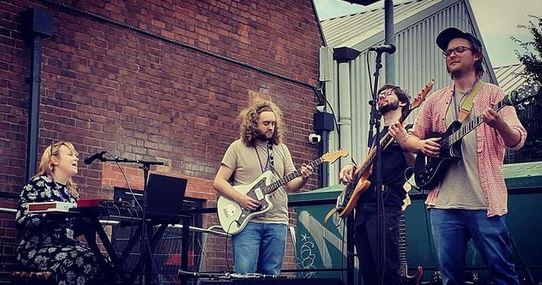 If you enjoyed "Auriga" by Mintakaa on ‘Hot Music Live Presents Volume Six' then it's a fair assumption that you'd be interested in catching Luke Weaver playing live. Thankfully therefore I can report that he has established a loose ensemble called the Mintakaa Collective to do just that and I was fortunate enough to catch them at the opening of the Daimler Powerhouse this afternoon, so it could be seen as a double debut of sorts. Good luck to the venue by the way: I was impressed not just by what they had done with the premises but by what I saw inside of their activities and resources and especially by the friendliness and helpfulness of the team there who did a good job of organising a space which was a real challenge to manage in terms of large numbers under current circumstances.

On this occasion, Luke (who played guitar and manipulated various other sounds from his laptop) was joined by fellow "Hot Music Live Presents" artist Sophie Hadlum on vocals, keyboards and clarinet as well as Andrew Hudson on bass plus Joe Beesley on guitar and keyboards.

Given the nature of the gig, the set was relatively short, consisting of three (admittedly pretty long) songs:  "Rushing", "Aotearoa" and "Auriga".

They had been preceded by a short solo set by Sophie which I sadly arrived a little too late to catch and one by duo  Kimberley & Credo whom I'd never previously heard of, but I enjoyed their soulful set: just two voices, one guitar and a mixture of originals and covers of songs I didn't know.

I suppose if pressed beforehand, I'd have imagined that I'd best enjoy Mintakaa in "..the right venue, with the right audience and the right time of night, which is to say quite late...(it) has a nocturnal vibe to it" as I put it in an earlier review and not in sunshine on a stage between Coventry Canal and a service yard as in fact I experienced it. In fact, though I may have been correct up to a point, the music still worked really well in this environment. The event (at least the interior part) was quite stressful to me given the crowds and I felt the tension drop away during the music, so it certainly worked its magic on me. In fact I was standing near yet another HMLP artist, Ian Todd at one point & he made exactly the same observation to me: a sort of jazz on a summer's afternoon effect.

Which leads me back towards what the music sounds like in this context especially. "Neo jazz" and "neo soul" I shared last time (mainly because Luke had self described those ways) and now I see he's going for "NeoPsychJazz". I ran the question past another member of the Collective who quoted these elements and added an extra "acid" to the equation. Frankly I see all the above fitting to some extent, though Mintakaa continue to elude precise definition and long may that remain so. It's tempting, with a Shanghai Hostage involved to draw comparisons with that band in terms of difficulty of pinning either down: and I've said as much about Ian Todd too. All of them don't so much defy categorisation as seem to have no interest at all in being pigeonholed: much to their credit.

The test today was I suppose the audience. Most bands debut in front of those who already know them & are predisposed to liking the music. Today, the Mintakaa Collective played to a very ad hoc selection of all demographics, the vast majority of whom I imagine knew nothing of them previously & who probably would not have attended a billed Mintakaa Collective gig as such, yet the response seemed very positive from across the very diverse board. There was a great deal of virtuosity on the stage, yet no showboating: while Luke clearly led each number musically, the contributions of each of the others brought special life & new nuances to them. Given the complexity of each piece, it is greatly to the band's credit also that they made them accessible to all our ears too.

If you like the sound of all that, I gather they are repeating the show tomorrow (Sunday) at the same venue & then on Friday they are first on the Resonate Stage (at 1800) at the Godiva Festival. See you there I hope.