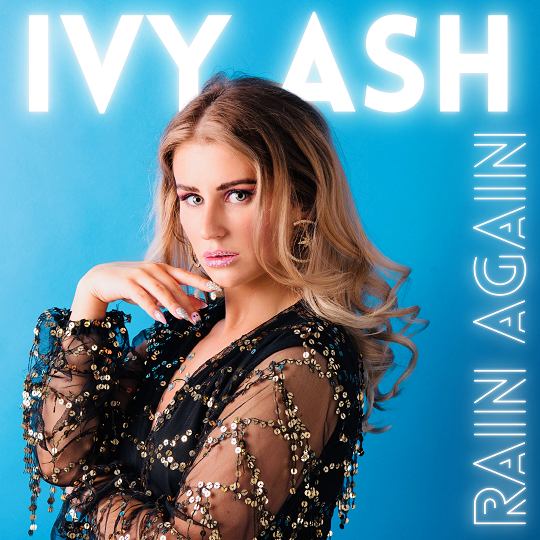 And so here we are at the third single from the irrepressible Ivy Ash, namely "Rain Again" (which is released on 2nd July) though really it's the second song we've heard so far in her career, since her debut "Oops" was followed by its acoustic twin (which also appears on ‘Hot Music Live Presents Volume Six') as her second single.

Please don't worry though: it absolutely proves that Ivy is neither a one hit wonder nor a one trick pony (although those of you who have followed her in her previous incarnation will know she has a significant body of work which is now slightly off stage).

"Rain Again" is far from an "Oops" part two, though it shares its infectious dance beat approach and effervescent lead performance. Instead it acts as something of a bridge between Ivy's earlier work under her name of Bethany Dyson and this new venture, touching upon the profundities of her previous lyrics while melding them successfully with a more pop sensibility. So though the tale Ivy tells has a bit more depth than with "Oops" (it's "…all about breaking bad habits and finding yourself, (focusing) on reflection and self- empowerment.."), you are free to explore it on whichever level you feel most comfortable with: and maybe delve deeper into the message after taking a break from dancing to it.

Although Ivy has cited Kylie Minogue, Lady Gaga & Gwen Stefani as her primary influences, I can't help but noticing the parallels with Madonna on "Rain Again" and I like the way she shares with her the feat of balancing a processed vocal sound with the retention of the warmth & individuality of her original voice. Equally the sure footedness of the whole piece is another characteristic they share.

There is a most impressive confidence in Ivy's work: a great start to her career and no wonder her name is spreading across the music media as we speak with increasing radio plays on more & more platforms, both in this country and beyond and both Arts Council England and Help Musicians UK have been sufficiently taken with her work and ambitions to offer her grants.

The future is looking bright (and given her carefully honed image, glittering) for Ivy without yet even having played a gig in this guise: no doubt that will further ignite her trajectory.

Look out too for the accompanying video to "Rain Again" which drops on July 16th.

With her latest single "You, Not Me" (which doesn't actually come out until August 5th but please be ready for it because it's so good), ...
[1 image] END_OF_DOCUMENT_TOKEN_TO_BE_REPLACED

I was delighted last month to describe to the debut single by Ivy Ash (the new sparkling pop persona of Bethany Dyson) called "Oops".
[1 image] END_OF_DOCUMENT_TOKEN_TO_BE_REPLACED

Back in November, I introduced you to Ivy Ash, the sensational new pop persona of Bethany Dyson.
[1 image] END_OF_DOCUMENT_TOKEN_TO_BE_REPLACED

It's been a few months since I reviewed "Open Your Eyes" by Bethany Dyson in the magazine  the follow-up to "Just You & Me" which also features ...
[3 images] END_OF_DOCUMENT_TOKEN_TO_BE_REPLACED