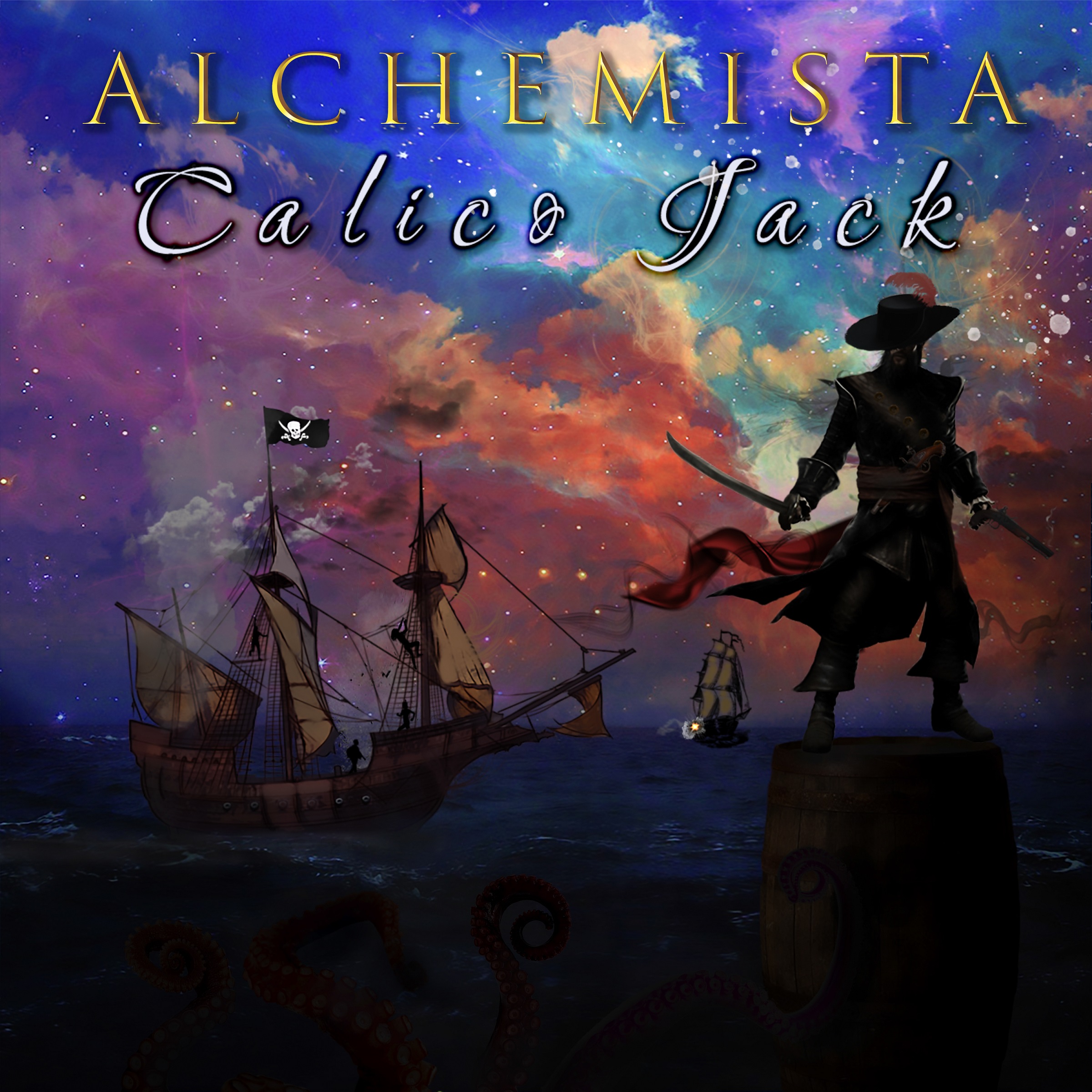 For their first single release of 2021, Alchemista are offering us a tale of piracy on the high seas in the form of "Calico Jack". While lockdown necessarily ensured that their previous (and indeed festive) single "Ghosts of Christmas" was  by a stripped down version of the band, in this case, we hear the not inconsiderable fruits of a lot of learning by the band who have now acquired the skills to put together a full band performance from remote locations and so they all appear on this track: Caroline White on vocals, the writer of the song, Paul Jayes on keyboards, Peter Garelick on the guitars, Colin Halliwell on drums and sound engineer Aaron Clews of Daybreak Studios (who knitted the various pieces together with Colin & Caroline producing), playing bass guitar.

The song has its genesis back from before lockdown, so they had rehearsed it extensively, which must have helped with recording, but although always pirate themed, it did not gain its title until comparatively recently: a "tribute" to "Calico Jack" (John Rackham) who plied his trade in the Caribbean in the early 18th century & who seems to have designed the Jolly Roger. Thankfully they settled on his story rather than that of a better known buccaneer & this adds yet more freshness to this swashbuckling tune.

The band have been kind enough to share with me parts of their journey on learning how to put the track together & frankly that has been fascinating: not only does it give me special insights into the song to inform this piece, but it has been equally interesting to match their perceptions of "Calico Jack" with what I heard myself before I learned of their own thoughts.

For the band, they built from the keyboard as a starting point & this they (rightly) see as an innovation in how they work which changes the fundamental dynamic of their trademark sound. I'm sure they are correct in perceiving that the general sound is different to previous songs I've heard from them (I'm sure they see this variation as a positive contribution to what they can do) but I honestly would never have described it as a keyboard driven song, so well are the other elements melded in with it: indeed the guitars & drums are very key parts in what you hear.

Alchemista clearly disdain the mundane as a rule and significant numbers of their songs demonstrate this by entering into the world of the supernatural (as our previous reviews have made plain). Quite apart from the change in recording technique, the switch in their other-worldly adventuring from the fantastical to time & place travel has also impacted on what you get to hear. The band described it to me as a transition from the "gothic" to something more akin to "folk rock": I can't quibble with the former as a description of earlier work, but I feel the folksiness of "Calico Jack" is more relative to their other songs than an absolute description: this is not particularly akin to Fairport Convention nor the Byrds. If anything, parts of the song soar like quite hard rock. Any folk element is most noticeable in the melody and perhaps even more so in Caroline's vocals which delivers a considerable amount of emotional clout within a delicacy of approach.

The lyrics are pretty much the lament of a sailor a long way from where he wants to be, but whereas a traditional folk approach to such a subject would be melancholic and downbeat, "Calico Jack", as I said in the preceding paragraph, soars like the albatross high above and roars like a sou'west gale. This show of defiance reminds us that a lachrymose sailor his words may make him out to be, but this one is also a buccaneer who eventually was executed for his crimes.

There is power & pathos in "Calico Jack" and rather than glorifying his deeds, it offers us a look at the man behind the pirate. For Alchemista, it is a considerable achievement: it is greatly to their credit that they were able to make it at all: the skills gained may come in for future use.  Yet beyond this, it is a roistering & potent single which betrays absolutely no sign (to my ears) of being assembled piecemeal: the parts gel to excellent effect & create a single they can justly be proud of.

You can also catch up with  "Calico Jack" in this video:  https://www.youtube.com/watch?v=0ZnwZYUMRxE

It was last April that Alchemista were last able to put together all their considerable talents and release the rip roaring pirate themed single ...
[1 image] END_OF_DOCUMENT_TOKEN_TO_BE_REPLACED

Relatively hot on the heels of October's ‘Clear Skies To See' EP (certainly rapid by the standards of what is possible in 2020) ...
[1 image] END_OF_DOCUMENT_TOKEN_TO_BE_REPLACED

I really hope that like me, you enjoyed the popular track "A Place To Hide" on ‘Hot Music Live Presents Volume Four'? If you haven't ...
[1 image] END_OF_DOCUMENT_TOKEN_TO_BE_REPLACED