'The Righteous Jazz' by The Mechanicals Band 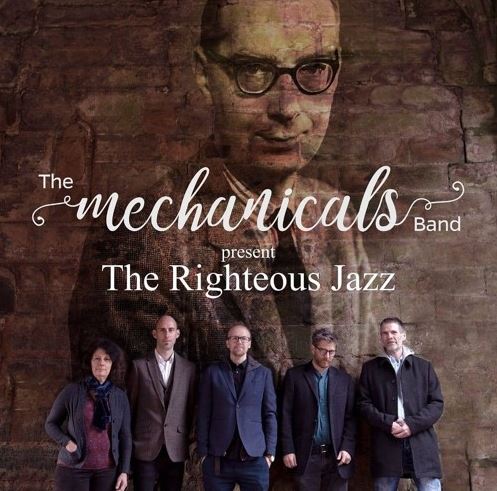 We cover some excellent artists in the magazine who produce some great material. One extra special profile of an artist (to me) is one who works or collaborates across artforms, and another is a sort of restless one, who is ceaselessly seeking to develop ideas & who keeps a reviewer on their toes.

A really good example of both would be The Mechanicals Band. Inasmuch as you can pin down what they do, they set poems to new music (though that is far from all they do) and their music links hands intimately with not only poetry & drama too.

Their 2017 debut ‘Exit, Pursued by Bear‘ (when they were Rude Mechanicals) had a strong, yet not exclusive focus on Shakespeare & ideally was appreciated in performances they gave with the collaboration of actors. Then came 2019's ‘Miscellany #1' EP which set more recent poems by a range of writers.

However for the past few years, their main focus has been ‘The Righteous Jazz' project: a wholly Philip Larkin orientated one which went public in 2019 in a short form at Coventry's Shoot Festival & after Arts Council Funding was secured, a longer theatrical performance was given at both the Tin Arts in Coventry & Hull Truck Theatre, with the dramatic aspects directed by Connor Alexander & performed by Lisa Franklin & Steve Brown. Hopefully you read our review of the evening at the Tin from November 2019.

You might reasonably suppose then that their release of  ‘The Righteous Jazz' album will serve to capture the musical aspects of the show. This however, being the Mechanicals, is only part of the answer as no fewer than three of the eight songs have been created since those performances & hence we'll need to look forwards to hearing them live during the delayed tour of the project.

Although Wes is the principle setter of existing lyrics to new tunes, as with earlier work, Jools has composed two tracks "Mr Bleaney" and "High Windows" & these raise the intriguing question of "can you capture the work of a writer without actually using their or any other words?". It's not as paradoxical as it might sound, for though "High Windows" is indeed an instrumental , though named for Larkin's poem, the band eschew actually setting the words as they have with all their previous word & just let Jools' stately & dignified tune evoke the absent lyrics. A bold move but hardly the first of their career.

"Mr Bleaney" is a little more conventional in that Wes does recite the poem of that name over Jools' ragtime tinged composition: but again this breaks new ground in that hitherto, the poems have tended to be sung rather than delivered in this manner.

"This Be The Verse" is probably the one text in the project whose use was unavoidable (I believe Wes & the band  selected all the poems to use themselves) given that this is the one poem by Larkin everyone knows (if they know of his work at all) & whose opening is presumably his most quoted lines. The band however do not tiptoe around this cultural icon with deference but approach it, as with everything else, with confidence & love and manage to bring fresh life to the meaning of the words.

On the other hand, "Long Lion Days" is one of the least known of the poet's work: composed in late July 1982 and unpublished during his lifetime, Wes  discovered it, rescued it from obscurity & now it is among the most loved not only of the band's live repertoire but also in Wes' solo sets (when these are possible): an excellent example of the deep power of the project & one which lends Larkin a service by revealing another side to his personality, often ignored. Were there to be a single released from this album, I should have thought that this was the outstanding candidate. Personally, having heard it live so many times, having a recorded version at last is delightful.

"Horns of the Morning" is I think the song I've heard second most often in concert to date (I assume it thus to be one of the earlier ones to be created) and is another tune inspired by the earlier jazz forms in terms of the arrangement, yet the vocal melody swings back towards a more folk tone, appropriate maybe given that this is another of the poet's more pastoral & optimistic pieces.

Of the newer songs, it's not too surprising that given the idea of setting the poems of a man who was jazz critic of the Times for a decade that the band should plump for one of his more overtly musically themed ones (from  1954): hence "For Sidney Bechet". The tune tips its hat to the New Orleans sound alluded to in the lyrics rather than the older stylings of "Horns of the Morning" in a most compelling and authentic manner. It's good to hear horns on this song, though ironically not the saxophone associated with the subject of the poem…. It's the groovy cut on the album.

"Days" shares a title with the famous Kinks song and some of that track's reflective tone: a timeless meditation on our lives & the human condition: it particularly resonates with the relentless passage of days during the pandemic & conceivably that is why this poem has been selected. The sound is much more classic Mechanicals with prominent violin & viola, echoing the sound of the first two albums.

"Trees", which closes the latest collection is rightly placed there & I think a very good decision: another of Larkin's best known works, this equation of seasonal changes to those of life & death is a profound one & the band rise to the challenge of a tune & performance to match it. Elegiac & melancholic at turns, this should, in my opinion, be a significant live addition to their repertoire & I look forward to hearing them perform this & the other tracks at the earliest opportunity.

As with all their earlier work, there is boldness in what the Mechanicals present us with: yes the tunes are highly melodic & burrow into our heads easily, but the apparent ease with which they perform the songs should not blind us from the challenges before them initially, to capture the essence of a complex individual, often using very well known texts & say something new about them.

One of the final formal gigs I shall attend in 2019 was also one of the best: the highest possible levels of musicianship but even more importantly ...
[2 images] END_OF_DOCUMENT_TOKEN_TO_BE_REPLACED

Occasionally I've been able to review for "Hot Music Live" an event which involves but is not limited to music: a particular pleasure.
[7 images] END_OF_DOCUMENT_TOKEN_TO_BE_REPLACED

Well here I am again, this time reviewing not one but two artists on whom I fear I may have already used up my supply of appropriate superlatives in ...
[3 images] END_OF_DOCUMENT_TOKEN_TO_BE_REPLACED

Congratulations: you are about to get a double review.
[6 images] END_OF_DOCUMENT_TOKEN_TO_BE_REPLACED

It's great to preview the 2019 SHOOT Festival which offers "a platform for Coventry & Warwickshire's emerging artists to shoot from".
[1 image] END_OF_DOCUMENT_TOKEN_TO_BE_REPLACED