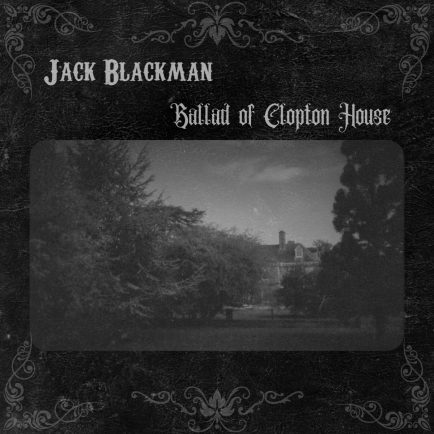 At the end of a month which began with the release of his excellent single "Hard Place to be Be", Jack Blackman is showing no sense whatsoever of resting on the laurels of the fine critical & popular reception of his recent songs by offering us his Hallowe'en single "Ballad of Clopton House" as unlike "Hard Place to Be", "Empty Beretta" or "Self Isolation Song" as you could imagine, demonstrating both his range of interests & his capacity to express them eloquently.

Based on stories which may be legend, or truth or something incorporating elements of both, it is based around the eponymous Stratford House and three sisters (also apparently called Clopton) who lived there & died locally. Each met a sad or even tragic fate, verging on the macabre, so the idea fits the season well, but so well does Jack tell their tales that I think rather than spoil the song for you, I'll leave you to listen to his telling.

As well as being good for All Souls' Night,  "Ballad of Clopton House" fits well with Jack's other work, whether the similarly Warwickshire based  "Ballad of Charles Walton" (dealing with the infamous 1945 Meon Hill "witchcraft" murder) or his tracks about the more gothic aspects of the blues country in America.

Much of the playing is by Jack himself, including multiple eerie guitar parts but remote contributions were made by players such as Jon Doran, Louis Scheuer, James Maguire, and David Vaughan while Joe Collier pieced it together from a safe distance.

The layered effects add up to something haunting for sure (it's fun picking out details such as the various guitar: one slide sounds like a George Harrison impression, intertwining voices, what sounds like an accordion and percussion emulating bones hitting each other) but although the lyrics emphasise the macabre well (at times with gleeful relish), there is also a sense of melancholy & sympathy for the lost girls. Touches such as key changes, tempo shifts & drop out help ratchet the tension up & turn the screw on our emotional responses.

Quite rightly there is already a fair bit of press coverage of this release and look out too for the video shot on the Welcombe Hills, near the house & a well which plays a significant part in the story & may have inspired a well known scene in a play by local playwright & lyricist William Shakespeare. You can watch it here: https://www.facebook.com/jackblackmansongs/videos/350708779355533

Personally, despite (or because of?) the narrative, I loved it & think you will too: evocative & effective, it has sufficiently light a touch to scare us enough for our delight but not to rob us of our sleep.

Here's a slightly rhetorical question: what is better than a new release by one of the most respected & popular Coventry & Warwickshire artists? ...
[2 images] END_OF_DOCUMENT_TOKEN_TO_BE_REPLACED

After his most impressive prolific run of form since the music scene was turned upon its head, from "Self Isolation Song" (which is also on ‘Hot ...
[1 image] END_OF_DOCUMENT_TOKEN_TO_BE_REPLACED

Jack Blackman is not only on a rich run of form at the moment (the pandemic seems to be inspiring him to express his feelings through the medium of ...
[1 image] END_OF_DOCUMENT_TOKEN_TO_BE_REPLACED

We were greatly pleased to be able to feature the zeitgeist tapping "Self Isolation Song" by Jack Blackman on ‘Hot Music Live Presents Volume ...
[1 image] END_OF_DOCUMENT_TOKEN_TO_BE_REPLACED