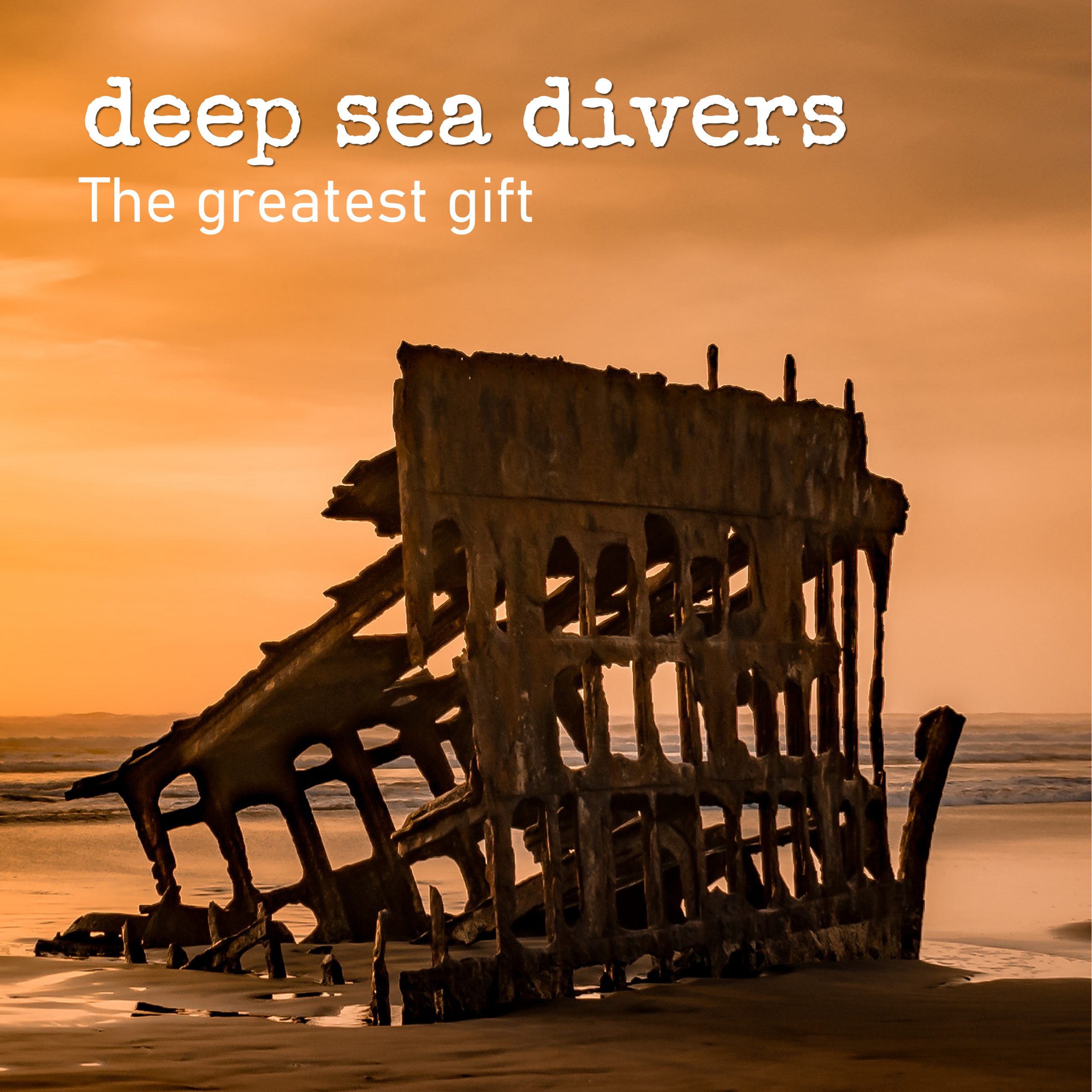 So, another day in lock down, another day I can't be writing about the great gig I went to last night.... thank goodness there are some really interesting records coming out (and allowing me to write reviews of artists I'd not necessarily heard before nor had they featured in the magazine) and look out for some featured artist articles too.

Today I'm pleased to introduce you (if you've not met before) to the Rugby based Deep Sea Divers and their album ‘The Greatest Gift' (dedicated to the late Mark Ernest, the original drummer for the band).

Formed originally in the early 1990s, the band is now effectively a project of writer/singer/multi-instrumentalist Dinesh Fernando  (he plays guitars, keyboards, bass and  synths on the record and produced it too) and he is accompanied on various tracks by Sophie White (viola & violins), Colin Allen & Astrid Tid Jones: both play drums (though not on the same tracks), Irenie White (backing vocals), Ian Hill (saxophone) and Jo Jo Barnes sings on the final track "And When You Go (Reprise)", a song about her split with the bassplayer of Powderblue, the band she & Dinesh were in until the personal split precipitated a band one.

The original incarnation (who were once likened to Smashing Pumpkins, of whom they had not in fact even heard of at that point) played prestigious venues like the Rock Garden & the Mean Fiddler & attracted record company interest, adding a horn section even but eventually went into a dormant state until Dinesh decided to come back to his songs with them.

The songs themselves are generally about relationships, whether Dinesh's own, those he has witnessed or those he has imagined: exploring the spectrum of emotions associated with them. A really clever touch is opening the album with a breezy instrumental version of that last track, signalling an optimism which is then completely flipped on its head by the Janus face "desolate abandonment" of the song with lyrics closing the collection.

The style is a bit elusive (and that is far more of a compliment than a criticism): rooted probably in folk (Dinesh started playing original songs in folk clubs thirty years ago and remains "grateful for how open minded and lovely folk audiences are") with high jangle factor moments, a very jazz orientated track "Little Things" (sax enhanced & the sort of heartbreaky jazz rather than the sultry sort, though occasionally it does threaten to fool you in that direction) and others even less easy to define.

The songs themselves are subtle yet also deceptively simple: uplifting melodies make one's heart soar until you realise how poignant the words you are listening to are. The production & arrangements are tastefully and apparently simple in sound too, avoiding overpowering numbers of instruments at any one time, thus putting the emphasis definitely on the songs & allowing the various lead instrumental parts such as the strings, the sax & lead guitars to ring with clarity & celebrate the musicianship.

It's tempting listening to these (or any songs at the moment) to imagine they were written about our current state of affairs (see also my recent reviews of Hannah Woof & Chessi O'Dowd) but of course they weren't, though a good song may well have applicability in various contexts & appeal to different listeners in different ways. Here "We Stand Alone" (a finger-picked piece, featuring, appropriately Dinesh alone) does to some extent also speak to our times as well as its original target.  The following "Let It Heal" too seems to be speaking of what lies ahead, although taken out of the context I'm listening to it in & restoring it to its proper one, it is as you might imagine about recovery from sorrow & moving on.  As for "Chaos" don't let me go too far down this road.... Actually this is one of my favourite tracks on the album: again just Dinesh & his guitar & probably the most prominently mixed vocal on the album, this perfectly weighted & paced song hits home hard in a slightly Elvis Costello way (not that it sounds particularly like him.

In fact Dinesh suggests that influences on the collection include Neil Young (solo and as part of Crosby, Stills, Nash & Young), John Martyn, Nick Drake, Joni Mitchell, Van Morrison, The Byrds, The Sundays, Cocteau Twins & Jeff Buckley: not a bad collection to be inspired by, though greatly to his credit not a song on the album is a direct pastiche of any of them.

"One Life" (co-written with the album's dedicatee) is perhaps the set's most "rock" track, combining interestingly jangly guitar & skittering funky drums (by Astrid) behind some really great lyrics.

The last track I'd like to single out (and the ones I haven't focused on are all great too: I'll leave them for you to explore yourselves: I don't want to spoil it by giving too many of the secrets away) is the instrumental "Luna", which was, for me, despite the excellence of the lyrics on all the other songs, the most affecting: played on an acoustic guitar it actually sounds like a minuet on a harpsichord...

Chalk up another on my list of "must catch live when I'm able"....