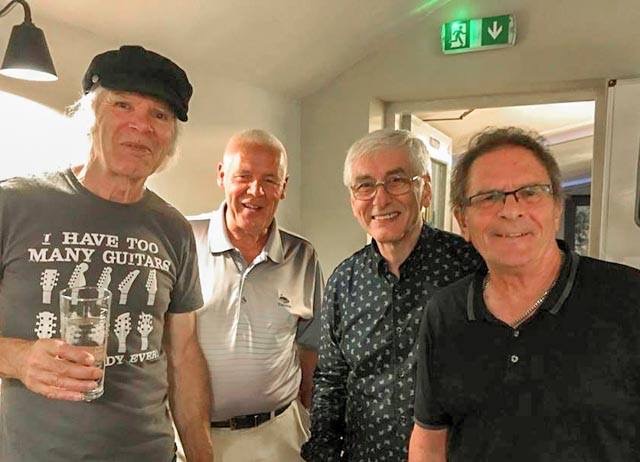 Question : When did you begin writing ?
Answer : At 16y ears I began writing lyrics to songs then music . First song called "At the weekend" which I sent to a company advertising for songs to submit to artists to play. But when hearing the cover of this I withdrew it not liking the version .

Question : Had you played in any other band?
Answer : Yes , briefly in a Leamington band called Brother John

Question : Did you continue to write?
Answer : Later in life yes plus started going to open mics around 2012. While on Jury service I met Noel Willis and he introduced me to the Guitar group who were at The Red House, then New Inn and now reside at The Oak House , Holly Walk Leamington Spa , Monday nights run by Bert West. I also went to The Coventry singer/Songwriters group at Christ the king hall a monthly get together introduced to this by Graham Weston. John Harrington runs this group who each submit a topic to be voted on, the winning topic they have to write a song about , changing every month. I found this hard to keep doing due to heavy work commitments and family.

Question : How did you get to being in Just-Us and DABB4 ?
Answer : At the guitar group one Monday as I was singing The Hollies song " Sorry Susanne " someone started harmonising with me and it was guitarist Alan Kitchen and from there we started practising and going to open mics. We went as Just-Us

Question : When did you become DABB4?
Answer: Alan and I decided 2017 to advertise for a bass player and drummer and Bob Brannan and Bob Sage joined us. We then started rehearsing at The band Factory in Leamington and going to open mics. We were at a Matty Coles Open mic and met Gemma Leahy Waddell and from then rehearsed at 14 Records run by Gemma and Matthew Waddell.

Question : Have you recorded any songs?
Answer : Yes, Bob our drummer had on his bucket list the wish to record a cd , so with 5 of Dave's songs and musical help from Alan we made a cd at 14 records called One off the Bucket List. A year ago I sent one of these songs called " Missing" to Paul Sanders who established the chart show on Coventry HillzFM 98.6 radio station There are 50 artists in this chart you can vote for weekly and Missing went in at number 6. DABB4 currently have the fifth song "Call Me" at number one in this chart and their Christmas Day song was number one over Christmas and New Year

Question: Where was your first gig with DABB4
Answer: The Oak House, Holly Walk Leamington 2018.

They're currently rehearsing more 60's covers plus a couple more of the many tracks Dave's written . There known for the harmonies they do so well and at ages 69 to 73 they're thoroughly enjoying being retired

What a weekend of live music put together by Peter Drew (with a little help from his friends) and all put on to to raise money for Guide Dogs For The ...
[9 images] END_OF_DOCUMENT_TOKEN_TO_BE_REPLACED