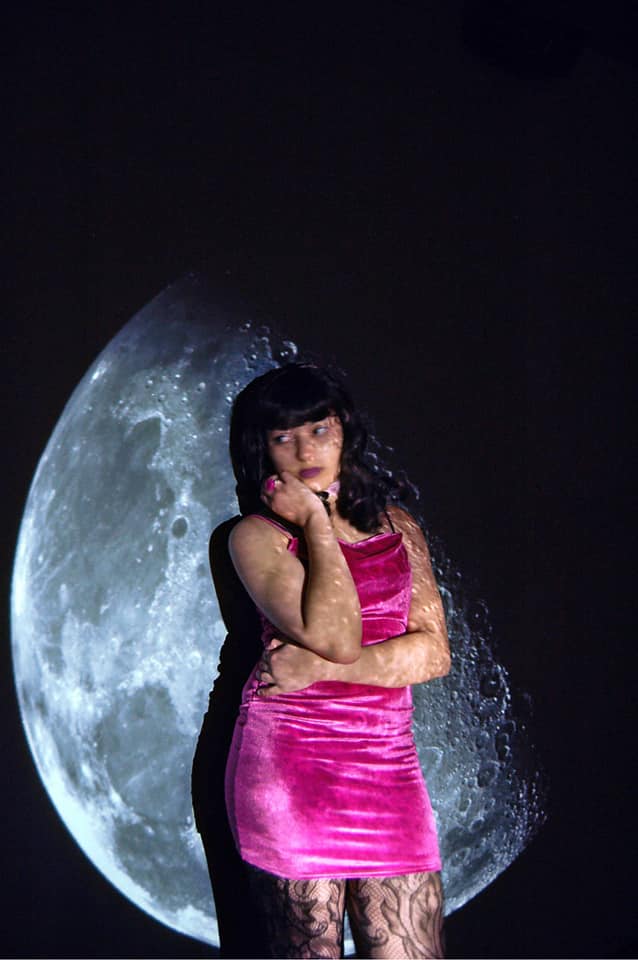 Rosa is a musician who has taken a really exciting path using technology. Her music forms part of a wider performing arts experience these days. Thanks for doing this Rosa Francesca.

1. Tell us about your early influences and what lead you to want to create music

I come from a very musical family, so as a kid I was always surrounded by instruments and my parents encouraged me to pursue a career in music. I got into folk and alternative music as a teenager and started listening to people like Joanna Newsom and Sufjan Stevens, and fell in love with the maximalism and density of their arrangements and became obsessed with learning obscure instruments. This influenced my style greatly and led me to work on more intricate lyrics with complex themes.

2. Your current work and use of technology is really exciting and fascinating. You appear to have moved your music in new directions. Tell us more about this.

I recently teamed up with digital artist Edie Jo Murray, who works with mixed reality, digital collages and most notably CGI 3D art. We formed an art collective called Geminae, looking at cyberfeminism, biofeedback and neurodiversity, as we are both neurodivergent. We received a grant to purchase a brain sensing headband that picks up EEG data, and created a performance piece called Luna Affect which premiered at the Black Hole Club for Lumen's show Stellar in April and May. It consisted of me wearing the headband and controlling electronic music and video playback of NASA footage of the phases of the moon, and I'm so proud of how it turned out. In order to carry it out I had to learn visual programming in a very short space of time, and I quickly realised that I love the world of digial art and music and wanted to explore it more, so I started looking into some of the techniques I had learned on my degree involving the program Max MSP and started composing electronic music and sound art pieces.

I used to perform as a singer-songwriter, playing guitar, piano and harp and singing, but had become increasingly bored of this genre since graduating, and furthermore found it difficult to break into the Leamington music scene once I moved back into town (whereas in Lancaster I had been fairly successful and had several gigs per week, playing exciting venues such as Blackpool Tower). I stopped performing in January of this year after deciding it wasn't for me anymore, but am glad that I have found digital performance art as a new way to put my stuff out there!

3. You are going to train in music therapy. What particular projects and elements interest you most in this field?

I've always been interested in Music Therapy as my dad taught at a specialist school for the disabled and I loved performing at their music events there. At university I took a few modules in Psychology of Music and Arts, Health & Wellbeing (which is a field a bit more general and less clinical than Music Therapy). After graduating I wasn't sure if I still wanted to become a Music Therapist, so I started volunteering with a local dementia singing group and attended an experiential course at the Birmingham Centre for Arts Therapies where I learned more about the career and training process, and realised that I was still in love with the world of Music Therapy and definitely wanted to get involved. What I find magical about this form of therapy is that even people with very limited communication can still have profound reactions to music and it can really give them a new lease of life- at the dementia group, nonverbal members were often still able to sing, it's really amazing. I've applied for a Masters and am currently waiting to hear if I'll be able to train, but if I don't get on I still plan to volunteer as an Arts in Health practitioner because it is a very rewarding job.

4. What are your thoughts and feelings about the music scene locally?

I have mixed feelings about the Leamington music scene. On the one hand, I think the quality of music is very high and it means you're never disappointed at an open mic. However, this does mean it becomes a bit elitist. In Lancaster the open mics were open to people of all abilities, and you'd often get people who'd turned to music late in life and were just doing something simple on the ukelele or a silly song, but you don't get that so much here. I'm also disappointed in the fact that it's a very male-dominated scene here, and often of one particular genre of acoustic guitar folk-influenced music. I'd love to go to an open mic where there wasn't a line-up entirely of white-guys-with-guitars, but I think that's half the reason I'm not in that scene anymore anyway. I think the availability of music technology means that it's a lot more diverse scene and more people feel able to get into it.

5. If you could collaborate with any artist ever, who would it be and why?

I would love to work with the violinist Owen Pallett. He does incredible string arrangements for people like Kimbra, Arcade Fire, and The Last Shadow Puppets. I saw him live a few years back and he did some very innovative stuff with loop pedals and synths, and I like that blend of acoustic instruments and electronic music.

6. Where can people see / hear your work.

I also have a new album called Bidomain coming out on Friday 29th July which will be available at https://rosafrancesca.bandcamp.com/.

7. Leave us with three top songs you love and we should listen to.