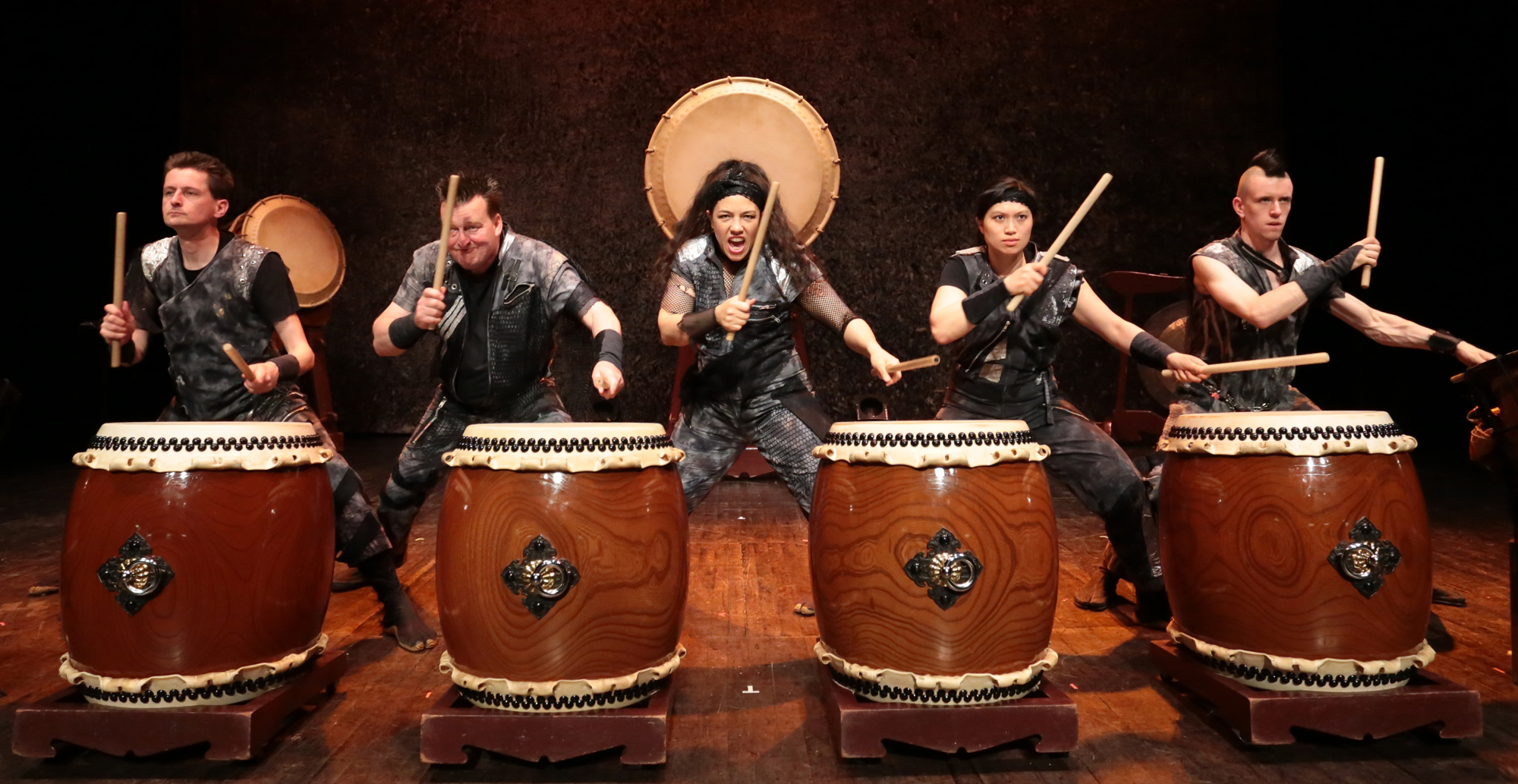 Many thanks to Heather Kincaid of the Belgrade for the heads up that Europe's premier touring Taiko ensemble will be bringing their explosive live show with thundering rhythms, masked choreography and post-apocalyptic martial imagery is to Coventry for one night only on Thursday 10 May.

First established in 1994, the Mugenkyo drummers are the UK's longest established Taiko ensemble, boasting an international reputation as leading performers in the genre, as well as pioneering performances here in Britain.

Based in South Lanarkshire, the group offers a wide range of workshops, performances and training programmes at their purpose-built Mugen Taiko Dojo, converted from an old farmhouse. Yet their reach extends far beyond their Scottish headquarters, as they bring their work into the heart of communities throughout the country.

Literally meaning "limitless reverberation", the name "Mugenkyo" expresses the company's belief that Taiko should be without limitations, either musically or geographically. Extensive touring has seen them blaze a trail for Taiko drumming throughout Europe, acting as ambassadors for this distinctive art form across the continent.

Thunderous vibrations from the huge Odaiko drum are offset by the delicate sound of bamboo flutes and soulful vocals in layered, percussive soundscapes. Meanwhile, diverse costumes ranging from edgy industrial outfits to gorgeous, earthy silks are combined with innovative dance moves to make for a sumptuous visual feast.

Jointly emphasising accessibility and excellence, Mugenkyo aims to respect and preserve the ancient traditions of Taiko, while also developing it as a contemporary European performing art, relevant to the time and place in which we live now.

Previous concerts have seen them play prestigious venues, including the London Queen Elizabeth Hall, Gateshead Sage, Nottingham Royal Concert Hall and Brighton Theatre Royal among others. They have also developed commissions for large-scale multimedia events, released a range of CDs and DVDs, and featured in TV broadcasts of major events such as the Brit Awards and BBC Last Night of the Proms.

Mugenkyo Taiko Drummers perform live at the Belgrade Theatre, Coventry for one night only on Thursday 10 May. Tickets are available to book now by calling the box office on 024 7655 3055, or by visiting www.belgrade.co.uk where prices are even cheaper.

With 2019 marking his 85th birthday, singing star Vince Hill will be heading home to Coventry next month to perform a special farewell concert at the ...
[1 image] END_OF_DOCUMENT_TOKEN_TO_BE_REPLACED

I am indebted to Heather Kincaid of the Belgrade Theatre for her heads-up on the news that local singer Letitia George (who previously appeared on ...
[1 image] END_OF_DOCUMENT_TOKEN_TO_BE_REPLACED