"Talk on the Radio" by Keith Fabrique & the Missing Links


"Talk on the Radio" by Keith Fabrique & the Missing Links 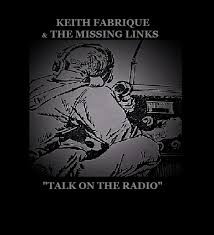 Keith Fabrique is a name familiar to very many local music lovers: not least because with the many roles he plays in our music, he has so many opportunities to engage with us.  So many tune in each week to hear him on HillzFM, whether for his acclaimed Wednesday Rock Show, regular stints hosting "Good Morning Hillfields" or other shows, listened to far beyond the city limits of Hillfields itself as what touches that community, touches us all.

On the other hand, there is also Keith Fabrique producer, based at Coventry's Tinkle Studio: and don't forget Keith Fabrique, Glasslips Records supremo. If you have ever heard artists as vital & popular as Danny Ansell or Huffy, Keith's the man helping put their material on record.

Now however, we have Keith's own album, or more accurately "Talk on the Radio" (wonder what the reference there might be?) by ‘Keith Fabrique & the Missing Links'.

The album is really eclectic.  Part of this is due of course to the varied input which gives most tracks a pretty individual aural fingerprint (though to be honest all these great contributions only serve the songs: there is no grandstanding here). The other part must surely lie in the range of Keith's musical tastes & inclinations. Keith has been in a number of bands & has been performing in a variety of permutations of musicians: I think the songs in this collection have been written over a period of some time too... The one thing they probably do have in common, apart from Keith's general "less is more" restrained & tasteful approach, is a very "adult" lyrical theme: these are grown up emotions being described & ones which come with experience alone.

Album opener "In Out Song, Voyeur" (which pops up incidentally on the new "Alternative Sounds, Volume 2" in the guise of "Inside Looking Out": in fact it's interesting to note that at least seven of the artists on "Talk on the Radio" have already appeared on the "Alternative Sounds"  series) grooves itself insidiously into your head, with a surefooted swinging feel, with beautifully interweaving vocals, guitar lines & sax (plus lascivious indrawn breaths). You can easily tell why "Alternative Sounds" requested use of it..

At the opposite end of the scale & album, "Slum Kid Blues" has a beauty too & the same confidence, but is bleaker in tone with starker instrumentation (you can probably gather from the title that the story it tells is somewhat different too) which suits the tale being told here....

The "Ballad of Black Ice" as the name suggests, haunts the album with a darker narrative (fans of Keith's work will recognise this as a variation on a song he previously cut with the GunShock Big Band as "Blackice". I like both versions, but this stripped down & quieter one, with almost whispered vocals is certainly a much more macabre take, which justifies the re-arrangement in my book)

"Five Fifteen: Ode to Bowie" is delivered a la Dame both vocally & in arrangement (think early 1970s): a pretty ambitious song I suppose, but they certainly pull it off very nicely with a succinct & incisive Ronsonesque guitar solo. I think you'll like it....

In a collection often characterised by quietness & space, perhaps the most extreme example is "Oh Yeah, I'm Walking". Goodness knows how can I describe this one: it's another sort of rock song but delivered at ballad speed & volume, yet most of the instrumentation, especially the exquisite sax by Liz Maxted could be defined as the dubwise style, floating ethereally in and out of the mix...

"Sweet Talking Blues" is a curious one too, underpinned by a sort of "Walk on the Wild Side" bassline, more spacey acoustic guitar, unexpected chords, a mixture of male & female harmonies.

There are four more songs on the album but I'm not going to go into them in depth, not because I don't like them (I do), but because I see my job as a reviewer is the encourage readers to go & listen themselves, which I doubt they will if I spoil all the surprises: so go on. You know it makes sense.