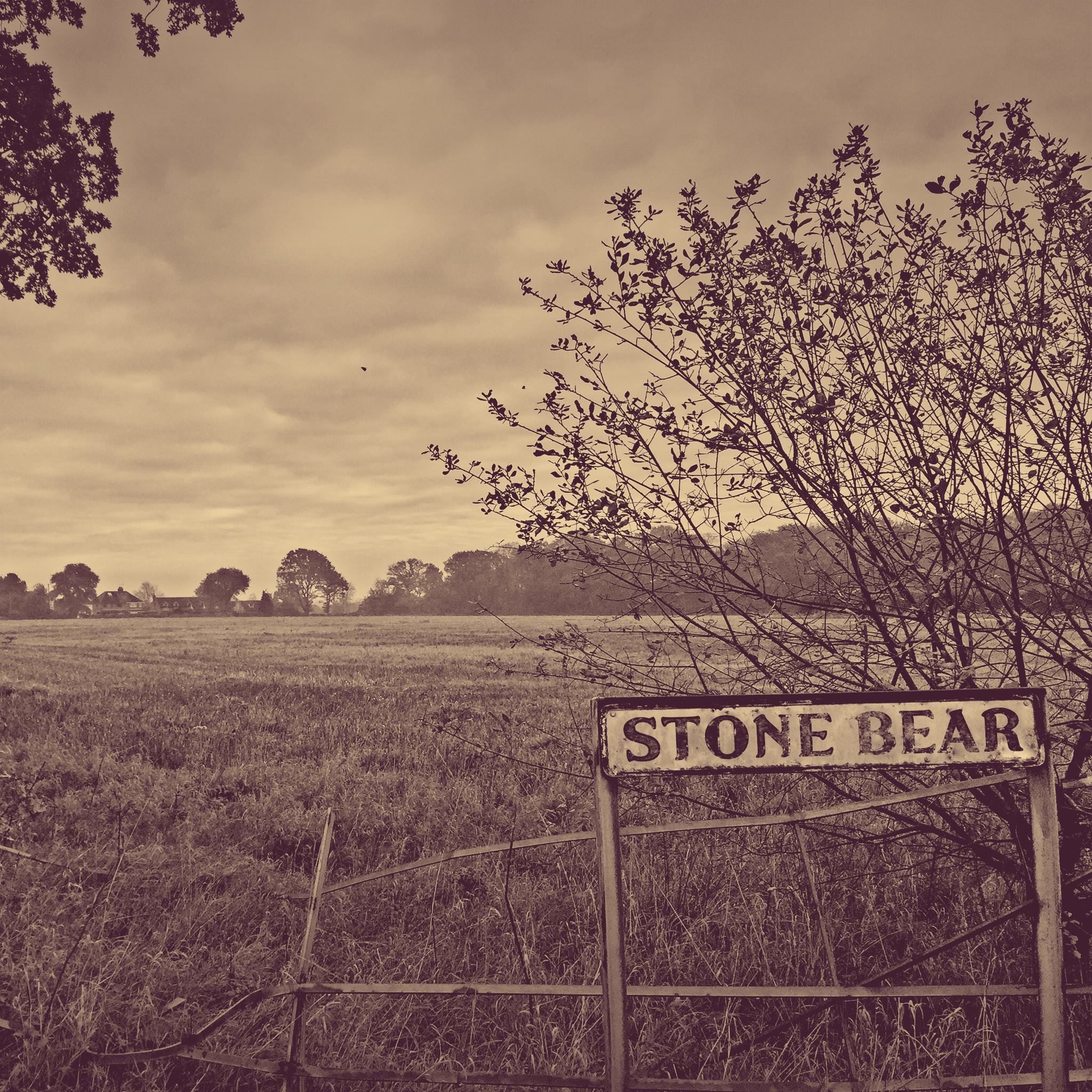 Readers may well (I hope) remember   from an earlier review, my enthusiasm for the live act of Stone Bear. I don't half get energised by new music especially when it appears out of nowhere onto my radar & takes me by surprise. I was tipped off to the act by former Style Council & Selecter bassist Anthony Harty who had been recording with them & singing their praises. When I first went to see them, after a number of excellent cover versions (this was a pub gig), a number unknown to me really hit me with its originality, power & energy of performance. When I asked at the break about it, they told me it was an original, but were not planning to play many more that evening. I'd like to think that my reaction played some part in the fact that the second set was virtually all blistering originals which set the house ablaze.

It is that set which has now emerged from the studio as their newly released (today to be precise) debut album "Stone Bear". This band don't muck about: the music is direct to the heart like a rapier, so there are no needs for frills nor deception: a simple title & the sleeve (pictured below:  design by Matteo Cuellar Vega, & photography by Jeff of the band) simply says "Stone Bear". What more do you need to know?

The core band is David John on guitar, harmonica & vocals with Jeff Dennis on drums and vocals, augmented on record by Anthony's bass.  "Stone Bear" was recorded at Gospel Oak Studios, produced by the band themselves with engineer Barry Bayliss & Mike Exeter (who has engineered Black Sabbath) helping with the mix.

The home of this music is the blues, but definitely the blues from a pre-world war two starting point: organic and reeking of the southern states in feel & authenticity. You can hear in David's songs echoes of Howlin' Wolf & Son House but without the intervening filters of so many interpretations. You may spot hints of Hendrix etc, but as much as anything the band are going back to the same well Jimi drank from. "Red Morning" and "Wine On the Table" for example sound like they were written & being played somewhere down in the Delta.

So what of these songs? Well there are fifteen of them & all very fine indeed. The process of live refinement and getting the studio sessions right have paid off in presenting the already well crafted songs. "Down in the Rain" is arguably my personal favourite live & very neatly exemplifies one of my reasons for appreciating the album so much. So often I have heard cracking live songs only to later hear recorded versions where the production has muted the qualities the audiences liked. Not so here. The band have apparently decided to reproduce their live impact & to me that is greatly to their credit. There are no compromises, nor punches pulled. David's voice has a world-weary bluesy huskiness throughout which some producers may well have tried to process, but which frankly would weaken this sort of material & sell it short. It reminds me rather of Paul McCartney deliberately stretching his voice on "Oh, Darling"... though these songs are considerably heavier in tone.

They describe themselves as a "rockin' two piece", which while accurate, fails to tell the whole story as they groove as well as rock (and indeed they strut too: check out "Walkin'") and "Rock Me" has a fine funk edge: one of the tracks where the addition of Anthony's bass has a profound effect.

Another highlight which those listening to the record will latch onto is "Where Do We Go From Now" which you can also check it out on this video before you buy the album: https://www.facebook.com/stonebearmusic/videos/918281424988383/

Much of the album has the power I have alluded to, but it would be unfair to paint them as purely electric & loud: as with the previously mentioned "Red Morning" & "Wine On the Table, the delicate "Broken Stones" is acoustic and shows off their melodic side as does "Wish Him Well" and these dynamic variations not only show off their range but also enable you to listen the album in one go more easily: such is the intensity of this music, were it not for the switches between electric & acoustic, the medicine might be too strong to swallow in one for some...

A few more specific track references for you then: " That Train" is a classic of the railroad blues genre: a spiky nod to ‘Smokestack Lightnin'' and another which struts its stuff compellingly.

"River" is another one I particularly liked: possibly the most original sounding cut on the album with a rock feel, yet impossible to compare with any other song I can think of (though that might be my limitations as a critic, but I prefer to think of it as a credit to Stone Bear). Excellent

"Rollin' Down the Smoke" ploughs a yearning groove with perhaps the most interesting vocal performance on the album with David's shifting dynamics.

"Stoney Road" features another powerful vocal and is perhaps the closest ‘Stone Bear' comes to the classic rock style.

But enough of me: go and buy the album & make your own judgement. I think you'll like it & I think you'll like catching them live too. They have made an enormous impression on me almost instantaneously & since hearing about them from such an eminent source as Anthony, I have heard more praise from other very experienced local musicians who do not give out such  lightly.

They can go far: they ought to go far. I hope they do.

It seems almost unreal and a bit transgressive to find myself writing a live review after so many months of reviewing the recorded activities of ...
[3 images] END_OF_DOCUMENT_TOKEN_TO_BE_REPLACED

A moment of pleasure, the more appreciated because it was unexpected, hit me last evening with the news that Stone Bear have released a new album, ...
[1 image] END_OF_DOCUMENT_TOKEN_TO_BE_REPLACED

It is always really great to have new talent introduced to you & it is a clear & highly  admirable feature of much of the music scene locally that ...
[4 images] END_OF_DOCUMENT_TOKEN_TO_BE_REPLACED

We are lucky to have more than our fair share of excellent blues practitioners locally: not only do they all possess an obvious love of the form as ...
[1 image] END_OF_DOCUMENT_TOKEN_TO_BE_REPLACED

Some of you may have noticed a gig on at The Squirrel in Coventry on Saturday 21st October entitled "Anthony Harty featuring Sam McNulty and ...
[1 image] END_OF_DOCUMENT_TOKEN_TO_BE_REPLACED