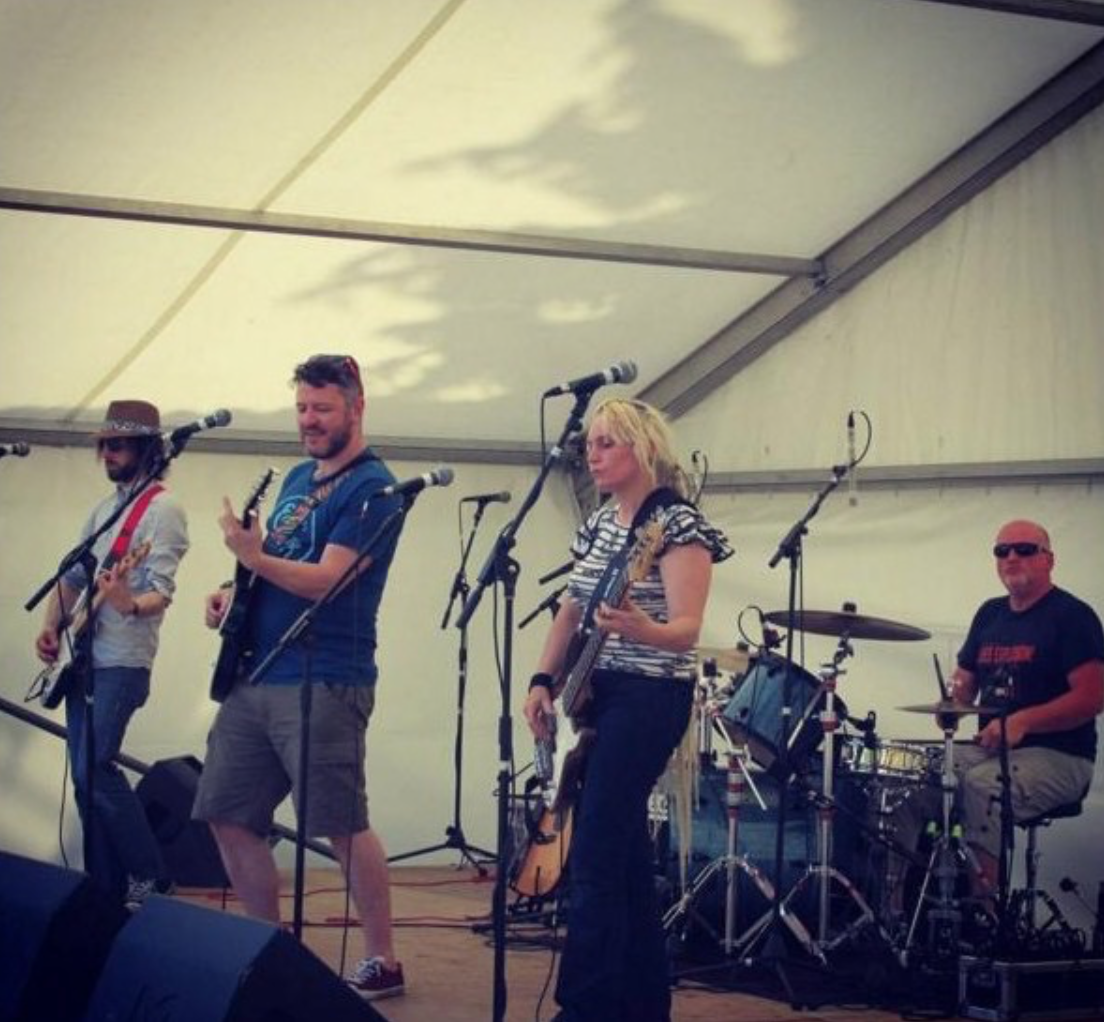 Since I don't work for a commercial music magazine, I have the luxury of being able to review whom I choose. That means I review who I like. I would be uneasy reviewing any artist whose music I felt didn't move me in any way & I am pretty sure that anyone I have ever written about was someone I felt had the capacity to move onwards & upwards in their career  but also that I felt I'd like to see do so.

It is with pleasure therefore that my latest review is of a band whom I'd certainly cite within my top four of five from the Coventry & Warwickshire area as one I think currently has the potential & in my opinion, deserves to do well: namely Rosetta Fire. I am sure many Hot Music Live readers would agree with me on that as they have been a really popular live act for some years now & they have also been "Artists of the Month" on the BBC Coventry & Warwickshire Introducing show which for so many of us is a gold star mark of quality. If you do not know who they are, the band consists of Anthony Gliddon (vocals) and Jimmy Lapworth (guitar, vocals) who have played together as Rosetta Fire since 2009, plus Emily Knight on bass, Matt Ball (keyboards/guitar) and Andy Wheeler (drums).

To be honest, for one reason or another, I had not seen them for a while before the Leamington Peace Festival & you may recall my review of that event: what struck me that afternoon was the impact on me of their performance, given that to my mind it was one of the strongest Peace Festival lineups for a long long time and the impact on the audience: they played towards the end of a really sweltering day when everyone was wilting & still stirred up a storm. I imagine that many others have commented upon the obvious honesty & integrity of their playing, coupled with their power & subtlety, but I can't see why I can't reiterate these comments...: see my photo below from that day.

And so to the new EP: "On The Line"... which comes in a really witty & high production value sleeve... I never thought I'd mention that sort of thing in a review, but it is that good. If you buy it, you'll see what I mean, but I attach a glimpse for you too to whet your appetite. The music inside is even better. The four tracks were recorded in Warwickshire with producer and engineer George Shilling, who has worked with the likes of Primal Scream, Bernard Butler, Teenage Fanclub and Paul Weller.

The single, "Mr Telephone" appears as track 2: if I tell you that this song was selected for my current car mixtape, you'll guess what I think of it. A beautiful mix of moods & styles which fit together to create a song with multiple dynamics, which struts & pleads and even bounces as the lyrics require. A crisp instrumental arrangement which, as all good songs tend to my opinion, serves the story rather than stifling it with Anthony's trademark soulful voice taking the lead and glorious harmonies remarked on by Brody Swain no less.

The EP opens with "Cry Out Loud", a song co-written by Anthony & Matt (the other three are compositions by Anthony & James). If Brody likes the harmonies on "Mr Telephone" then I imagine he'll appreciate them on this one too: another powerful & melodic rock number with compelling shifts in pace & tension & which sets the tone for the EP effectively.

Track three is "FATM" which introduces a funkier side of the band to great effect. I particularly liked this track & it's going onto my next mixtape: I can't wait to hear it in the confines of a packed inside venue: I bet it goes down really well. The whole mixture is superb, but maybe I'll highlight the humour involved (often neglected in modern rock) and the guitar solo appealed too: reminded me of Ernie Isley a little: one of my favourite r'n'b players.

The final track is "You Turn Me On": perhaps the heaviest grooves on the EP and with a slight Peter Gabriel feel to the vocals and saturated with more cymbals than I have heard for a long time.

Find out more about the band here:

You can buy "On The Line" here:

Not surprisingly, it is a while since I've been able to report to you on Rosetta Fire.
[2 images] END_OF_DOCUMENT_TOKEN_TO_BE_REPLACED

Readers of "Hot Music Live" will not, I imagine, require reminding of my admiration for Rosetta Fire: so equally they'll not be surprised to ...
[2 images] END_OF_DOCUMENT_TOKEN_TO_BE_REPLACED