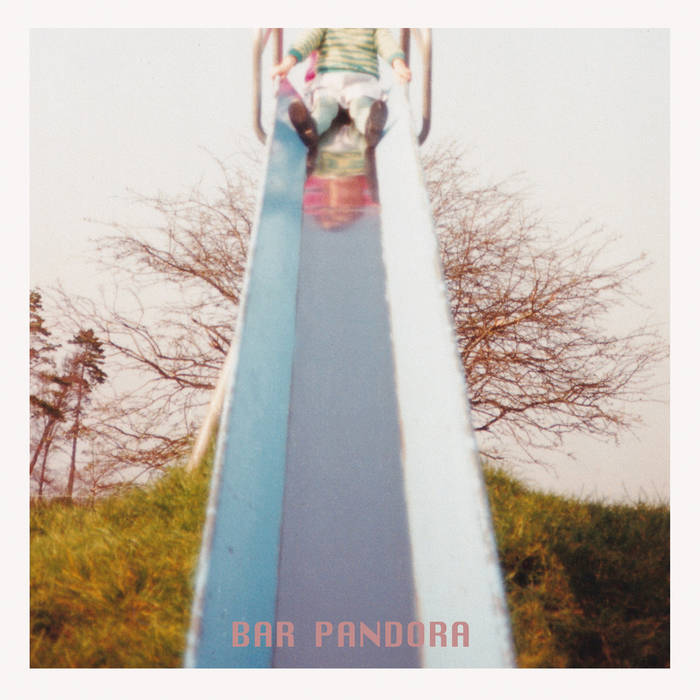 I think that the last few years taught us about the relativity of our perceptions of time if we had not considered them before. Personally I'm still not very confident with remembering the chronology since February 2020. That's why I nearly started this review with some sort of reference to "the long awaited" debut & eponymous EP from Bar Pandora when I stopped & realised how short, in objective time Charlie Tophill's project has existed as far as we're concerned.  Her debut single came out in September & she is still well short of double figures of gigs.

In subjective time however (and that's what I go on these days), it's hard to think of an artist who has made so profound an impact in so little a time in recent years & so the "long awaited" term makes sense in that condensed frame.

It would seem that Charlie has a similar perspective: and from the sound of it, a greatly enhanced one as it is for her, her first actual completed EP "after a lifelong habit of sitting on unfinished projects" and some fifteen years planning to but not succeeding in working with Dave Jordan (aka Simply Dread) her collaborator on the EP. Seen & understood in that context, you can even better grasp the meaning of today's release.

And what a few months it has been. As I said, the impact of Bar Pandora has been immediate & powerful. This magazine caught up with her fairly quickly in hindsight, but at the time, given how swiftly the word was spreading, it seemed like we were coming to the party late. In the meantime many other media have reviewed & praised Bar Pandora, they are in high demand for live appearances & are BBC Introducing for Coventry & Warwickshire's Band of the Month for July 2022: Who on earth else could they have selected?

And so to the EP. As I've said before, the resurgence of this form of release has interested me & even within the arcane confines of the study of EPs, there are several alternative strategies: some artists release literally every track as a standalone single resulting in an EP which acts more or less as a compilation. Charlie has gone partially down this road as previously issued & reviewed (and critically acclaimed) singles "Dear Man", "Look At Me" and "Vice Vice Vice" are present and correct. However Bar Pandora fans will not yet have had the chance to own the other track "Two Colours" and I think this was a wise move in order to reward her fans.

For those coming to the project fresh (and there are more and more by the week: especially I'd imagine after today), the EP is a great introduction. Four songs enables one to get a sense of what Bar Pandora is about while allowing the listener to luxuriate in a limited number of tracks & really get to the bottom of them: which is especially important given the complexities and nuances in the many layers of these finely wrought songs.

As explored in the reviews of the singles from the EP already released, one of the delights of Bar Pandora is how such an artistically subtle & allusive writer has also gained popular acclaim: I have cited Kate Bush before & might possibly have suggested Patti Smith, Bowie, early Roxy Music or Talking Heads, but the dichotomy between the two has long been reinforced by quite a high & impenetrable wall. No doubt the sheer originality of Bar Pandora is what is attracting much of the initial attention (to be honest most of the people I knew who started praising her to me were the sort of people who'd definitely favour the high quality mavericks & avant garde musicians over the mainstream) but she's gone: almost in the blink of an eye, straight past that point.. which is wonderful.

Without hopefully upsetting you, in terms of this review I think I'll let my previous three stand in respect of what I said at the time they came out as singles: though I've subsequently heard further elements in them & my respect for them has only increased, I think further exploration of them is your hands, reader.

The "new" song, "Two Colours" is another utterly idiosyncratic track whose roots in a cut up technique presumably account for the unexpected twists & turns which are even more idiosyncratic than the three selected to be singles (there is probably a reason for that decision to be found in the sentence). Musically it's the most adventurous of the four: very Eastern in its predominant use of tuned percussion (or that's what I take it to be though as you might expect with Simply Dread, a great bass sound suddenly pops up every now and again: not something you'd expect given the rest of the sonic picture) and vocal lines so layered over one another that you feel you've wandered into a crowded room & need to figure who's talking to whom & about what before you can make any sort of engagement with the words. Once you're there, you need repeated plays (I insist) to get to the bottom of the meaning & once again Charlie has created a track you have little choice but to return to many times. Not that the pursuit of the message of the song is a finite affair: I've played it repeatedly already & it keeps eluding me.  Is it about surface attributes of style & fashion or is she playing games around dualism here? Are we talking about contrasts & complements or even polar extremes? Knowing Charlie, we could be embracing them all: and yet despite possibly playing games, she is very insouciant about it all, suggesting that she can take it or leave it at her will. There is a compelling passage regarding the notion of free will & I guess one can take the song as a rejection of dichotomies as an entire range of options & instead forge one's own (third) alternative.

These ideas in fact slip into mantra form (quite appropriate given the music) and insinuate themselves into your mind without delay.

It's misleading in a way to concentrate on this single track, even if the others have already been discussed in the magazine, to the point of their exclusion from this review in the context of a precise four song collection. This is because all four offer us differing insights into the mind of Bar Pandora: some aspects are common to them all: not just the technical aspects of how they were created but also this didactic element. All can be taken at a very immediate level & enjoyed as each is mellifluous & warm hearted. However that's deliberately denying yourself the more cerebral pleasures of processing those questions you are being asked throughout. Questions you may not be able to fully answer, yet which stimulate other parts of the mind other than those touched by the musicality. And that brings us back to the starting point: the project name & its genesis in a collective experience of sharing philosophical enquiry & sparking a dialectic off amongst a group of friends. That's arguably what this EP is doing once again.

I wonder what is next for Bar Pandora? I suppose one issue might be that demand from her might outstrip supply, but given what Charlie has said about the gestation of the project & her clear emphasis on artistic quality, I can't imagine her lowering her standards simply to respond to calls for more material: when the next record comes, I'm certain it will be to as high a standard as what has come to date. What I can say really confidently is that it will take me by surprise & it will act on my intellect as well as my emotions. And yours.

I am sure I'd have supported the Elevate Festival last evening regardless of the stellar lineup, as it was both celebrating fifty years of ...
[8 images] END_OF_DOCUMENT_TOKEN_TO_BE_REPLACED

In the relatively short period of time (about five weeks) since I reviewed the most recent single release "Look At Me" from Bar Pandora, things have ...
[1 image] END_OF_DOCUMENT_TOKEN_TO_BE_REPLACED

Fresh out today from Bar Pandora is her single "Look At Me".
[1 image] END_OF_DOCUMENT_TOKEN_TO_BE_REPLACED

It's great to review Bar Pandora for the first time in the magazine & I'm sure that it will not be the last time.
[1 image] END_OF_DOCUMENT_TOKEN_TO_BE_REPLACED