"Watching You" by Liam Vincent & The Odd Foxes


"Watching You" by Liam Vincent & The Odd Foxes 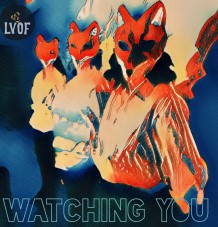 When I reviewed Rebecca Mileham's excellent ‘Underground' EP last month, I made reference to her roles as violin player & vocalist in Liam Vincent & The Odd Foxes.

Now, with the upcoming release of their new single "Watching You" on 30th May, (the follow up to their debut ‘Pierson V. Post' EP from last year which they created during lockdown) I have also the opportunity to write about that band for you.

Comprising Liam Stuchbury  on guitar and lead vocals, newcomer  Gregg Cave ( who you may know  as part of folk rock supergroup TRADarrr) on guitar & vocals, Matt Berry  (who produced ‘Underground') on bass and vocals plus Paul Disley on drums in addition to the aforementioned roles Rebecca plays, the band , as Liam tells me, "..don't take ourselves too seriously….. but I'd say the philosophy of the band has a lot to do with believing in humanity and kindness but not turning a blind eye to injustice. Fighting for what you believe in knowing that you're probably going to lose" which is just fine by me.

In fact "Watching You" is a pretty intense song delivered with a considerable level of passion & certainly inclining to that part of their mission statement concerned with fighting for values & against injustice.

Very much from that area where folk got invigorated with the energy & social comment of punk & whence bands such as The Pogues, The Men They Couldn't Hang or The Levellers sprung, "Watching You" takes aim at many malaises of the modern world: the erosion of the right to protest & speak freely, corporate greed, Establishment sleaze & hypocrisy and above all the surveillance state & roars with righteous, if melodic anger.

For, as Liam also told me: "..for us, the music and melody is as important as the message. So if someone walks away humming the tune as well as having something to think about then we'll take that as a win but if people want to come to a gig to just dance and singalong but not pay attention to the meaning behind the songs, that's fine too…"

Well you can surely dance along to this single (though it's a fast furious one so you'd be left knowing you'd had a dance and draws heavily on Liam's Irish musical heritage & upbringing as well as his time in punk bands)) though you'd really have to be very inobservant not to grasp its meaning: the lyrics & their articulation don't fall into any category of ambiguity.

I have to confess that on a personal level this appealed to me greatly: it excited me & frankly I agree with the sentiments. That it reminded me of several bands I mentioned above whom I really like hardly hurt either.

Leaving aside (as a disciplined reviewer ought) my personal prejudices, I am sure that the band & the single have considerable merits seen & heard objectively.  They are superb players and their talents, experience & tightness as a band enable them to be free to create a compelling & furious jig which then uses its melody to draw you into its actually quite complicated and important message, which it puts across without getting overly didactic nor polemic yet also without compromise nor equivocation. I'd certainly greatly like to catch them live on this evidence.

If you too would like that, you can see Liam Vincent & The Odd Foxes on:

Look out too for the video (available from 23rd May) as it becomes public a week before the single is available so you can check out what I've just been telling you about.