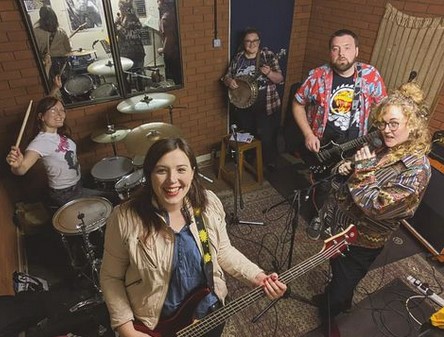 One band whose name seems on many lips at the moment is the wonderfully named Septic & the Tanks. In order to keep this magazine as near to the cutting edge as possible, I was eager to catch up with them as their star is rising on a steep trajectory right now: based entirely on live performances as they have not yet released any recorded work.

Firstly, I asked them, who in fact is Septic & who are their Tanks? How did they come together?

"We have Robin Synnott on vocals, Lucy Kenny on banjo, Sarah Croom on bass, James Croom on guitar and Sophie Williams on drums. I would say we formed in the Spring of 2021, forming together as a means to learn our respective instruments and challenge ourselves personally.

Other than James we were all new players to our respective instruments. Lucy had been left her Dad's old banjo when he passed away and wanted to put it to good use, and Sophie and Sarah were very interested in picking up their own instruments and learning to play after having just been fans of live music for years.

We weren't having much luck in terms of song structures and when Robin came in on vocals we started to find our flow a lot more. It's a dream come true to be in a band with people who are not only your best friends, but who are full of creativity and ideas. We have a lot of fun learning together and I'm proud of us.."

"We honestly just thought it was funny. There were a few band names we moved through at the beginning such as Turboshandy, and I (Sophie) was quite into the idea of Pollen at the time, but I think Septic and the Tanks has become a bit more of an identity recently.

Later on we found out about Lee Dorrian's Septic Tank band and although we don't sound anything like Napalm Death or that whole scene it is nice to have a similar band name to historical Coventry music and musicians."

I see you describe yourselves as "banjo punk fusion" so any amplification of this would be interesting….

"I would say we're a very fun mix between punk and grunge, with a banjo twist. We are currently talking about introducing all sorts of instruments into the mix to keep things a bit wild."

Do you have specific inspirations in terms of other musicians?

"We tend to have quite different music tastes really as people but bandwise we like The Linda Lindas, Bikini Kill, The Misfits, The Pixies, Hole, The Distillers, Nirvana, and L7."

What sort of ambitions have you for the band?

"Have as much fun and positive experiences as we can. We're all for safe spaces for people to have fun without any fear or judgment too, and we're hoping to put something out there to help ensure this and to help safeguard people at gigs."

What activities do you have planned? Where & when can our readers hear you?

"We'll be playing Covtember at The Tin this coming September, and we've got gigs to be announced for June, July and August too. Hopefully recording an EP this summer too. Nothing is available for anyone to listen to yet beyond the odd phone recording, so that's why you've got to get out and experience us in person!"

How do you think the local music scene will shape up post-pandemic?

"Over lockdown a lot of Cov bands have split up, which is always sad to hear but it's interesting to see what will come out of the city now. There's a space for fresh music to come forward which I think will be very interesting.

Otherwise, it's a mix really isn't it. The pandemic might make certain elements of being in a gigging band more difficult, but it also will see more people taking advantage of events where they can and trying to make the most of gigs where they can."

Have you any suggestions or recommendations for our readers please: either local or non-local musicians they may or may not know?

"Yes!!! Paradise of the Titans, Grail Guard, anything that Boudica put on, Lady Tracy."

So there you have it: a really interesting, exciting & unique band already with philosophies and takes on life and music which certainly appeal to me & I am sure will to many others. The best thing of all is that this is a band who already have figured out who they are, yet whose true glories are mapped out ahead of them. I'm sure that once we get into the world of recording, bringing in the further exotic instrumentation and once their name gets recognised even further afield, they'll be namechecked by vastly more people & if you heard of them first here, then so much the better.

You can also catch Septic & the Tanks at the Tin on 4th June when they'll be playing a live set along with a screening of Derek Jarman's 1978 classic "Jubilee", one of whose stars, Jordan, sadly passed away last month.