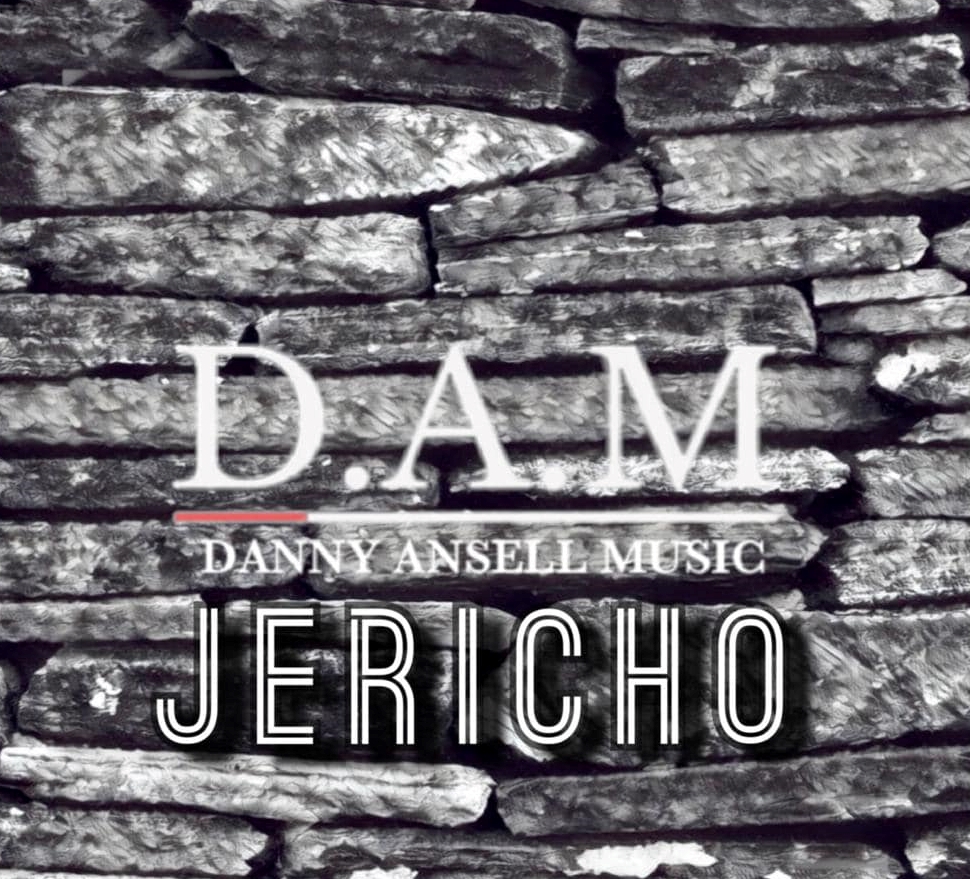 The first Danny Ansell release of 2022 has been revealed as "Jericho", which follows December's "Wishing Well".

Recorded at his own D.A.M. Studios (apart from Steven Shelley's drums which were put down at C M Studios, also in Coventry) with Danny on his customary vocals & guitars (and I'd imagine the keyboard parts too) and Patrick Beard providing bass, a trio which has recently celebrated a year together, the song itself dates back a few years: Danny played it with his late cousin Steve Madden (whose track "Juliet" can be found on ‘Hot Music Live Presents Volume Eight' and whose talent will soon be remembered & shared with the release of the ‘Here and Gone' album on Glasslip Records) and it has already established itself as a highlight of his live set.

What is a bit spooky for me is that writing the day after I praised The Rising for their continual moving forwards musically, I find myself needing to say much the same about Danny.

Again, such is the popularity he enjoys & such the esteem, he could quite easily have settled back and released what his core audience would have expected as "Danny Ansell music" and been praised for this. Instead, there has been a real surge forwards into new areas for him & the confronting of expectations: starting for sure with his ‘As It Goes' album & the subsequent singles: the body of work he has built up over the last three years or so is most impressive & builds upon his legacy from earlier: had he just repeated past triumphs & played to what were perceived as his strengths, I'd not be writing this. Instead he has challenged himself & developed additional strengths: and all without producing music which is difficult to access nor too abstract.

For "Jericho", as I've said , is another catchy hook filled tune (how Danny Ansell audiences cope with his sets is always a mystery given how full they are of anthems with few chances of a breather) but of a very different style to "Wishing Well". However I do find something of a comparison in the person of John Lennon: while I suggested his possible influence in the psychedelic blues rock of the earlier single, here you might possibly find a very different aspect of his work: his raw & stark early 1970s solo records.

Danny's voice is thus rather high in the mix: more so than usual, over an uncompromising rhythm section and he sounds positively anguished at times as his emotions get the better of him.

It's a very bold sound he goes for & he certainly pulls it off successfully: it's this confidence in his own abilities & panache with which to rise which to challenges & soar past them that are continuing to elevate him as an artist.

A passionate commitment to continue trying to overcome even the most apparently impossible of such challenges, "Jericho" (and what an effective metaphor that is) is pretty much a manifesto for what Danny is doing with his music currently: he doesn't want to admit the possibility of failure & so that in itself strengthens him to ensure he can succeed. It's a potent message too to encourage his listeners.

Apart from the superb string of releases in recent months, it's worth mentioning too that the band have been out gigging a lot too, playing with bands such as Marquis Drive, The Dirt Road Band & The Primitives with plenty more in the diary such as:

Sunday 5th June at The Tiltyard, Kenilworth.. in association with CV Collective SC … all day event

It's a great & somewhat rare privilege to give you as much notice as I am here with Danny Ansell's next release "Wishing Well" as it ...
[1 image] END_OF_DOCUMENT_TOKEN_TO_BE_REPLACED

The most recent occasion on which we reported on Danny Ansell and his music was back in April, with the release of his "Slice of Cake" single.
[1 image] END_OF_DOCUMENT_TOKEN_TO_BE_REPLACED

Despite his skill at honing crowd pleasing anthems, the reality of Danny Ansell's songwriting is the subject matter he covers is actually very ...
[1 image] END_OF_DOCUMENT_TOKEN_TO_BE_REPLACED

One of my personal sadnesses (among several) for our local music scene was  that Danny Ansell's long awaited ‘As It Goes'  album came ...
[3 images] END_OF_DOCUMENT_TOKEN_TO_BE_REPLACED

I've said it before, but I'll say it again, I especially enjoy (and enjoy writing about) music where it touches base with other art media.
[1 image] END_OF_DOCUMENT_TOKEN_TO_BE_REPLACED

‘Satellites'   is the most recent single by Danny Ansell & Co (Danny Ansell on vocals and guitars, Roger Greasby on drums and Patrick Beard ...
[1 image] END_OF_DOCUMENT_TOKEN_TO_BE_REPLACED