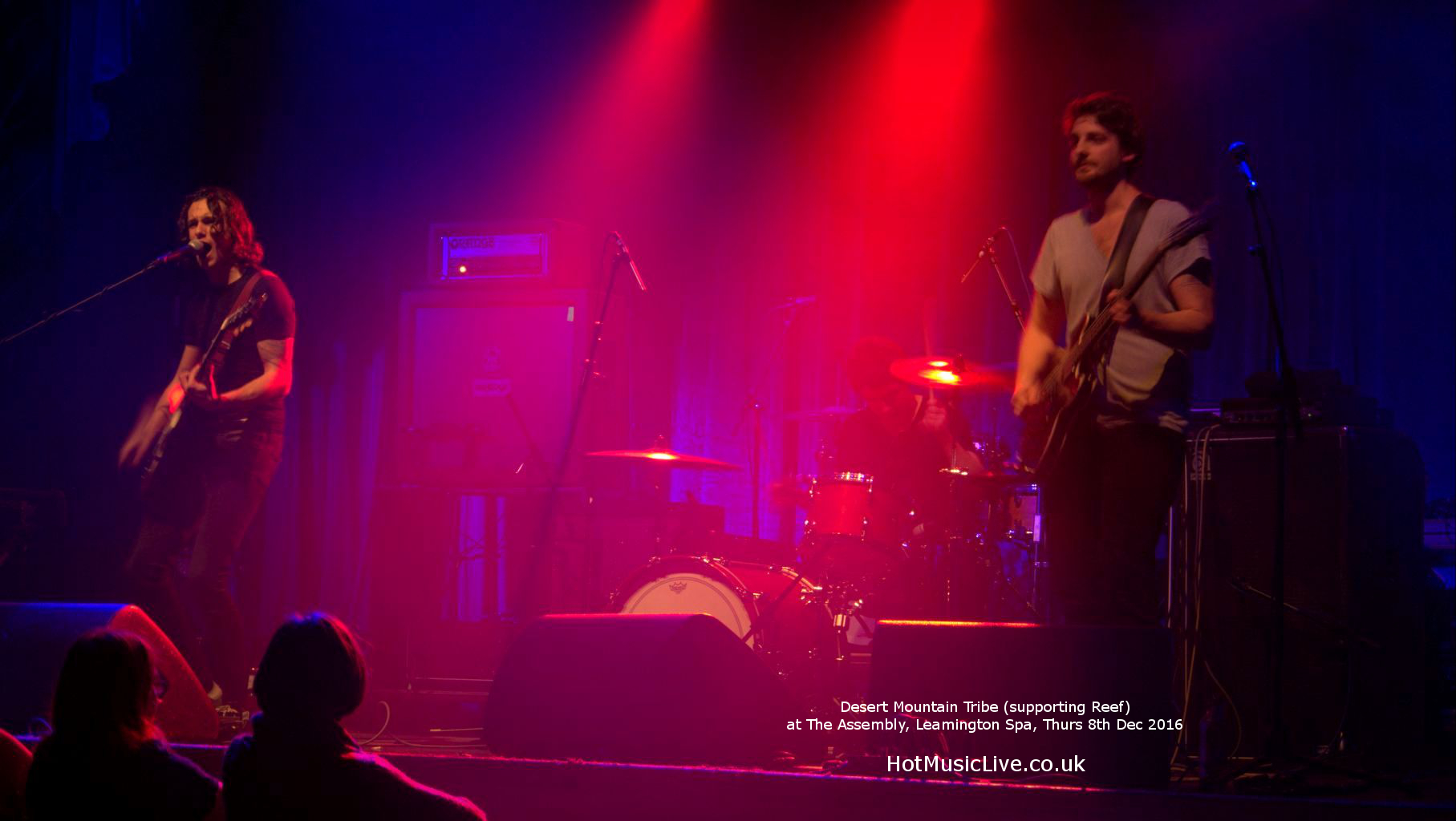 There was no hanging about tonight, no sooner than back from the day job, I was off out again: The Assembly were squeezing in 2 bands before a club night! Armed with our cameras, tonight's 3-man Hot Music Live team arrived at 7pm, just in time for the doors to open, yet still ahead of the crowd apart from a half-a-dozen avid female Reef fans. A short delay, then we were in… but not very far in - the staff need to locate our promised photo passes! Despite this taking only a few minutes, by the time we had raced up the stairs, the support band, Desert Mountain Tribe, were already half-way through their first song!

The three-man unit, Jonty Balls (guitar/vox), Felix Jahn (bass) and Philip Jahn (drums), apparently play psych/kraut/shoegaze. [Who the hell comes up with these genres? Ed.] These guys recently headlined, and packed out, London's Electowerkz, however, being a support band can sometimes be a cruel job: a ten minute sound-check and an early half hour spot to a very sparsely populated room. Deserving better after their recent tour successes, they didn't shirk from the task in hand, making several new fans while they were at it, including the HML team. The room steadily filled as they made their way through their short set - all six of their songs tonight were from their highly-rated debut album, 'Either That Or The Moon'. Whatever the official genre is, their sound consists of anthemic vocals, cutting guitar, dominant bass riffs and a powerful back-beat to create their own wall of sound. Awesome! Shortly after leaving the stage, they appeared out front to spend time with their new admirers at their merch desk, Felix even stopping to have a brief chat with me - nice touch! The Hot Music Live team wish them all the best with their upcoming US tour - definitely a band to keep an eye on!

You can learn more about Desert Mountain Tribe in my previous article where I shared the official promo blurb with you: http://hotmusiclive.co.uk/article?article=1313

Last month, a 3-man Hot Music Live team (MikeD, PaulD and I - *) were at The Assembly not only taking photos of Desert Mountain Tribe, who were ...
[0 images] END_OF_DOCUMENT_TOKEN_TO_BE_REPLACED

Two weeks ago, we gave you Reef's official press release for their current tour, which sees them headline at The Assembly on Thursday.
[1 image] END_OF_DOCUMENT_TOKEN_TO_BE_REPLACED

AMBER RUN have announced an acoustic live show ‘AMBER RUN UNPLUGGED' at The Assembly, Leamington Spa on 10th May 2022 TICKETS ARE ON SALE NOW ...
[1 image] END_OF_DOCUMENT_TOKEN_TO_BE_REPLACED