‘All of the Fallen Stars' by Kenzie Webley 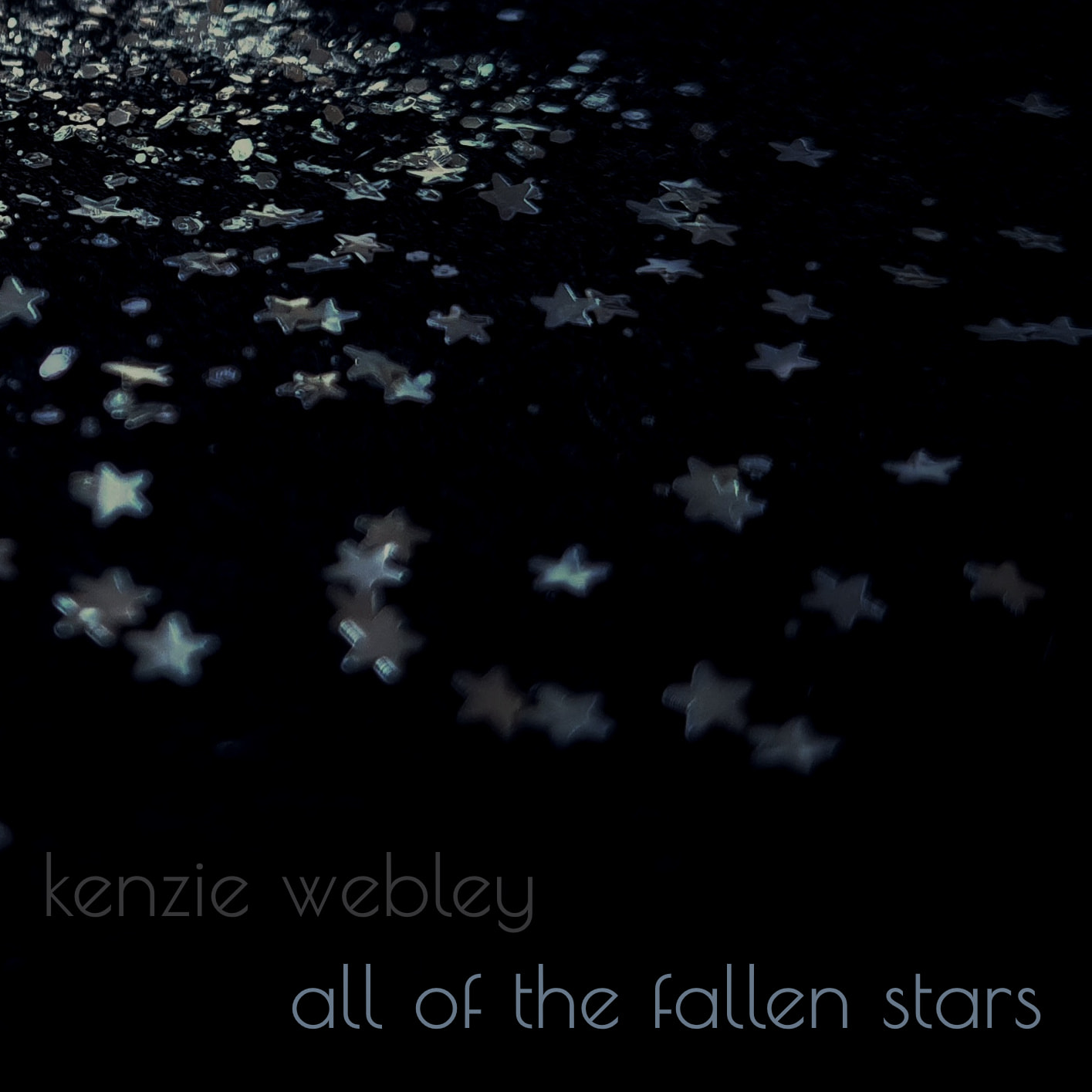 Fans of Kenzie Webley will, I am sure, have been aware for many months that she has been working on her debut album at 14 Records in Leamington: I mentioned it as far back as last October in the magazine.

Impatient as they no doubt have been to hear it (I speak for myself too), they probably realise that although the songs themselves have long been composed, the recording process has been delayed somewhat: Kenzie now of course is away at university for much of the year & then at the end of last year, THAT infection robbed her of her singing voice when the vocals were due to be laid down.

Thankfully now ‘All of the Fallen Stars' is ready for release now & I can reveal that it's been totally worth the wait. You can get one of the very Limited Edition (only 50!) hard copies by contacting Kenzie directly (https://www.facebook.com/kenziewebleymusic/) and the digital release will follow shortly.

In many ways, the steady development of the record reflects Kenzie's general approach to her craft: taking time to get things absolutely right & not letting imperfections sneak in through rushing.

Starting with her self produced "Nicotine Kisses" track which, once shared with the world, laid down a marker of what she was capable of, Kenzie soon switched to professional recording & has released a string of really well received singles: "Crooked Hearts", "Head v Heart", "Make You Stay", "Loveable" and most recently "The Lucky One", each given time to sink into our collective consciousness and make its own impact. If you put the "quality or quantity?" question to Kenzie, my money would favour her going for the former.

The album collects these earlier triumphs together and adds five new tracks (I gather these comprise her first ten compositions, though possibly she may not be counting "Nicotine Kisses", unless that one is one of the "next ten" bound for the follow up she is already planning). In fact the overwhelming sense of an artist who knows precisely what she is doing is reinforced by the fact that the album title has been decided in her head from the off.

In addition, I'd suggest that further evidence of this careful & perfectionist approach is the themes of the songs: yes Kenzie clearly wanted us to listen to them intently but that's partly because she does not shy away from "difficult" ideas: as my reviews of the singles repeatedly mention. None can have been easy to write considering the sensitivities involved, but the effort & care have been rewarded many fold.

Anyone who can write songs about depression, mental health, self harm, self pity, personal responsibility & romantic angst sensitively enough not to make light of the subject matter, yet set them in melodic & often jaunty pop settings, often belying their subject matter, is no slouch as a composer.

And that's really what ‘All of the Fallen Stars' is all about. This is a really empathetic writer who senses what others are going through & can reflect just as easily upon her own journey and emotions, yet on top of this far from common set of skills, can also see issues from varying perspectives & articulate them all in easily accessible song forms. There is nothing terribly waspish on view, but a considerable quantity of compassion, even when she understandably confesses she doesn't have the answers.

The title, as I said, is clearly central to this piece of work & maybe its meaning is sufficiently personal to Kenzie that we ought not probe too deeply (well that's been my approach). However as a reviewer, I'm prepared to speculate that in every song, there might be a character to see as a "fallen star" in some respect.

Kenzie can write jolly jaunty tunes as I've already told you, but nevertheless she has a great capacity for weaving melancholy & wistfulness throughout her songs (and these qualities, while adding pathos in its correct meaning, do not equate to weakness of resolve). This tends to give the impression of some of her characters being analogous to those in classical myths: doomed & tossed about by fate, yet if that is the case, it tends to add to the sense of compassion on display.

And so from the general to the specific. Leaving aside the previously reviewed single releases (though producer  Matt Waddell at 14 Records has ensured that you don't  just get what you've already paid for by offering new remixes), the tracks which debut here are called "Palinode", "The Fall", "Happier", "In A Mess" and "One Night".

Each, as you've come to expect, demonstrates Kenzie's ability to make a song which, on close inspection, must have taken a great deal of care & sweat, yet still sounds spontaneous.

"Palinode" is superb: exquisitely arranged and produced to squeeze the maximum out of the composition & performance, Kenzie seems in top form in terms of confidence in her own singing and produces many nuanced moments within it. Timeless, seemingly outside of contemporary genre classifications (though there are tiny country hints), it would make an ideal single in my opinion. The title suggests that she is explicitly changing her mind about something she had written in a previous song: now there's a challenge for us listeners to work that one out…

"The Fall" fits well with it: yes, I'm going to say it's single material too. Even more upbeat than "Palinode", this track has a fuller arrangement to contrast with the more intimate ones on the album. Check this one out if you'd like to hear Kenzie really swing.

"Happier" bops along in a refreshing manner (and one can detect the hand of Gemma Waddell in the vocal harmonies I think),  but in one of those instances I relish in songwriting, the lyrics work in contrast to the musical tone, creating a memorable tension: and please remember what I said earlier about the thread running through the album: these cheery sounding new songs contain their fallen angel quotas.

"In A Mess" (which you may have heard already played on the BBC) takes us back to what we might think of prime Kenzie Webley (to date): a string & piano led ballad: classical & classy with her voice placed high in the mix: thank goodness she waited until it was ready for the recording. You probably won't need too many guesses as to the lyrical content given the title.

Finally, "One Night" is yet another addition to the Kenzie lexicon: a most agreeable piece of jangle pop whose fallen angel was involved in (you guessed it) a one night stand. And yes, it would make an excellent single…..

There's all that compassion & good will, even when many of us might lose our rag & admit defeat, yet despite these very strong threads of commonality, each track has a very distinct identity.

I occasionally muse in my reviews at how so many artists whom I write about nowadays seem to concentrate on singles or EPs at the expense of full albums. There are so many good reasons for doing it including economics and I think every track on a single/EP gets better attention than some on albums do: and certainly more airplay/streaming. Partly that was due often in the past for some artists , to the difficulty of sustaining quality & diversity across so many songs: one necessarily got relative "filler": perhaps the biggest trap for an artist contemplating an album. There is no filler on ‘All of the Fallen Stars' and that's a fact. Partly due I imagine to having previewed half the tracks in their own right as singles, it also shows Kenzie's diligence & attention to detail. You cannot imagine her allowing a lesser quality track to be issued.

Inevitably, you may find yourself gravitating towards certain tracks (we probably all do) and there must be an argument that in times of alleged decline in attention spans, an entire album is hard to get our heads round. But please do take the time to do this with ‘All of the Fallen Stars' as it will reward you. The songs you hadn't heard before are at the very least as good as the previous releases and frankly there are probably ten potential singles on it.

There is simply so much to write about here on each playing I hear more & my desire to complete a review of readable length alone holds me back a bit. I'm really enjoying playing it over & again.

I could though mention (and I should) the humour which crops up repeatedly as a counterpoint to any melancholy & offers barbs in the lyrics.

My own opinion is that (assuming the single recordings predate the others), Kenzie's singing just gets more & more confident as her career progresses. In an area absolutely blessed with so many wonderful female singers at the moment, as they all sound utterly distinctive (thank goodness), she brings a particular warmth & humanity to her technical skills. Similarly, against the wider backdrop of so many great writers at the moment (aren't we blessed?), Kenzie Webley has her own unique slant, balancing compassion, empathy, pity & optimism.

Have you noticed that not once in this review have I compared her directly to any other artist? That's because I can't.

For those of you who were wondering about the activities of that rapidly rising local star Kenzie Webley, I am able to bring you up to speed.
[1 image] END_OF_DOCUMENT_TOKEN_TO_BE_REPLACED

I'm delighted to report to you the release of a new single by Kenzie Webley on 21st May, namely "Loveable" .
[1 image] END_OF_DOCUMENT_TOKEN_TO_BE_REPLACED

When I interviewed Kenzie Webley the other week for the feature in the magazine, she was busy at 14 Records laying down some brand new tracks for us.
[1 image] END_OF_DOCUMENT_TOKEN_TO_BE_REPLACED

In my interview with Roddy "Radiation" Byers of The Specials etc earlier in the week, I observed how the pandemic has cut a swathe through the music ...
[1 image] END_OF_DOCUMENT_TOKEN_TO_BE_REPLACED