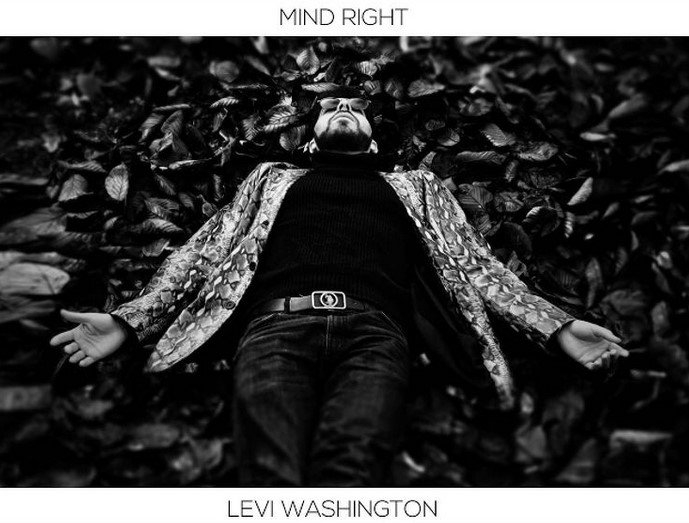 After the angst of last week when he agonised over the mix of "Carrie, Baby" until Wednesday & the existential angst of the preceding "Check 1, 2" this week's Levi Washington single is called "Mind Right": again it too casts its eye over this thing of life and our extravagant journey through it.

To be honest, as I was aware of the title before I heard the song, my first  instinct was that in some way it might concern itself with a search for decent mental health: not least since that is a theme which the artist returns to regularly. On listening to it, I pretty much still think that the title remains a nod in that direction, as do aspects of the words, though, as you might imagine with Levi, there is much else that he's getting his lyrics to do for him & us. It's another of his onion songs.

Musically (again it's dubious that he'd hit us with two similarly sounding songs in a row) the new track is a long way from its predecessor. This is both retro (some very psychedelic stylings) and bang up to date contemporary & he melds them together perfectly….

A languorous propulsive beat carries you along this rather fuzzy pathway with processed vocals pulsating around you: sometimes rather close, then receding further off. The images evoked include those of chasing the apparently elusive and also of life events breaking over you like waves: both come through the music effectively with the tune coming at you like sea breakers and the vocal running ahead of you down the forest path, challenging you to catch up with it. Levi has also gone for a sense of quiet desperation (which of course Roger Waters once memorably called "..the English way…") and that too is in there. There is a wooziness which may be the heat of a summer day or the effect of the self delusion that the pursuit is worth the prize: which Levi definitely questions.

So there you have it: a lot of mixed (and possibly incompatible) allusions from me, mirroring a rare old mix of imagery mashed together in a song which itself is a bit of a compendium of music of the last half a century as well as possibly being a self help guide. This is one of the Levi songs you could usefully replay & pick out bits over quite a period of time, though you'd better get started on that sharpish as they'll be a new one along very soon….

It's back to business nearer usual for Levi Washington with the release of "Same Ole U".
[1 image] END_OF_DOCUMENT_TOKEN_TO_BE_REPLACED

It was grand indeed to catch up with Levi Washington live on Sunday on the Bandstand, but it's back to the weekly business as usual now with his ...
[1 image] END_OF_DOCUMENT_TOKEN_TO_BE_REPLACED

I was pleased to hear that Levi Washington is managing both his health issues & his rapidly expanding portfolio of commitments running live events ...
[1 image] END_OF_DOCUMENT_TOKEN_TO_BE_REPLACED

I'm sure many readers will have been saddened to hear of the illness of Levi Washington last week and his consequent hospitalisation.
[1 image] END_OF_DOCUMENT_TOKEN_TO_BE_REPLACED

You can't fault Levi Washington for ambition: trying to release a new single every week against the background of organising so much live music ...
[1 image] END_OF_DOCUMENT_TOKEN_TO_BE_REPLACED