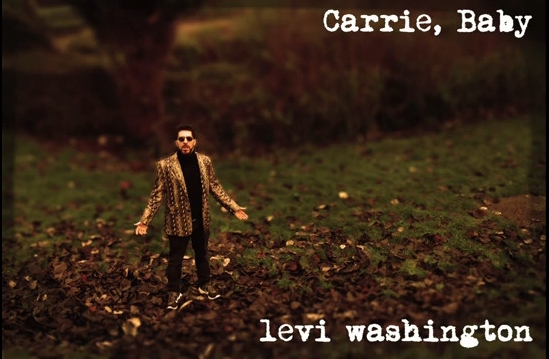 If last week's magnum opus "Check 1, 2" gave ample evidence of Levi Washington's perfectionism then this week's single release "Carrie, Baby" certainly reinforces that. I am currently writing this review within minutes of his finding a mix he was happy with, and as you can see, it has taken him until Wednesday to do so, missing his customary release moment by two whole days in order to present his work as he hears it himself & to its best advantage….  And on top of this he has decided to move to two releases a week. If you factor in the myriad live events he is currently organising each week around the area via his Phoenix Collective, I can only assume that he has phased sleeping out of his life.

Anyway, I'd better plunge straight into "Carrie Baby" before the next one arrives… In fact like the proverbial bus (or at any rate like they used to be), if you wait for a succession of Levi singles, you will experience the odd existential one, some dark nights of the soul, the odd nod towards addiction or mental angst, but you know sooner or later a love song, or something quite like one will come along to carry you off.

And "Carrie, Baby" is pretty much like a love song, though it's rare for Levi not to twist our expectations of the genre or offer us a view from an unusual perspective to challenge our preconceptions. Despite the long hours spent honing the recording, apparently this was a pretty spontaneous affair in terms of the writing & much could possibly be said of the narrative it offers us…..

A primarily acoustic number, showcasing his gentler guitar playing style (you can really hear his fingers shift on the frets on the main part (there are some beautiful extra embellishments on a second instrument plus an exquisite solo and a tinkling piano providing some extra foundation), the direction is probably towards where folk bumps into country: the basic tune being fairly straight forward, with the melodic adornments coming from the vocal part which certainly goes up in the direction of the top of his range at times.

Is it a happy love song: not entirely: at least it seems to delineate a romance in progress, with hope being favoured over attainment. He sets out his expectations and while he clearly isn't there yet, and some pleading is needed, he certainly hasn't given up. If you had to sketch a spectrum of Levisongs, while not at the "deliriously content" end, "Carrie, Baby" is certainly nearer it than it is the opposite one... which can be a gloomy & forbidding place to say the least.

It's back to business nearer usual for Levi Washington with the release of "Same Ole U".
[1 image] END_OF_DOCUMENT_TOKEN_TO_BE_REPLACED

It was grand indeed to catch up with Levi Washington live on Sunday on the Bandstand, but it's back to the weekly business as usual now with his ...
[1 image] END_OF_DOCUMENT_TOKEN_TO_BE_REPLACED

I was pleased to hear that Levi Washington is managing both his health issues & his rapidly expanding portfolio of commitments running live events ...
[1 image] END_OF_DOCUMENT_TOKEN_TO_BE_REPLACED

I'm sure many readers will have been saddened to hear of the illness of Levi Washington last week and his consequent hospitalisation.
[1 image] END_OF_DOCUMENT_TOKEN_TO_BE_REPLACED

You can't fault Levi Washington for ambition: trying to release a new single every week against the background of organising so much live music ...
[1 image] END_OF_DOCUMENT_TOKEN_TO_BE_REPLACED

After the angst of last week when he agonised over the mix of "Carrie, Baby" until Wednesday & the existential angst of the preceding "Check 1, 2" ...
[1 image] END_OF_DOCUMENT_TOKEN_TO_BE_REPLACED