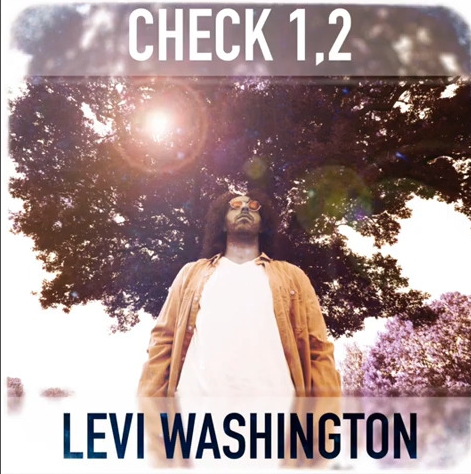 For his second single of 2022, following last week's "It's Cool", Levi Washington has opted for something of an epic and once again it's like nothing he's put out before. "Check 1, 2" begins as a spoken word piece over a stark piano backing (it reminded me instantly of something Kevin Rowland used to do with Dexys Midnight Runners occasionally: think of tracks like "Love, Part One", or "Reminisce (Part Two)" which very much confused those who only knew "Geno" and "Come On Eileen" at the time: and was probably intended to do so. It made people think, and this is a very powerful & indeed soulful weapon in the right hands.)

And Levi's hands are righteous in this and other respects. He is also (once again) pretty courageous in putting such challenging material out, yet surely that is no weakness in the true artist & I find it very interesting how trusting he is that his audience will follow him & respect his artistic choices, however much he demands of them by some of his releases: and if the format of "Check 1, 2" is markedly distinct from that of your standard mainstream commercial release (at least to begin with), then the content of other recent singles (such as  "Shank", "On The Wrong Side Of The Sunshine" or "Focus")  have asked a great deal more of the listener in terms of emotions & sensitivities.

In fact for those with the capacity to listen beyond the first minute or so (of  around a set of six), then you find a change of style as extra instrumentation kicks in (including I think some recorded backwards) & Levi starts singing.

I know he was weighing up a week or so ago which order to release the two first singles of 2022 & I personally think he made the right choice. "It's Cool" lays down the most appropriate vibe at the start of any year, but especially one which follows in the turgid footsteps of 2020 & 2021, and "Check 1, 2" is made of different material altogether. It is however I think the artistically more rewarding one & that which will resonate longer & more profoundly amongst his oeuvre.

Philosophically, it asks questions of us too: directly & explicitly in the prologue and then rather more obliquely through (and over) the calypso groove of the latter parts. I suppose that's the nub of the song: questioning & accepting that our lives & the world we inhabit is full of possibilities, some of which are predictable, others less so, with a mixture of experiences we might enjoy & the reverse. In this respect it's a sort of existential text, suggesting that we journey through our time here with our own free will being the major factor in shaping it.

If the start expresses some doubts about this, then during the as the song progresses, Levi seems to warm to the idea & embrace the possibilities of seeing himself as a free agent of his destiny, advocating it for the listener.

This is a real labour of love for him: I gather he has been polishing the track for at least eighteen months and indeed I alone have heard two versions of it in the last week which did not precisely align with his vision (this perfectionism accounts for why it has come out on a Tuesday rather than a Monday): it's interesting how many of the singles he is sharing during this weekly campaign are ones he has spent long periods of time honing & rehoning to get precisely right. "Check 1, 2" has had its edges smoothed plus sixty vocal and twenty instrumental tracks mixed down as I've listened and now is quite luscious in its sound: it feels like it's passed through a tropical waterfall & emerged a much more exotic creation which is some way now seduces as much as it questions: possibly Levi has settled on a two pronged attack on our minds?

Reading this article back, it seems that I've read a lot into "Check 1, 2" and although I dare say it must be a possibility that some of what I derive from listening to it is not precisely what its creator had in mind, I firmly believe that good songs must remain open to the interpretation of each listener who is entitled (up to a point) to make of it what they will. It's a profound piece & that must increase the scope for more subjective responses, and I applaud Levi for giving us the chance to do so.

It's back to business nearer usual for Levi Washington with the release of "Same Ole U".
[1 image] END_OF_DOCUMENT_TOKEN_TO_BE_REPLACED

It was grand indeed to catch up with Levi Washington live on Sunday on the Bandstand, but it's back to the weekly business as usual now with his ...
[1 image] END_OF_DOCUMENT_TOKEN_TO_BE_REPLACED

I was pleased to hear that Levi Washington is managing both his health issues & his rapidly expanding portfolio of commitments running live events ...
[1 image] END_OF_DOCUMENT_TOKEN_TO_BE_REPLACED

I'm sure many readers will have been saddened to hear of the illness of Levi Washington last week and his consequent hospitalisation.
[1 image] END_OF_DOCUMENT_TOKEN_TO_BE_REPLACED

You can't fault Levi Washington for ambition: trying to release a new single every week against the background of organising so much live music ...
[1 image] END_OF_DOCUMENT_TOKEN_TO_BE_REPLACED

After the angst of last week when he agonised over the mix of "Carrie, Baby" until Wednesday & the existential angst of the preceding "Check 1, 2" ...
[1 image] END_OF_DOCUMENT_TOKEN_TO_BE_REPLACED