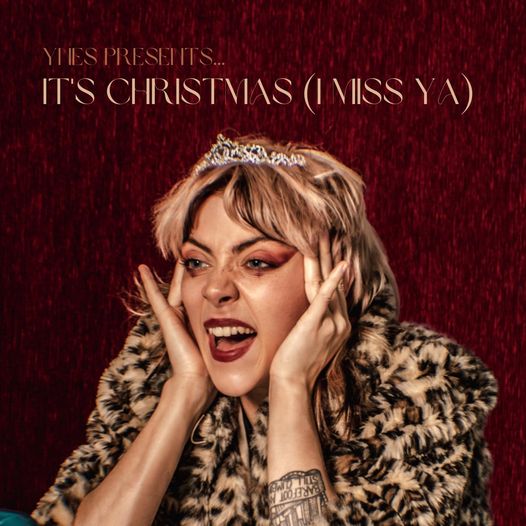 Only the other week I was reporting on the enthusiasm of John Rivers of Woodbine Studios for the work of YNES, and here I am, fortunate enough to share extra evidence of why he feels that way about her, with the release of her festive single "It's Christmas (I Miss Ya)".

It's hard for me in the confines of a review of a length that anyone would want to review to list all the things which I love about this song.

I know I start from a position where I like & admire her whole approach to what she does, so am probably pretty biased in her favour, but nevertheless, I think it would be hard not to warm to this song.

As I suspect I've hinted, I find Christmas singles difficult to review given the propensity of otherwise creative writers to insert multiple references to sleighbells, reindeer etc etc which by no means represent their or anyone listening's actual Yuletide experiences. There are far too many examples of what appear to be stock clichés hurled against a wall & then reassembled into a random order.

Based much closer to genuine life & at times almost uncomfortably personal (YNES does tend towards beating herself up a bit in some songs, including this one), thank goodness it actually RINGS TRUE (and I emphasise there are no bell effects in the arrangement).  In her own words "…dropped a Christmas song, so I can't slag off Paul McCartney anymore (I will)": yet this song is way more honest than Macca's effort, replete as it is with musical & lyrical clichés (the choir of children have practised all year long? I think not).

It swings along merrily in its own way (and I have to confess the rhythm sounds a bit like someone who's had a few drinks swaying & lurching along a slippery street: the song starts with her "sat outside the cathedral, cause where else would I be on Christmas Eve, drinking tinned cocktails  while families stare at me") and sounds deceptively simple.

However as with all her best songs, although there are sections where her tongue is in her cheek, and others where she is poking it out at the judgemental world, there is a true heart at the centre of the piece & that's ultimately what elevates her work & gains the respect of those who understand.

In between the moment of low self esteem, needing to "get a grip" and hoping for "balls of steel" for presents, fearing the potential embarrassment of turning up unannounced at the home of the object of her affections and balancing this with the need to get home "with my dignity intact", you can't actually get away from the fact that this is an achingly honest narrative of not yet requited love and the agonies of how to connect, set against the backdrop of the often suffocating social norms and expectations of Christmas. If this sort of thing is tricky through most of the year, the festive season just piles on the agonies.

Yet YNES retains a hope & optimism throughout which is key to the heart I mentioned. Whereas songs like "Fairytale of New York" are popular (rightly so) for portraying the dark side of the season, that is essentially a fictional tale. "It's Christmas (I Miss Ya)" seems true.

This has leapt with a single bound into my limited list of "Christmas songs I actually think are good and would play". If you wanted to list the best Christmas songs ever based upon originality & veracity plus emotional truth, then this is a contender. Whether or not mainstream media have the courage to go against the bland and insipid expectations of the genre, I doubt it: let's see who has the suss to play it. In the meantime, if you have a cosy Christmas song comfort zone, this may not be for you. If however you like your own expectations challenged & hearing something true & original, I urge it upon you. I'll be playing it & sharing it for sure.

"The Daily Male" by YNES

While YNES is preparing herself to play the Left Field Stage at Glastonbury at the specific invitation of its curator Billy Bragg, her brand new ...
[1 image] END_OF_DOCUMENT_TOKEN_TO_BE_REPLACED

Springing out of the blue somewhat is the new single from YNES called "God's Little Punching Bag" which burst onto our consciousness this ...
[1 image] END_OF_DOCUMENT_TOKEN_TO_BE_REPLACED

When reviewing the last YNES single (the eviscerating "Better Job", which also featured Ace Ambrose), among several adjectives I used, one was ...
[1 image] END_OF_DOCUMENT_TOKEN_TO_BE_REPLACED