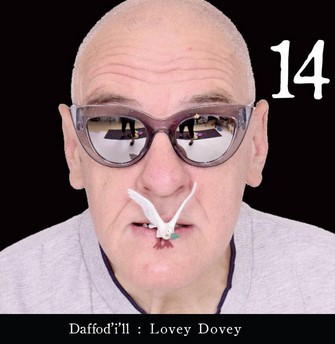 I think we can safely ascribe the title of number fourteen to his general philosophy & number fifteen is a tip of his cap to his day time (or rather night time) employers.

I don't know how well you are managing to keep up with this deluge of new music (I do fear on his behalf that people are simply not getting the chance to really listen to it all let alone dig deeper into it, so relentless is the pace of releases, which one seasoned Dill watcher and fan likened to me as him "making up for lost time") but I respect his personal need to keep creating and can assure you that if you find the time to explore these many songs, there are rewards available.

I'm sure by now, with so many reviews saying quite similar things, you'll appreciate the Daffod'i'll trademarks and patterns amongst the songs. Often quite oblique references to music he likes (both vintage and contemporary), idiosyncratic punning, references to America and its music,  spirituality, good cheer, bewilderment at the foolishness of the world and occasional eccentricity sufficiently far out to not just set us back on our heels but to defy any reviewer's capacity to adequately capture. Other patterns also may exist, though I'm not quite sure what they mean nor even if they really exist: for example all the tracks on volume fifteen have short punchy titles of no more than eight characters..

Electronica abounds, and most of the twenty tracks are clearly aimed at dancing. As usual, Dill seems insistent on continually shifting his vocal sound, often multiple times within the same song. This certainly adds variety between songs and textures within individual ones as does his continuing to add to his palette of instrumental sounds in the arrangements: he is getting very confident with more conventional piano and guitar parts as well as the more synthesised ones and now and again one is brought up by hearing something new such as a castanet in "Is It", one of the strongest tracks on ‘Lovey Dovey'.

Aside from that one, my favourite on the fourteenth instalment is "Tomorrow's Parties", the closing track. However, despite my enjoyment in what he has done in a sort of tribute to the Velvet Underground, he does stray into potentially difficult territory in his use of the title line to "All Tomorrow's Parties" in his song, along with the original melody line..

In terms of ‘G4s I Guess', again it's probably album closer "The Money" which most caught my attention with its strut and as the sense of lyrical intent is easiest to follow of these ten songs.

As regards an overview, as I have said, Daffod'i'll's first eight or so solo albums contained many interesting tracks but were really his finding his feet as a solo artist and experimenting with writing and using technology. Since then, the consistency of material has hit a higher level as confidence and accumulated experience has kicked in. However with these last two albums, I sense we have hit something of a plateau. Whereas he is clearly aiming for as much variety as possible, nevertheless I feel that in terms of new ideas, they are starting to be less clear: we are getting more variations on previously introduced themes and several tracks seemed similar to ones we'd heard before. I do think that now would be a good time to take stock, reflect on some significant artistic success and form a plan to introduce his music to a much wider audience. There have been a lot of worthy tracks, but few I fear have had the listens which many of the other songs reviewed in this magazine have. There have been more than sufficient strong Daffod'i'll songs released in 2021 alone to build a substantial following on, starting with the existing fanbase from his earlier bands and after a year of staggering output & creation, the next steps should be around consolidation & substantive impact.

Although after album number 34 ‘SAY AHHH!' from Daffod'i'll back in April he said he was taking a break from this deluge of ...
[1 image] END_OF_DOCUMENT_TOKEN_TO_BE_REPLACED

Today sees chapter 34 in Daffod'i'll's solo album series with the release of ‘SAY AHHH!' with its tracks being "Conquer All", ...
[1 image] END_OF_DOCUMENT_TOKEN_TO_BE_REPLACED

Eight days after my last Daffod'i'll review, here he is back with another album (just the one this time, although he apparently has another ...
[1 image] END_OF_DOCUMENT_TOKEN_TO_BE_REPLACED

In the four days since I reported on the release of the  last four Daffod'i'll albums, he's back with yet another four today.
[4 images] END_OF_DOCUMENT_TOKEN_TO_BE_REPLACED

After releasing three more albums about as many weeks ago, Daffod'i'll  is back with three more plus another compilation ('The Best ...
[4 images] END_OF_DOCUMENT_TOKEN_TO_BE_REPLACED