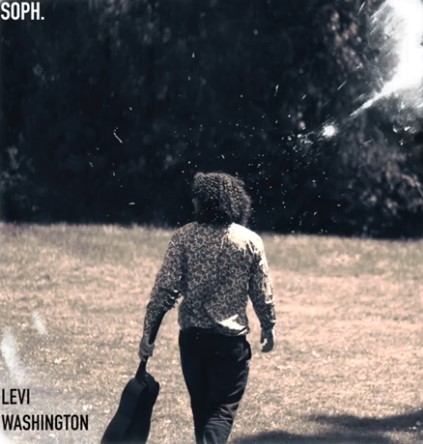 The main problem with trying to review the more prolific releasers of new music locally is actually keeping up with them. Although I knew in theory that Levi Washington was still sharing one a week, I hold my hands up & apologise to you for being a few days late in telling you about "Soph": in fact it presumably won't be long until her successor appears..

In fact the song was actually played on BBC Introducing for Coventry & Warwickshire some months ago, so you may well have heard it already, but now Levi has mastered it & given it a formal release.

If you've been attending to this campaign, you'll be aware of its defining characteristics. Put aside please (in my opinion anyway) the notion of this being a deliberate showcase for Levi to demonstrate the ease with which he can compose and perform in a wide range of genres (though he most certainly can): I consider that the truth is that he simply writes what's in his heart at any given moment & then applies the most suitable musical template to each composition: and he simply has a lot of musical interests & chops from which to select. What's important is that he sounds convincing in each genre and isn't just some sort of musical grandstander. I haven't yet come across any single in which he sounds less that fully sincere & that is a central part of his personal genius. Deeper down though, I wonder if he is stimulated by the challenges of playing in so many styles? Some artists do have this restlessness (Dave Pepper is a fine example) and almost motivational need to explore & express themselves diversely.

Unfortunately, I've struggled with "Soph"… while undeniably different in style to "My Own Way" , "Shelter", "Focus" and  "Polaroids of Yesteryear", I am not at all sure how to describe its style. Normally I hate labelling any music & until I started writing about it, didn't make much effort to do so. While those remain my principles, I do however accept that as a reviewer I do owe my readers some obligation to try & describe the music I'm reviewing to them.

Clearly addressing the person whose name provides the title, the song is gentle in tone but still too upbeat & jaunty to be called a ballad: it has strong pop credentials but the lyrics weave such a complex picture & the length of five minutes rather stretch what the op police normally permit: indeed one of the strengths of the song is that Levi holds our attention for so long.

I don't know how much "Soph" is modelled on an actual person: if not, he's certainly gone to considerable lengths to give details about her character and experiences. Given the level of concern & sympathy evinced, I'd be inclined to think that somewhere in there is someone he cares for.

It's another beautiful, catchy song & certainly the sort of track which deserves to be a single, irrespective of my limited ability to tell you what it sounds like. Perhaps you might go & have a listen yourself and then you'll be able to form your own opinion. It will not be a waster five minutes I can assure you.

It's back to business nearer usual for Levi Washington with the release of "Same Ole U".
[1 image] END_OF_DOCUMENT_TOKEN_TO_BE_REPLACED

It was grand indeed to catch up with Levi Washington live on Sunday on the Bandstand, but it's back to the weekly business as usual now with his ...
[1 image] END_OF_DOCUMENT_TOKEN_TO_BE_REPLACED

I was pleased to hear that Levi Washington is managing both his health issues & his rapidly expanding portfolio of commitments running live events ...
[1 image] END_OF_DOCUMENT_TOKEN_TO_BE_REPLACED

I'm sure many readers will have been saddened to hear of the illness of Levi Washington last week and his consequent hospitalisation.
[1 image] END_OF_DOCUMENT_TOKEN_TO_BE_REPLACED

You can't fault Levi Washington for ambition: trying to release a new single every week against the background of organising so much live music ...
[1 image] END_OF_DOCUMENT_TOKEN_TO_BE_REPLACED

After the angst of last week when he agonised over the mix of "Carrie, Baby" until Wednesday & the existential angst of the preceding "Check 1, 2" ...
[1 image] END_OF_DOCUMENT_TOKEN_TO_BE_REPLACED