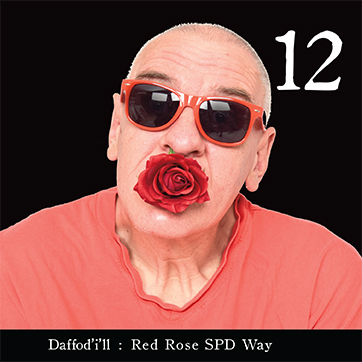 It is so difficult to keep up with the prolific form of Daffod'i'll that in the three weeks since I reviewed his eleventh solo album ‘Black Narcissus', he has shared a further two new ones: his twelfth ‘Red Rose SPD Way' and the baker's dozen ‘SMILE', so in order to try to stay abreast of all this music, I offer you here a joint review of the pair.

I can only assume that the former is some form of nod to the 1973 Wings album (it's the one which has "My Love" on it) and in hindsight, I wonder if I ought to have picked up on this earlier? The album in question of course features an image of Paul McCartney with a rose in his mouth  and pretty much all of the thirteen Daffod'i'll albums portray the artist with various blooms (and now fruit)  in his own. What the inspiration might be apart from visually is something to ponder over as musically his work sounds remarkably nothing like Wings and frankly ‘Red Rose Speedway' is not a particularly well regarded record.

It's a bit tricky trying to make sense of twenty tracks in one go, especially if you've had another thirty to process from the three albums which came out in the previous month and as there has been some interesting material amongst those fifty songs, I do fear that they are arriving with such a rush & then getting almost immediately superseded by others that they are not getting anywhere near the attention they merit. I have put this to Dill & I am sure he appreciates my argument, but such is his head of steam & desire to put these songs out after so many years of musical silence, that I think we have to respect his choices & try to keep up with him. In the meantime, I'm sharing one track per album (the ones I feel might have made good singles) on the "Hot Music Live Presents" Spotify playlists where I hope they may find a wider audience.

As noted on previous reviews, after a bit of a break from punning & multi-meaning titles, they are creeping back. I was immediately drawn to "Arti Nati" (on ‘SMILE') as it appears to bear some relationship to one of my favourite Gods Toys songs, the sadly never released "Arty Natty". In fact it appears to be a 21st century update of that song and it works exceedingly well as such. I've mentioned before that Dill writes reggae, especially the dubwise style well & I always feel a bit disappointed if one of these albums doesn't contain one in such a form (he never seems to do more than one per album at most. I've suggested that a dubwise compilation might be a good thing to try. At any rate, I loved this one & it's gone straight into the latest Spotify playlists for both HMLP and my own.

The other trademark inclusion tends to be a more overtly religious song, such as "Jerusalamb?" on ‘Red Rose SPD Way' with its interesting woodwind sounds. However on album twelve it's "Niburu" (which seems to relate to a 2012 "prediction" of a planet of such a name crashing into Earth)) which stands out for me & which consequently is representing that album on the playlists. Much stripped back compared with the other songs, piano-led and with the least treated vocal in the collection, it is an atmospheric and moving song which in an eerie coincidence vaguely reminded me of the work of Paradise of the Titans whose gig supporting Ian Todd at The Tin I reported on last week & at which I also bumped into Daffod'i'll himself….

"Bell End", (there may be a pun involved here too, but if so it's not really referenced overtly in the lyrics) is also less busy and if "Arti Nati" channels Gods Toys to a certain degree, then this song evokes memories of his follow-up group I.

As far as ‘SMILE' goes, the intent of the title pretty much speaks for itself though the opener, "Adolphia" with its chilling martial drumming and German lyrics is a pretty startling response to the challenges of raising a smile, taking on as it does the horrors of Nazism.

"Quire Boy" picks up from "Look!" in terms of Dill getting more and more comfortable with creating guitar based rock songs entirely by himself and is another favourite of mine on the album: had "Arti Nati" not trumped it, it would have been an easy winner.

I've picked out for you some possible starting points for you to hopefully access these two albums as they do stand out from the other tracks to some degree. That is not to say that the others are without merit. There is a great deal of exploration & experimentation going on across both records again with increasing confidence in deploying novel instrumentation from an artist known throughout his career as a frontman/singer only. There is a great deal of awareness of contemporary R&B and dance music and obviously a great deal of care and love has gone into each song. All of them require repeated listens to appreciate the finer detail though & given his release strategy, I fear this is what they are not getting enough of at present. Additionally, although Dill is spending a great deal of time & ingenuity in creating innovative vocal treatments, which usually vary throughout individual tracks, these work very effectively on the dance orientated songs, yet it's when he strips these back on the more intimate & personal songs that I think he is at his best: certainly his most heartfelt & effective.

When I saw him last week, he confirmed that he still has plans for live performances in 2022 which should bring these many new songs to a wider audience, which is what their merits & his efforts surely deserve.

Although after album number 34 ‘SAY AHHH!' from Daffod'i'll back in April he said he was taking a break from this deluge of ...
[1 image] END_OF_DOCUMENT_TOKEN_TO_BE_REPLACED

Today sees chapter 34 in Daffod'i'll's solo album series with the release of ‘SAY AHHH!' with its tracks being "Conquer All", ...
[1 image] END_OF_DOCUMENT_TOKEN_TO_BE_REPLACED

Eight days after my last Daffod'i'll review, here he is back with another album (just the one this time, although he apparently has another ...
[1 image] END_OF_DOCUMENT_TOKEN_TO_BE_REPLACED

In the four days since I reported on the release of the  last four Daffod'i'll albums, he's back with yet another four today.
[4 images] END_OF_DOCUMENT_TOKEN_TO_BE_REPLACED

After releasing three more albums about as many weeks ago, Daffod'i'll  is back with three more plus another compilation ('The Best ...
[4 images] END_OF_DOCUMENT_TOKEN_TO_BE_REPLACED