Ian Todd supported by Paradise of the Titans 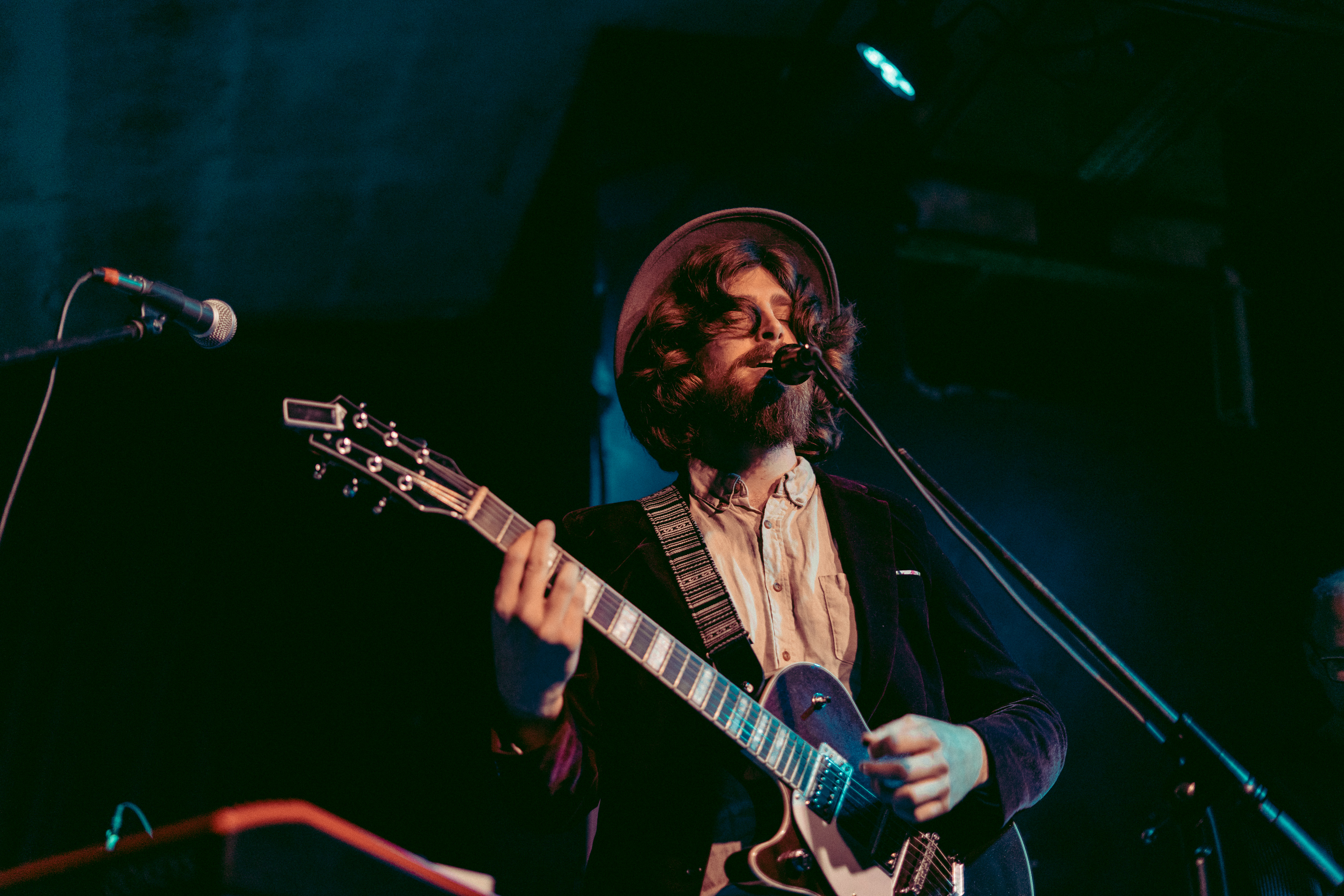 Sadly, my live reviews for 2020 & 2021 have been disproportionately outnumbered by my reviews of releases (and let's not forget the last word of this magazine's title), but I'm pleased that of those I've managed, they have all been of the very highest quality, which is good to report to you but also very pleasant if not therapeutic for me to experience.

The latest one was last night at the Tin (and my repeated thanks to the venue for ensuring such a safe space for live music in these times) and featured Ian Todd supported by Paradise of the Titans.

The latter act was previously unknown to me so I thank Ian for introducing me to them.  I have always enjoyed checking out support acts & discovered so many artists who became personal favourites that way: I've never understood those audiences who only enter the auditorium for the headline act. I say "them" as it seemed the appropriate pronoun for what appears to be a band, but really it's just singer/songwriter Alice Weston and I was hooked. This is an artist whose work I need to explore & whom I'd be very happy to see again.

I guess if you had to sum up the night in one word, you might go for the "immersive" tag which Ian uses of his own work, or perhaps "transfixed" as that's what I, and what was a very substantial audience, the most I've seen at the venue for a long time, were. Both acts attracted full & rapt attention and again it says much about the venue that they can provide an environment where artists can perform without distraction and the audience that they gave their full attention & respect all night.

Alice probably gets a lot of space analogy reviews: her music & stage dress certainly steer one that way, though as one of her significant songs is called "Mermaid", there is a big aquatic trip going on, so maybe the best description is non terrestrial. At any rate, Alice takes you on voyages to strange new lands with a magical stage act involving synth-pop sounds (plus a real floor tom), ethereal (and treated) vocals and a great deal of interpretative movement á la Kate Bush. It looked as great as it sounded & she has a charismatic presence on stage which no doubt contributed to the concentration of those watching. You could well imagine this act going down well in all sorts of sympathetic spaces.. I recommend you check out Paradise of the Titans at your earliest opportunity.

In terms of Ian's set, it was the inaugural live performance of his latest album 'Seven Signs of a Soul' (reviewed in this magazine in August: check it out at http://www.hotmusiclive.co.uk/article?article=13046)

The idea of playing whole albums in sequence is one which seems to be quietly growing, though I haven't seen too many myself (I think the last one I attended was when Buzzcocks played ‘Another Music in a Different Kitchen' and  ‘Love Bites' back to back in what the internet suggests was 2010), but with thematic collections such as this one which concerns itself (at least on one level) with signs of life, it works nicely.

Although the gig was not particularly branded as a launch, given the time it's been out, it is the only time so far it's had its songs performed, and given the stellar lineup Ian assembled to play it (John Parker on double bass,  Kirk Hastings on saxophone (neither strangers to this magazine) & Matt Rheeston playing drums), the possibility of further gigs soon must be low: all of which of course adds to the special feel of the evening.  It also was an opportunity for Ian not only to sell a wondrous range of merch, including customised phone cases & his original artwork, but the night was designed to help crowdfund a vinyl edition.

Excitingly too, Matt Cotterill was present to record the evening, so the possibilities from the products of that exercise are tantalising.

A recurring problem I have with describing live performances as transcending their recorded form is that I always fear that this implies that the latter might in some way be of a lower quality… so once again I find myself emphasising that the album was great (I told you so at the time) but this performance took the songs into new & spectacular places. The band were really tight and clearly enjoying themselves tremendously (they can't have had much rehearsal time which makes t even more outstanding) and the interpretations of the tracks were to me revelatory. Fortunately I was able to run past fellow audience member & merch vendor Sophie Hadlum (who of course plays in Shanghai Hostage with Ian) my perception that tempos were subtly different from the originals and she seemed to support that. Faster passages bounced & sizzled and slower movements were more drawn out, making absolute added value of space.

Ian tends to self describe this music as "immersive experimental art-rock and Neo-psychedelia" and I respect that. However, as all my reviews of his work have said, this does not equate to "difficult to listen to avant garde". This is catchy, accessible music, albeit with unorthodox and imaginative elements (John was telling me how much he had enjoyed responding as a musician to the challenges of unusual song structures).

In my album review, I suggested some similarities between album opener "Movement Towards Motion" and the Velvet Underground's "The Black Angel's Death Song", a comparison I probably still stand by, though not one I would use in relation to what I heard last night. Perhaps understandably, given the band, the characteristic sound was much more towards jazz and this was another aspect of how the gig allowed the music to be reinterpreted anew.

The other tracks were of course (assuming you have the album or read my review) the two taster singles "Don't Forget To Breathe"  and "What Goes In Is What Goes Out" plus "Sense of Sensitivity", "Grow", "Made Yourself To Be" and "Feed the Good Self", the last of which I think would make a really strong single.

If all this praise makes you want to see Ian & his band live yourselves, don't worry. He assures me that this is not a one off performance & that they hope to play together for you in the new year.

The deeper themes of "Seven Signs of a Soul" include "mental wellbeing, stoicism and anti-consumerism' and I think I'm confident that the experience of the album contributed to the first of these for those present: which is also a good opportunity to credit Ian Whitehead for the excellent sound all evening which helped such a process & facilitated the immersive aspect.

Many thanks too to Emilié Cotterill of Transluceo photography whose many great shots of Ian can be found on his Facebook page for her permission to use some of her stunning photos from last night for this review: they do the evening & music  justice  in ways anything I might have tried could not have.

As prophesised in our recent reviews of his singles "Don't Forget To Breathe" (in June) and "What Goes In Is What Goes Out" (last month), the ...
[1 image] END_OF_DOCUMENT_TOKEN_TO_BE_REPLACED

The time is rapidly approaching (16th of July to be precise) when "What Goes in is What Goes Out", the sophomore single from his ‘Seven Signs of a ...
[2 images] END_OF_DOCUMENT_TOKEN_TO_BE_REPLACED

Having reviewed "Hour Glass" (an hour long ambient piece ) by Ian Todd last summer, I am now pleased to say that I can return to his work again, this ...
[2 images] END_OF_DOCUMENT_TOKEN_TO_BE_REPLACED

Keen readers of this magazine will recollect the February feature  of Ian Todd & even keener ones will have spotted his name amongst the details of ...
[1 image] END_OF_DOCUMENT_TOKEN_TO_BE_REPLACED

We cover so many multi-talented artists in "Hot Music Live": not just musicians but the photographers, visual artists & producers whom they work with.
[1 image] END_OF_DOCUMENT_TOKEN_TO_BE_REPLACED

As I've got out more in recent weeks to see live music again, I've been most fortunate to catch some artists whose reputations were made in ...
[9 images] END_OF_DOCUMENT_TOKEN_TO_BE_REPLACED

As anticipated in my interview with Bid last month, yesterday evening saw a magnificent gig at the Tin with the Monochrome Set being supported by The ...
[6 images] END_OF_DOCUMENT_TOKEN_TO_BE_REPLACED