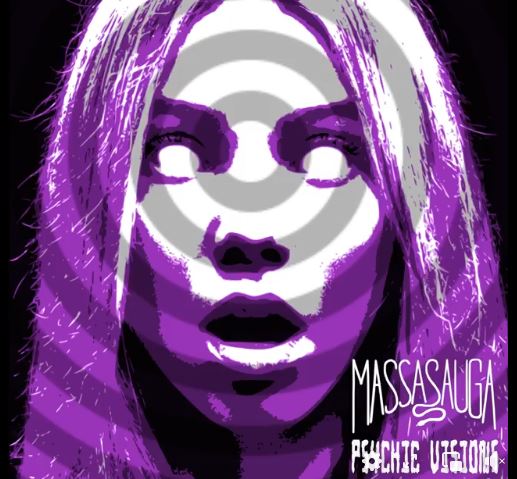 Way back in the day, Hallowe'en was a rather different sort of festival, a sort of development of the pagan Samhain harvest festival but embracing the memory of the dead. Today it's not just become secularised but heavily commercialised with heavy pumpkin iconography, though in other parts of the world, observances such as the Día de Muertos retain senses of the genuine macabre. It's hard to imagine most Hallowe'en celebrants not freaking out if the dead returned to walk the earth.

Thankfully, Massasauga have decided to inject a renewed sense of the scary back into the day with today's release of  their "Psychic Visions" single. Of course the band habituate such territory all year round: consider if you will their "7 Nights of Terror" earlier this year or their most recent single "10-46"  dealing with the unsolved murder of Artemus Ogletree  (yes, really) in Kansas City in 1935.

The first release to feature new drummer Adam Stewart (and the track has its roots in a jam before he actually joined up properly), the song thankfully avoids pumpkins, ghosts looking like sheets etc and instead heads for the genuinely frightening territory closer to the Día de Muertos and Baron Samedi.

Personally I'd be quaking more than a little in visiting a shaman of the sort cited in the song, let alone submitting to their rituals: taking some hallucinogenic trip to somewhere completely different.  And that somewhere different seems a way further south than Kansas City. If that song had an American Gothic underbelly, then this time we are talking voodoo territory. There is an unsettling quality which may be due to some sort of drug, but there is also a true malevolence lurking in the shadows: a quality which previous Hallowe'en specials such as the "Monster Mash" didn't even begin to channel.

To be fair, there isn't much of the New Orleans musical gumbo in the sound, despite the subject matter: I suppose if you'd sent Black Sabbath to that city in 1968 with an ample supply of the appropriate substances, then you might end up with this sort of end result: a very riff driven, heavy track filtered through some groovy media and with the vocals apparently beamed in from outer space: in fact on reflection, Hawkwind comparisons might also apply a bit. Whatever else you might come up with though, you'd never guess this was a Coventry band..

Massasauga are a unique band who have already not only carved out their own unmistakeable space in our local music scene but even more commendably have managed to forge a trademark sound while still releasing songs which sound different to each other: it's a difficult compromise and a great many, even very successful artists don't always manage to pull it off. It also gives us thankfully one more decent song to play at Hallowe'en: there are so few that it's good to have another option.

Out at 1800 today was the long awaited EP by Massasauga, ‘Exorcisms and Psychic Visions'  which is also a compendium of most of their recent ...
[1 image] END_OF_DOCUMENT_TOKEN_TO_BE_REPLACED

Out today at 8 pm is the new Massasauga single, with the sort of title you have come to expect from this band with a penchant for the darker side of ...
[1 image] END_OF_DOCUMENT_TOKEN_TO_BE_REPLACED

One of my favourite movies by Steven Spielberg, has always been "Duel": unfortunately as it was his 1971 feature length debut, it has been grievously ...
[1 image] END_OF_DOCUMENT_TOKEN_TO_BE_REPLACED

It was back in April when out of their "7 Nights of Terror" competition, Massasauga fans voted the chilling "Switchblade" to be their single.
[1 image] END_OF_DOCUMENT_TOKEN_TO_BE_REPLACED

You may remember when back in February Massasauga invited you to participate in their "7 Nights of Terror" wherein they shared teasers of seven songs ...
[1 image] END_OF_DOCUMENT_TOKEN_TO_BE_REPLACED