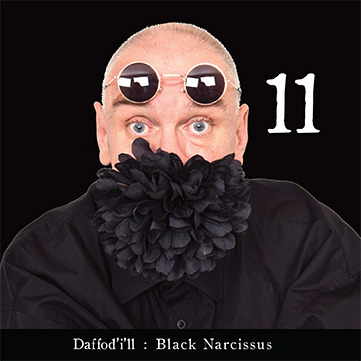 Extremely hot on the heels of Daffod'i'll's tenth solo album ‘Brown Nosey' (which I reviewed at the end of September) comes number eleven, namely 'Black Narcissus'. Since ‘Brown Nosey' itself closely followed ‘I Stripped Bare', it would seem that he is not only growing more and more comfortable in the skin of a solo artist, as I have said in relation to each of those two records, but it is stimulating his creativity to great effect (I understand that he has more material under development too).

The album certainly starts in quite a startling fashion:  opener "All" is by far the most rock orientated song so far released over this growing series and though pretty contemporary in its keyboard & vocal sounds, harks back to punkier days with some strident guitar sounds and very prominent drums/percussion before evolving off into one of the more eastern sounding directions which have cropped up over these albums. Sonically, one of his best, not least because it does grab & hold your attention.

It's followed by its near namesake "All I Buy" which sees a return of the fabled Daffod'I'll humour in which, to a jaunty tune, he adopts a "cheeky chappy" persona in the tradition of say Anthony Newley, Steve Marriott or Damon Albarn.

"Baby Don't Go!" actually surpasses my capacity to describe: a heavy rhythmic track, the vocals are, for much of the song, either in a language I neither understand nor even recognise or maybe one of his own invention. Unless he's singing in tongues? One for you to decide for yourselves..

"City of Gold", as the title does signal, is one of Dill's more overt religious songs, a pleasant & gentle glide towards Heaven.  "Fan Ta See" takes us back to the sort of punning song titles so frequent on the earlier albums yet less prevalent on the last couple. Since the sound reverts on that of the ones towards the start of the sequence, I wonder if it's an older song?

The second half of the album (back in the days of vinyl, I suppose that this would start Side Two) and "Hold You" is another surprise: a sort of soul ballad and quite unlike anything Daffod'I'll has tried before…. Another to his credit.

"How Can I Explain" follows fairly naturally and shares its predecessor in terms of some recitative vocalisation (among the multiple styles present on the track: one of which is definitely a "new" approach and well worth exploring further).

"On Fire!" dips into more vocal experimentation: successfully I think and is another of those which is sufficiently bizarre in conception to defy easy description. That is not to say however that it's inaccessible: quite the opposite. This odd track is more of the most compelling & possible one which might make an effective single.

‘Black Narcissus' concludes with "Testament" and "The End of the Road", the former again similar to tracks on previous albums and the latter one of those songs which Daffod'I'll has been using as final tracks to set forth his personal values & manifesto.

Despite his prolixity and the speed with which these albums are coming out (I'm not sure how much each one can sink in with even his most devote fans before its successor drops), 'Black Narcissus' holds up well in terms of imagination and fresh creativity, as with the two previous ones. There are many of his strongest tracks on it, but they do need people to hear them & appreciate them. Since I gather his twelfth one is ready to go already, my main fear is that 'Black Narcissus' will get unfairly overlooked and too swiftly forgotten: it deserves better. My advice to the artist is definitely around managing his obvious creative spurt and excitement at sharing new music and give each album time & room to breathe & get noticed: these tracks would need airplay, liver performances (when possible) and maybe adding to playlists to increase their profile.

Although after album number 34 ‘SAY AHHH!' from Daffod'i'll back in April he said he was taking a break from this deluge of ...
[1 image] END_OF_DOCUMENT_TOKEN_TO_BE_REPLACED

Today sees chapter 34 in Daffod'i'll's solo album series with the release of ‘SAY AHHH!' with its tracks being "Conquer All", ...
[1 image] END_OF_DOCUMENT_TOKEN_TO_BE_REPLACED

Eight days after my last Daffod'i'll review, here he is back with another album (just the one this time, although he apparently has another ...
[1 image] END_OF_DOCUMENT_TOKEN_TO_BE_REPLACED

In the four days since I reported on the release of the  last four Daffod'i'll albums, he's back with yet another four today.
[4 images] END_OF_DOCUMENT_TOKEN_TO_BE_REPLACED

After releasing three more albums about as many weeks ago, Daffod'i'll  is back with three more plus another compilation ('The Best ...
[4 images] END_OF_DOCUMENT_TOKEN_TO_BE_REPLACED