‘After the Fire' by Blue Moon Birds


‘After the Fire' by Blue Moon Birds 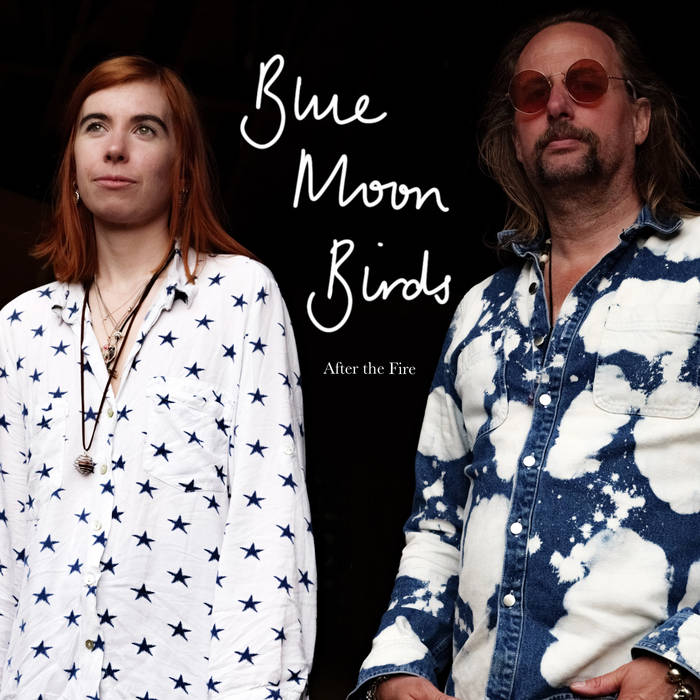 I hope that you enjoyed the Maz Corry song "In This Living" on ‘Hot Music Live Presents Volume Five'?  I'd like to think that you also read my review (back in January) of its original home on her album ‘Postcards Home'?

If so, you may have noticed that she created that record with the (necessarily remote at that time) help of Simon Kemp.

Now, the two of them have decided that since they are for all intents and purposes a functioning writing and performing duo, that they ought to release their music under a collective name. Hence, though Maz tells me that they consider ‘Postcards Home' to be their debut (despite coming out solely under her name), for its follow-up, ‘After the Fire' (now available for your pleasure) they have decided on the name Blue Moon Birds.

The genesis of this collection of ten new original songs cannot be more different to its predecessor. This one was forged in true folk organic style by following in the illustrious footsteps of Traffic and Led Zeppelin (please don't argue with me that the latter weren't a folk band because they were in my opinion) and "getting it together in the country": composing and recording at Mellowcroft (great name) in Wales over four days with power from a generator as it's not on any grid.

You can imagine the impact of such an intense and rootsy approach on the quality and tone of the outcoming music and as such it certainly offers a distinct complement to their previous set. Equally, the concentrated window of composition gives the whole a freshness comparable to the dew I imagine their encountering on the adjacent mountainsides each morning.

The space they worked in has excellent acoustics and while all the album sounds like it was recorded with as live and spontaneous set up as possible, one track in particular they nailed in a single fully live take. (To be honest I was intending to leave it up to you to see if you could hear which one it might be, but since they've indicated that it was "More Than I Could Dare to Dream Of" on the album, that isn't much of a challenge….)

Interestingly, that track sits in the middle of the album, which perhaps makes sense as it is a very gentle and uber-ethereal one, but what makes it particularly impressive is how they had the confidence to go for this one for the purely live take: it's restrained to perhaps the most I've ever heard a song being restrained: as it progresses, expected notes are delivered later and later than our expectations and I really admire their trust in each other to do this… every moment has the potential for the fragility of the song to break completely and this tension adds much to the superb overall effect. Maz sings not just languorously, but from such an apparent distance that you might imagine she was up the mountain for the performance.

Generally, the trademarks of approach noticeable on ‘Postcards Home' characterise this new collection also. The previously mentioned etherealness, haunting melodies and so much space you could hardly believe. Given their admirable commitment to minimalism and allowing what they do to resonate the more through lack of drowning in extra instruments or production, you might think defining the sound would be tricky, but there is sufficient evidence to confirm their folk and blues roots and I do appreciate how (for example) they can fully evoke the latter with just brief licks. Classy stuff delivered by virtuoso performances.

The other tracks, not being live, tend to indicate why they were not so by extra instrumentation dubbed on : as you might imagine, not one note more than they felt the track called for, so which if they are relatively fuller than "More Than I Could Dare to Dream Of" , it's only a marginal degree so. "Like Lovers Should" even features a guest in the form of James Schofield to form an exquisite duet.

To introduce the rest of the album, the tracks are called  "The River Song", "Sleepless Nights", "Phantom", "Hold On To Hope", "The Way That  You Love", "Paradise", "Hold Out Your Hand" and "Lily's Song".

I have no idea if the band are contemplating a single, nor which might get selected for radio play, but I have an inkling that "Phantom" might be worthy of a selection: again it's very sparse but grooves along in a sultry fashion with Maz's excellent vocals sit atop of little more than a "Come Together" sort of New Orleans bassline and some percussion.

"Paradise" in contrast is much more jazz inflected (with Maz apparently overdubbing extra vocal harmonies) and adds to what the previous album had already showed to us: they may love folk and blues but are quite happy to explore other waters and in a collection this size, the variety strengthens the whole as a listening experience ("Hold Out Your Hand" is pure country)

That said, as I played the album, I was thinking to myself about how I'd envisage myself (or any other potential listener) experiencing this music in order to get the most out of it. I'd personally like to hear it live, but under the strict proviso that it was in an intimate setting with as much insulation as possible from talking, glasses chinking etc. You really don't need distractions from getting the maximum immersion in this tranquil music. At home, again it's an intimate set of pieces: both in terms of the music which I've already tried to describe for you, but also in the nature of the words. Best to play it by yourself when all is quiet or even better with the company of someone dear to you.

I used the adjective "exquisite" above and as a rule I try to avoid repeating descriptions in a single review, but I think in this case the word can apply to the whole of ‘After the Fire'. Maz & Simon have crafted a really strong collection (I admire how they created some many high quality tracks in such a short space of time, especially when these days the EP seems the go to length of multi track releases) and it thoroughly deserves your close attention: and if you see the name Blue Moon Birds (hopefully) playing live near you, you won't now have to blink in incomprehension but you'll have some idea of what you'll hear if you pop along.