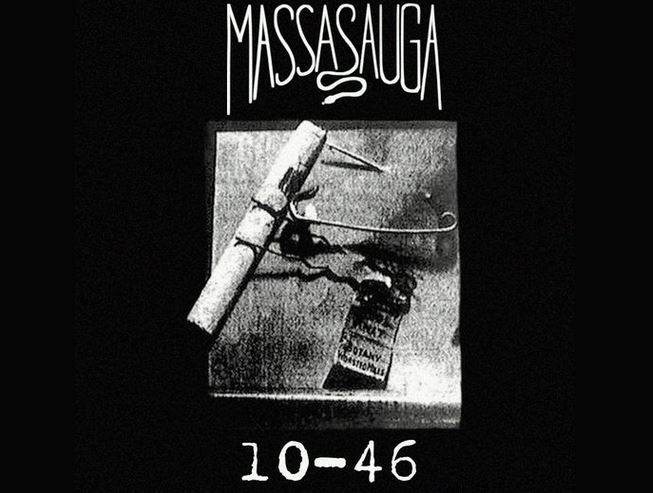 It was back in April when out of their "7 Nights of Terror" competition, Massasauga fans voted the chilling "Switchblade" to be their single. Now they are back with Hallowe'en starting to loom on the radar with another tale to chill us, namely "10-46".

It's interesting, and a sign of the depth of the material they are writing, that this is a brand new song rather than turning to one of other excellent ones which featured in the contest.

Based on a perfectly true story, that of the wonderfully named Artemus Ogletree who was murdered in the room whose number gives the single its title, in the Hotel President in Kansas City in 1935, the song not only tells what it can of a complicated & puzzling unsolved slaying, but perhaps more importantly, tries to capture its atmosphere. For the many details which accompany the case, I refer you to Wikipedia. The cover of the release however is a genuine crime scene photo.

Despite fitting so easily into the band's body of work, "10-46" is in fact something of a watershed release, marking the beginning of a new era being their first recorded professionally in a studio, and the end of another, being the last of this Massasauga configuration. Expect news of a new drummer soon..

The good news is that going into a studio has in no way diminished the power of the band's music and it has emerged as dirty & rough edged as their fans would expect: in fact if anything some aspects of the sound are muddier than previously (presumably reflecting what they were going for in trying to capture the uncertainties and unknown elements of the story): I was grateful for the lyrics provided in the video:

as they were not entirely clear first time without seeing them. The overall sound approaches grunge to some extent as the vocals dip into the stew of anguished noise & hide there from the ominous approach of the Grim Reaper (the continual repetition of "It's Coming" is eerily unsettling). Where the band perhaps differ from the actual history is that they place the events within some much bigger picture: their take on it is one of a much more primeval sense of evil, one which has waited "a thousand years" to slaughter the unfortunate Ogletree. Taken at this level, the more than four minutes of mounting terror reaches new heights of horror: exacerbated by the slow & steady tempo whose brilliant slow build is superbly constructed: anything faster would seriously have diminished the atmospheric impact. Presumably the poor man met his end in some prosaic way which knowing would also remove the power of the narrative: suggesting that he was the victim of some timeless and possibly immortal power makes for a much more gripping one.

Massasauga do seem to be going from strength to strength with each release & for a duo they strike a very effective balance between generating an awful lot of racket with so few instruments with not overdoing it, factoring in the power of tension created by restraint. And beyond all that analysis, the track is simply a very compelling one which is going to stick in your minds & refuse to leave.. which is another macabre story in itself I guess.

Out at 1800 today was the long awaited EP by Massasauga, ‘Exorcisms and Psychic Visions'  which is also a compendium of most of their recent ...
[1 image] END_OF_DOCUMENT_TOKEN_TO_BE_REPLACED

Out today at 8 pm is the new Massasauga single, with the sort of title you have come to expect from this band with a penchant for the darker side of ...
[1 image] END_OF_DOCUMENT_TOKEN_TO_BE_REPLACED

One of my favourite movies by Steven Spielberg, has always been "Duel": unfortunately as it was his 1971 feature length debut, it has been grievously ...
[1 image] END_OF_DOCUMENT_TOKEN_TO_BE_REPLACED

Way back in the day, Hallowe'en was a rather different sort of festival, a sort of development of the pagan Samhain harvest festival but ...
[1 image] END_OF_DOCUMENT_TOKEN_TO_BE_REPLACED

You may remember when back in February Massasauga invited you to participate in their "7 Nights of Terror" wherein they shared teasers of seven songs ...
[1 image] END_OF_DOCUMENT_TOKEN_TO_BE_REPLACED