The 'Hauntings' EP by Year Without A Summer


The 'Hauntings' EP by Year Without A Summer 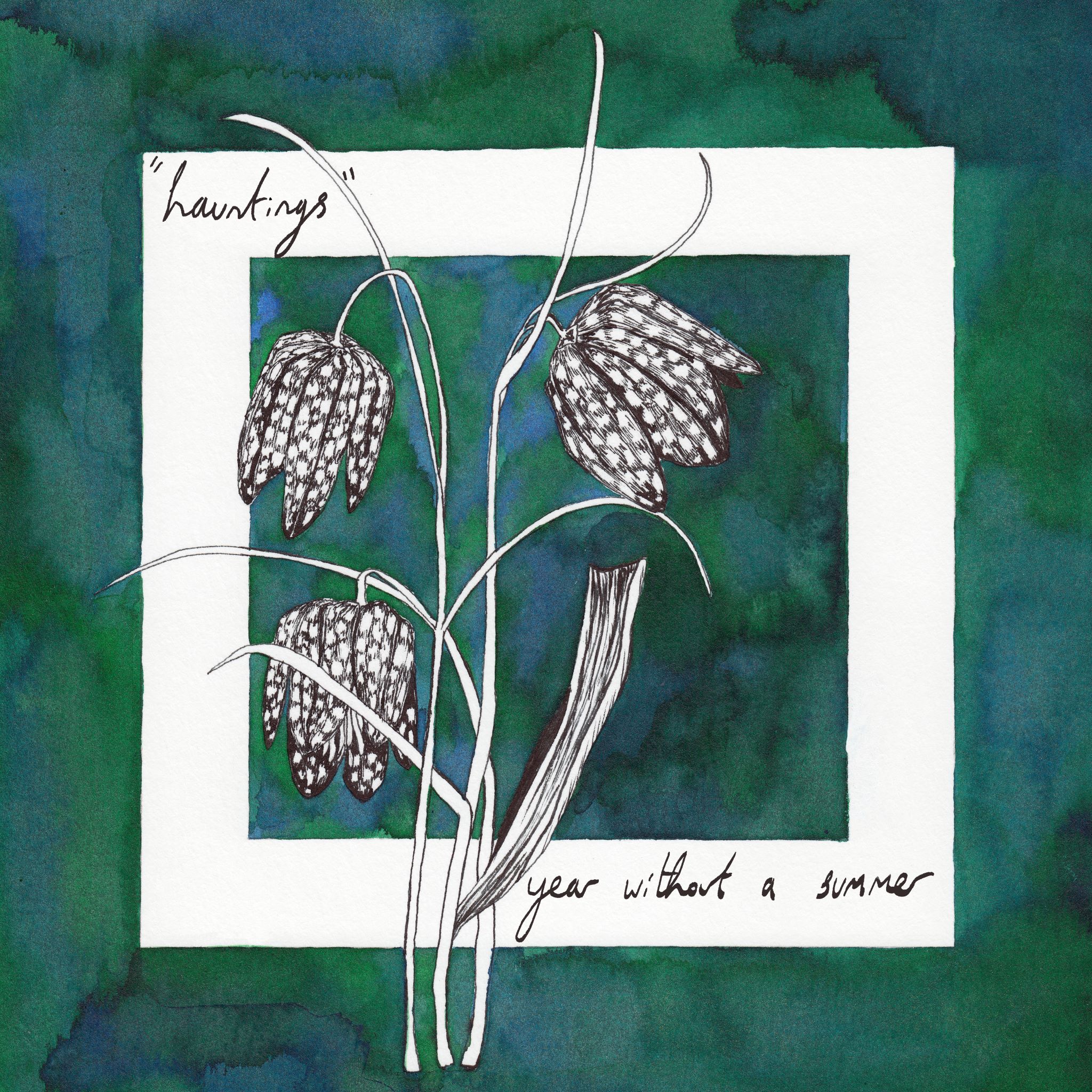 It's been nearly a year since we last reviewed a Year Without A Summer  release in these pages (and the last couple of years have come close to living up to the band's name) when we told you about their single "What You Taught Me (Baby)".

It's unusual to use a plural pronoun about the band as it is generally thought of as a solo project for Joe Wilson (and indeed the last single featured only his talent) but despite all the music on the new ‘Hauntings' EP (their eighth release) which comes out on 10th September being as lockdown generated as "What You Taught Me (Baby)", this time round he is joined by no fewer than four collaborators, though in fact each of them recorded separately in the safety of their own premises. Tenor sax and bass clarinet player Bill Cameron and drummer/percussionist Chloe Lynch are names you should be able to find in previous "Hot Music Live" articles, though I'm not sure we have mentioned flautist Emma Cwyps Cooper nor trumpeter Melissa Reardon until today. Joe himself sings and plays guitars, bass, percussion and glockenspiel.  He also mixed and produced the songs (as well as writing them) while Micky Ciccone played his part in the separate recordings from Coventry, London and Warwickshire.

So have Year Without A Summer evolved into a full band: what some unimaginative ones might call a "proper" band? Well no, not really. Joe has always added layers of sound (by himself) to songs just as far as he wanted to do to fulfil the track as heard in his head, so it's not true to say that ‘Hauntings' displays a particularly "fuller" set of arrangements: most are as sparse as his songs in the past. The difference is limited to the novelty of the particular instruments added this time around (all of which are acoustic): presumably ones he can't play himself.

EP opener "Spoopy!" is pretty essential YWAS and instantly enriches their canon moving things another jump forwards. What Joe refers to as "..usual jittery anxiety about everything…" is there in spades (he sounds on this one as David Byrne might sound if he lived in Coventry) with the trademark outpouring of words (I have often speculated as to how he not only fits so many lyrics to the music but how on earth he gets them all out so coherently in singing) over a characteristically paranoid arrangement. You might perhaps consider it the outpourings of someone on medication except that he explicitly rules this out in the lyrics… There is, as the title hints, (as well as presumably a bit of wordplay associated with the EP title) some sort of scatological subtext going on (he has "a head full of sewage") which rears its head periodically, but what I think sells "Spoopy!" best is its sheer vivacity: you could easily dance to the song and there is a strange joyousness to the predicament which adds to its oddness. Most intriguing of all is a marvellous trumpet part which gradually asserts itself through the tune, offering a calm counterpoint to the other elements. This song has already had airplay too…..

"Fly-Tipped Mattress" slows the beat right down and if anything is even better than its predecessor. This time it's a flute which adds the extra flavour and makes it all sound a bit late 60s ish underground in style. The main thrust of the song (whose lyrics also supply the EP title) is a sort of bluesy alternative rock one embellished with a sort of Lou Reed sleaze effect (think "Vicious" maybe). Marvellous stuff which I imagine will go down a storm if & when played live. This one too really deserves airplay and maybe a single release?

"Angels at Twilight", which follows, turns the pace down still further and is in complete contrast to what passed before, being an exquisite guitar instrumental and I suppose highlighting Joe's breadth of interest and talents. I can also see how in its own wordless way, it manages to convey a sense of the EP's title, but given the intensity of the other three tracks, maybe this one supplies the greatest surprise of all. It certainly also acts well structurally in giving us a pause to catch our breath between the angst either side of it.

"Decisions Decisions Decisions" closes the EP with a neat bookend complement to "Spoopy!", bringing back the anxieties, which this time round have moved on from the paranoia of feeling trapped in a small space to more global ones of trying to chart a course through the waters of life while being bombarded by input from media of various perspectives and degrees of reliability. Emma's flute is back, offering the complementary voice of calm and reason while Bill's sax vacillates between taking sides with Joe's yelps of stress and harmonising with the flute part.

Joe is terribly worried that he has made some sort of mistake but (perhaps through the reassurance of the flute & sax etc?), thankfully he ends on an optimistic note when "..the sun will shine on you".

If you have never heard a Year Without A Summer record before, this EP could be a useful entry point. In only four tracks there are many of the characteristics to be found on the earlier seven releases: an organic low-fi approach which offers a great deal of authenticity and truth, edgy and barbed music with highly thoughtful and literate lyrics and strange and rather wonderful juxtapositions and dialectics. A lot therefore to engage the mind, yet there is always a pop sensibility at play, most songs are danceable (at least for better dancers than me) and most stick readily in the mind. Little magical details encrust most tracks. There is also (possibly) a thematic continuation with earlier concerns such as 2016's "Ghosthunting with the Happy Mondays" The only thing which seems to be missing are the moths, though perhaps I've just not discovered them yet.

Where ‘Hauntings' perhaps differs from its predecessors, apart from the developed instrumental palette is that in this case, the  world we all inhabit manages to elide with that in which Joe's interior dialogues take place. COVID19 is not explicitly cited, but it's hard not to equate communal feelings of anxiety with those being expressed here, even if only partially. Year Without a Summer I think by choice inhabit a plane of their/his own and though the songs don't always indicate a happiness with that state of affairs, nonetheless it seems something he/they can live with. It's nice however that with this EP, the planes have aligned a little.

"What You Taught Me (Baby)" by Year Without A Summer

'Hindsight' by Year Without a Summer

Thankfully despite the complete lull in gigs to review, the flow of releases continues (though I suspect we are going to reach a point when material ...
[1 image] END_OF_DOCUMENT_TOKEN_TO_BE_REPLACED