"Polaroids of Yesteryear" by Levi Washington


"Polaroids of Yesteryear" by Levi Washington 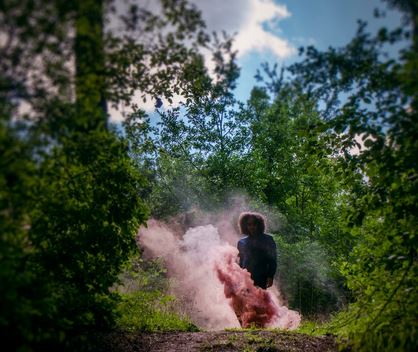 To say that I was stunned by the new Levi Washington single "Polaroids of Yesteryear" (which you can hear at 1800 tomorrow, the first of September, on BBC CWR I understand: Levi will also be talking to Rachel New about it) would be a massive understatement.  It grabbed me in the first few bars and held me tight for the duration of the first play and the several subsequent ones I made before tearing me away to try to channel my enthusiasm into a coherent review.

One of my very few rules which I try to deploy to rein in my tendency to rave about tracks I actually like, is to be very cautious about dubbing new songs as "the best" of any artist, although to be fair, most, if not all, of the artists I write about are very much ones who move their craft forwards each time, so maybe I could use the expression more than I do.

In this case however, despite Levi's very distinguished and high quality back catalogue, I think I might risk saying it. It really is that good.

And it's entirely his own work which is even more impressive when you hear the depth & complexity of the arrangement.

This is a wonderfully confident yet intimate track. In terms of the sound and the song, they are in perfect harmony. Not only does it impact instantly by just what you hear, but it's a really well constructed piece: what a sometimes call a "proper song". It says something worth listening to.

Based around the theme of romantic nostalgia (it was inspired by bumping into an old flame by chance), the overall feel is definitely a soulful one, yet the initial musical touchstones were apparently  ones involving artists such as the Smiths and the Cure. Hearing the very English guitar jangles, I  certainly get that, but even more so than the fact of the playing style I think Levi draws senses of understated intensity in the words: a lightness of lyrics which nevertheless suggest subtly that there is a far greater depth of feelings under their surface than the speaker feels he dare express. At every turn there lurks that cloak of humour which writers like Morrissey and Robert Smith used so effectively to partially conceal a passion. Whether or not Aztec Camera or New Order also played any part in the inspiration, I do not know, but parts of the song brought them to mind too.

However that is only a starting point: the sound itself is 2021 not 1982 and as I say, there is a soul element added which neither of the two previously mentioned bands ever went for. "Polaroids of Yesteryear" grooves.

Set against the rather jaunty guitar playing (and interestingly 80s sounding drums which are also courtesy of Levi as getting a drummer during lockdown was predictably problematic) he was also going for a "British rainy day romance feel": an interesting juxtaposition which creates a useful internal tension. I suppose that this too is a quintessential English songwriting  tradition: it makes me think of Ray Davies, though not of any particular song, and to some extent that beautiful if under rated Madness song "The Sun & the Rain", though that's not about romance as such. I suppose there are reasons why English song writers might go down that route from time to time, though not as often as might be the case. I think only an English writer would use the word "Yesteryear" too (though many examples of the French equivalents exist) and one of the very many delights of Levi's writing is his vocabulary, confidence in using it and ability to weave unusual words and phrases into songs and, tellingly, to do so convincingly.

However, digressions into setting this brand new song into its historical context aside, this is a corking song. You'll love it when you hear and it obviously is starting its airplay career already. Whether or not its roots etc are of any interest to you or not (I imagine such things are of greater moment to musicians and reviewers), it really does not matter, as  "Polaroids of Yesteryear" can speak for itself. More people I suspect will tune into the idea of memories of past relationships and shed a little tear for how well Levi evokes them (and he does: the track reeks of sincerity) than ponder about the various homages to his heroes included, though they are there too, and can act as either an alternative way of enjoying it or even better as different but complementary layers of pleasure and appreciation.

It's back to business nearer usual for Levi Washington with the release of "Same Ole U".
[1 image] END_OF_DOCUMENT_TOKEN_TO_BE_REPLACED

It was grand indeed to catch up with Levi Washington live on Sunday on the Bandstand, but it's back to the weekly business as usual now with his ...
[1 image] END_OF_DOCUMENT_TOKEN_TO_BE_REPLACED

I was pleased to hear that Levi Washington is managing both his health issues & his rapidly expanding portfolio of commitments running live events ...
[1 image] END_OF_DOCUMENT_TOKEN_TO_BE_REPLACED

I'm sure many readers will have been saddened to hear of the illness of Levi Washington last week and his consequent hospitalisation.
[1 image] END_OF_DOCUMENT_TOKEN_TO_BE_REPLACED

You can't fault Levi Washington for ambition: trying to release a new single every week against the background of organising so much live music ...
[1 image] END_OF_DOCUMENT_TOKEN_TO_BE_REPLACED

After the angst of last week when he agonised over the mix of "Carrie, Baby" until Wednesday & the existential angst of the preceding "Check 1, 2" ...
[1 image] END_OF_DOCUMENT_TOKEN_TO_BE_REPLACED