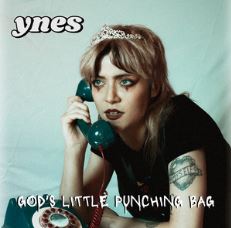 Springing out of the blue somewhat is the new single from YNES called "God's Little Punching Bag" which burst onto our consciousness this morning. Surprises often add an edge to the quality of the track concerned, though with this song, there is scarcely any room for additional edge. YNES is one of those artists we are blessed with locally at the moment whose work moves demonstrably from strength to even greater strength and this alone proves the point in her case. It's magnificent and though reviewers can be a bit prone to calling a song an artist's "best to date" ( I try and avoid that expression), what else can one say when it strikes you in this way?

Her "Better Job" clearly stabbed the zeitgeist with a musical stiletto and more recently "Used To Be" pulled zero punches. However "God's Little Punching Bag" expresses YNES' passion through a slightly different route which in some ways conveys still greater power (and at times possibly menace?). Her vocal this time is set somewhere between a growl and a breezy conversational tone rather than a rant and again given the nature of the lyrics serves to emphasise them. At times her words drip with sarcasm and though the title suggests a sense of possible self pity, what you get is absolutely not the case: it's a healthy dose of irony and defiance. I have to say that irony is one of my favourite aspects of lyric writing, not least because it is often the first casualty of people writing with commercial targets in mind.  One of my favourite music quotes is that of Elvis Costello: "irony is lost on pinheads" and I rejoice when I hear YNES and others deploying it.

Interestingly, she has emulated another Elvis approach in her musical setting: that of setting words to a music which seems to be the opposite of what you'd expect. Hence we get a marvellous piece of power pop: perfect for the summer, perfect for radio play and likewise for dancing. Without being too cynical, I suspect that there will be many people, especially existing YNES fans, who will "get" the full idea of "God's Little Punching Bag" but others who'll just love it without fully grasping her intent. These things happen & who minds if it introduces new people to her music? They'll get her in time.

I hope I don't oversell the single to you, but it really is a cracker: in a summer when we have had some really high quality releases already, it still stands out. It brought a smile to my face when first I heard it & frankly it's pretty addictive. In a benevolent way. Go on: try it yourself. I doubt you'll regret it.

Only the other week I was reporting on the enthusiasm of John Rivers of Woodbine Studios for the work of YNES, and here I am, fortunate enough to ...
[1 image] END_OF_DOCUMENT_TOKEN_TO_BE_REPLACED

When reviewing the last YNES single (the eviscerating "Better Job", which also featured Ace Ambrose), among several adjectives I used, one was ...
[1 image] END_OF_DOCUMENT_TOKEN_TO_BE_REPLACED