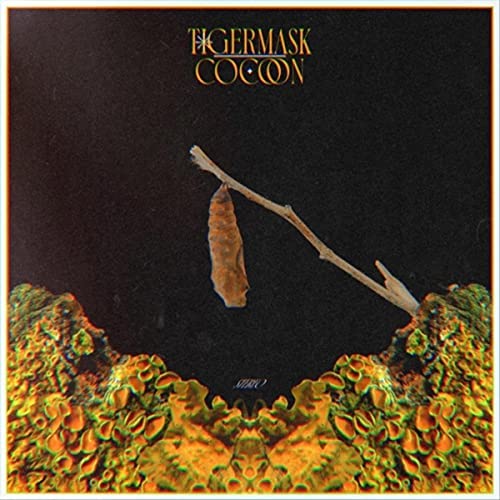 When I wrote last month about the latest single from Tigermask, "Mirtazapine", I told you quite a lot about its parent album ‘Cocoon' which in turn has emerged from its own cocoon this morning. In fact I probably ought to have held back some of the detail for today. Oh well…. To recap though or jog your memories, just as "Mirtazapine" sits in the centre of ‘Cocoon', the album is second in a three album cycle, following 2015's ‘Ovum', so it would help to listen to the earlier album before ‘Cocoon' and if you want to hear how the issues resolve, you'll need to wait for the conclusion of the arc.

‘Cocoon' comprises ten other songs as well as "Mirtazapine": "Mother", "Into The Woods/Cocoon", "Ballad of a Blind Man", "Doppel", "Rear Window", "The Spider", "Seizing the Void",  "Homeless_Path #1", "Homeless_Path #2",   and "Fever" and as noted in June, the first part of the album concerns the protagonist before he takes the anti depressant and thence the second part charts its (hopefully beneficent) effects upon him: reflecting Tigermask's own decade in the darkness of poor mental health before emerging into the artist we know today, capable of articulating his journey from a safe perspective. Once you appreciate that, then the analogy of the album's title makes much more sense. In fact it was brave of him to remove one track, however pivotal, from the whole to act as a single, as its meaning is greatly enhanced within the context of its setting.

In addition, I recommend your reading the detailed account of the album he has revealed on his website (too comprehensive to reproduce here): https://www.whoistigermask.com/cocoon

It's hard to critique any body of work so intensely personal and playing the songs can certainly give you the impression of being allowed to peer into the privacy of someone else's trauma: not always easy listening, but then I hope that at "Hot Music Live" we do not settle for easy listening and help share more challenging material: especially where mainstream media might be more reluctant. That's not to say that ‘Cocoon' is dissonant nor harsh: there is a great beauty throughout in terms of the sounds, though shot through with melancholia and filtered through our own understanding of what the songs are about.

There are resonances too with the work of other artists whose work is so familiar to us: it's hard listening to "Mother" not to equate some of its sentiments to the pathos of John Lennon's song of that name nor (if you are of such a persuasion) the Pink Floyd one. Equally "Ballad of a Blind Man" may have you thinking of Dylan, though in Tigermask's case, instead of a fierce diatribe against another, the power of the song is aimed solidly inwards.  Which may make you flinch a little as I did.

Thankfully, the album is an arc and once past the critical point, the music does mutate into more upbeat forms and become less harrowing in content and if you travel the whole road of ‘Cocoon' then you'll be glad you did. The end of the album offers hope (though resolution presumably will arrive with the final part of the trilogy) and really does not hit you with the full effect of that unless you have experienced the preceding tracks.

Tigermask is a very individual artist and to date has been focused on recording & releasing auto biographical material (although his live set does also feature covers), so it's no surprise that despite the allusions to the work of others, he has adopted a style which not only serves what he wishes to say in the best way, but owes little to others. As I say, beauty and pathos predominate through the very sparse and plangent approach and the quantity of space is more than sufficient to allow the impressions to settle in your minds and ferment. Most tracks have only a single dominant instrument (apart from "The Spider") and thus his voice is central at all times. The music itself often departs into other, non-Western cultural forms, melodies and modes.

I suppose that catharsis plays a very significant role in the creation of the whole three album cycle, and the length of time Tigermask has been taking to hone it suggests not only perfectionism but an indication that the whole process of working through his experiences in song is of value to him. Nevertheless, that in no way suggests that the album comes across as self indulgent nor inwards looking. Quite the opposite: it gives the impression that he wishes primarily to share his experiences in order to help others & communicate to them what he has found beneficial. Each song does stand on its own if necessary & none disappears up itself in terms of accessibility to those of us whose story it is not.

I don't know whether Tigermask has plans to play the album through live as a piece (it needs to be done though) and I fear that not many radio stations would care to play it that way either, which is a shame as it works best as a single, long suite of inter relating pieces. Nevertheless, it is a remarkable achievement and I hope you'll considering listening to it in sequence on the platform of your choice. It may also offer some sense of hope and optimism to those on a similar journey to its creator. I look forwards to the third part of the story.

It has been a while since we were able to feature Tigermask in the magazine (and in the interim, his standalone track "Timeless" appeared on ‘Hot ...
[1 image] END_OF_DOCUMENT_TOKEN_TO_BE_REPLACED

I have to admit from the start that I found writing a review which captures the essence of Tigermask adequately, having seen him play at the Town ...
[1 image] END_OF_DOCUMENT_TOKEN_TO_BE_REPLACED