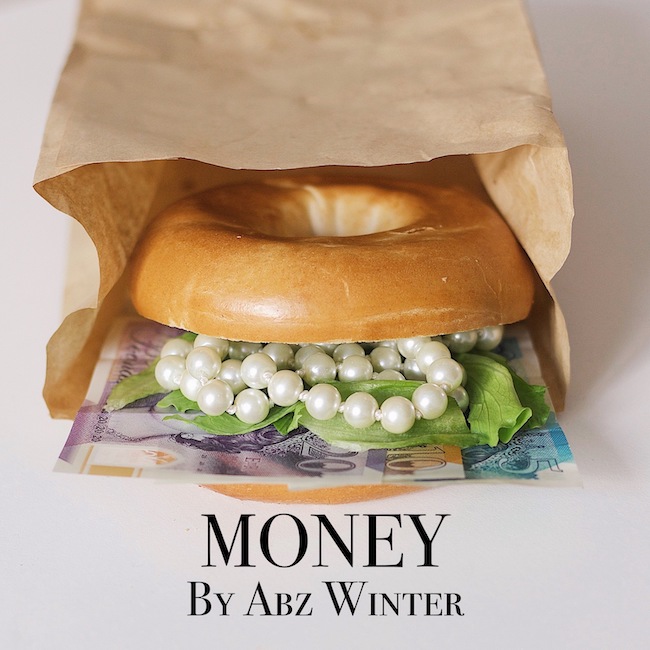 As her follow up to the popular "B.S.", tomorrow Abz Winter is releasing "Money". As with much of her very best & powerful work, the new song challenges the nonsense Abz sees around her and as I have said before, she is skilled at calling out aberrant behaviours without being nasty about the person: she seems to be aiming to reform people's way of treating each other rather than simply condemning them without hope of redemption.

This time round her gaze is levelled a little wider than in "B.S" or "Faker", both of which you get the impression were "inspired" by the actions of some person or people closer to home. With "Money", her target is much more societal and systemic: the damage created by the corruption to souls and values by the materialistic spiral of greed and lust for power and fame, fuelled by the commodity in the song's title.

As with her other work, Abz works hard both to suit the music to her words and to provide a varying listening experience with each release. In this case, the darker theme is reflected in the sound which broods more than her usual breezy persona and positively smoulders as she reveals the results of her contemplations.

Created, as with her previous few releases, with Matt Waddell at Leamington's 14 Records and mastered by El Sam at Elixir Productions, "Money" may tackle a serious & concerning subject, but it fits the Abz style of wriggling into our heads infectiously in order to makes its points. Quite slow for one of her tunes, it is based around an old school synth beat and frees her voice to be the main focus of the song: which is no bad thing.

Straight from the off she makes it plain that not only does she disdain greed & materialism but they possess no power over her: "I'm not afraid of losing you, you don't do anything". As she also says (though not in the song) "the lyrics are very relatable to the millennial age group I'm in, and we should all boss up! follow our instinct, only keep people around us that we know we can trust and cut the rest". I'm not sure though that the potential effect of the message is confined to that age group though: I am sure it applies much more broadly. Abz feels she is writing for her generation & no doubt that focus is helpful to her creativity, yet like all strong songwriters, her work has applicability beyond even her own intentions.

She is on quite a roll at the moment with three great singles in as many months and given the measurable spread of airplay for her, the inclusion on ever more playlists and the things said about them in reviews, it seems clear enough that news of her talents is travelling in the way we'd have envisaged for her pre-pandemic. Long may that continue to be so.

Out this morning, as a fanfare-free surprise for her fans, is a new EP from the irrepressible Abz Winter entitled ‘Just Wanna Be Me'.
[1 image] END_OF_DOCUMENT_TOKEN_TO_BE_REPLACED

As I'm sure most if not all of you are aware, Abz Winter was selected for the new television talent show "Walk The Line" at the end of 2021 and ...
[1 image] END_OF_DOCUMENT_TOKEN_TO_BE_REPLACED

That irrepressible artist Abz Winter is back on 8th October with her latest single "Under Me", her follow-up to "Money" from July.
[2 images] END_OF_DOCUMENT_TOKEN_TO_BE_REPLACED

Abz Winter has only gone and done it again hasn't she? I love the way that although her game has never needed raising (it's been at the top ...
[2 images] END_OF_DOCUMENT_TOKEN_TO_BE_REPLACED

It's actually been a year since we shared the news about "Jump" by Abz Winter with you, a period of time between releases which would have ...
[1 image] END_OF_DOCUMENT_TOKEN_TO_BE_REPLACED

It's good to be able to report to you that Abz Winter is following up her very well received (not least in the review in this magazine) single ...
[1 image] END_OF_DOCUMENT_TOKEN_TO_BE_REPLACED