"Bring Back the Feeling" by Danny Ansell 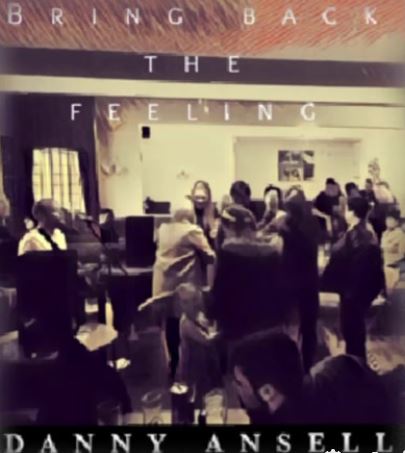 The most recent occasion on which we reported on Danny Ansell and his music was back in April, with the release of his "Slice of Cake" single. Now, the time has come to follow up that life & career highlight and so you'll be able to hear and to enjoy "Bring Back the Feeling" at the end of this month.

It cannot have been at all easy to find a song to succeed "Slice of Cake" and given the singularity and significance of that track, no reason at all the try to top it or emulate it. Very wisely I feel, the new single is therefore a more upbeat (in tempo & mood) song and surely his mum Maureen, the subject of "Slice of Cake" (and the ‘Hot Music Live Presents Vol 5' dedicatee) would thoroughly approve: indeed in other circumstances she would have been first onto the floor for it.

Written naturally by Danny and recorded at his home studio with the help of Patrick Beard on drums and bass (Danny playing piano & guitar as well as singing), "Bring Back the Feeling" is an archetypical Danny Ansell song. Even without totally unforeseen and sad circumstances affecting his songwriting over the last year or so, he had been experimenting to excellent effect with a more introspective and reflective style within the ‘As It Goes' album  and its follow up EP ‘Stories About You'. I applaud this and greatly appreciated what he achieved: it certainly showed people the breadth of his talent and they ended up (perhaps more by luck than judgement given that many were written pre-pandemic) being right for the times.

Now however we need lifting after sixteen or so very difficult months and with the prospects for getting back together and for live music, "Bring Back the Feeling" fits this moment equally as well. Harking back to his Britpop roots, this track carries all the hallmarks of the style his considerable following will both recognise and respond to. How he can keep on writing such crowd pleasing, anthemic, hook filled tunes without repeating himself is something to instil a sense of wonder (possibly the period exploring slightly different musical avenues has helped keep this aspect of his work fresh). This is yet another in a long line of his songs which will get the crowds back on the feet dancing (and singing along) in the traditional manner. It certainly helps that the subject matter of the song fits that feeling of liberation and refinding that which we have lost in recent times.

Danny & Patrick sound pretty liberated in their performance (though can you think of a Danny Ansell record where he doesn't throw himself fully into the power & passion of the song? No: me neither) and it surges along with all the drive and dynamics, punctuated by clever little touches and variations you'd expect.

I am keen to hear it live (though that can be said of quite a few of his songs which have been created over the last couple of years but which I've not yet heard in concert) and Danny also advises me that drummer Steven Shelley will be joining the band from the 23rd July (when they'll be supporting The Session at The Arches in Spon End).

Before that, Danny is playing the New Railway Inn in Leamington this Saturday (10th July) and will be again on the same bill as The Session at the Freedom 21 Festival on Saturday 21st August.

The first Danny Ansell release of 2022 has been revealed as "Jericho", which follows December's "Wishing Well".
[2 images] END_OF_DOCUMENT_TOKEN_TO_BE_REPLACED

It's a great & somewhat rare privilege to give you as much notice as I am here with Danny Ansell's next release "Wishing Well" as it ...
[1 image] END_OF_DOCUMENT_TOKEN_TO_BE_REPLACED

Despite his skill at honing crowd pleasing anthems, the reality of Danny Ansell's songwriting is the subject matter he covers is actually very ...
[1 image] END_OF_DOCUMENT_TOKEN_TO_BE_REPLACED

One of my personal sadnesses (among several) for our local music scene was  that Danny Ansell's long awaited ‘As It Goes'  album came ...
[3 images] END_OF_DOCUMENT_TOKEN_TO_BE_REPLACED

I've said it before, but I'll say it again, I especially enjoy (and enjoy writing about) music where it touches base with other art media.
[1 image] END_OF_DOCUMENT_TOKEN_TO_BE_REPLACED

‘Satellites'   is the most recent single by Danny Ansell & Co (Danny Ansell on vocals and guitars, Roger Greasby on drums and Patrick Beard ...
[1 image] END_OF_DOCUMENT_TOKEN_TO_BE_REPLACED